MFAH Names New Board Chair to Lead Museum’s Next Phase 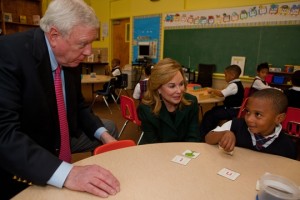 Rich and Nancy Kinder on a classroom visit. Photo by Mike Feldman

After its annual board meeting on Tuesday, The Museum of Fine Arts, Houston (MFAH) announced that Richard D. Kinder will succeed Cornelia Cullen Long as Chairman of the Museum’s Board of Trustees.

Mrs. Long will move into a new role as head of the future capital and endowment campaign for the Museum’s planned campus redevelopment. During more than 30 years as a trustee, Mrs. Long has served on every single board committee and, in her six years as Chairman, led the Museum through some big changes, including the transition following the death of longtime Director Peter Marzio. In recognition of her tenure, the board also passed a resolution appointing Mrs. Long Chairman Emeritus.

Mr. Kinder, co-founder and CEO of Kinder Morgan, has been a trustee of the MFAH since 1988 and chaired the search committee that recruited Director Gary Tinterow in 2011. He and his wife, Nancy, are widely known for their philanthropy, including the establishment of the MFAH’s Kinder Foundation Education Center.

Mrs. Long passed the baton with the following statement:

Rich has been deeply engaged with the Museum of Fine Arts, Houston, and in particular its educational and civic mission, for 25 years. I cannot imagine a stronger leader for the Museum as the institution begins this next chapter of its growth and its commitment to the city and people of Houston.