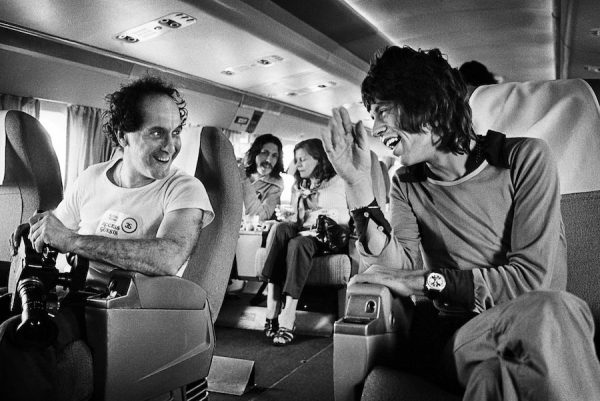 Swiss-American photographer-filmmaker Robert Frank is best known for the groundbreaking book The Americans — an essay comprised of photographs he took along cross-country travels in 1955-58 — and for his early, underground Beat film, Pull My Daisy (1959), a collaboration with Jack Kerouac and painter Alfred Leslie. Lesser known to most — or, in some circles, known but famously unseen — is Frank’s Cocksucker Blues, a film documenting the 1972 U.S. tour of rock group the Rolling Stones that has never been officially distributed theatrically or released on any home video format. The Museum of Fine Arts, Houston will soon present two special screenings of this Halley’s comet of rock docs on April 12 and 14. 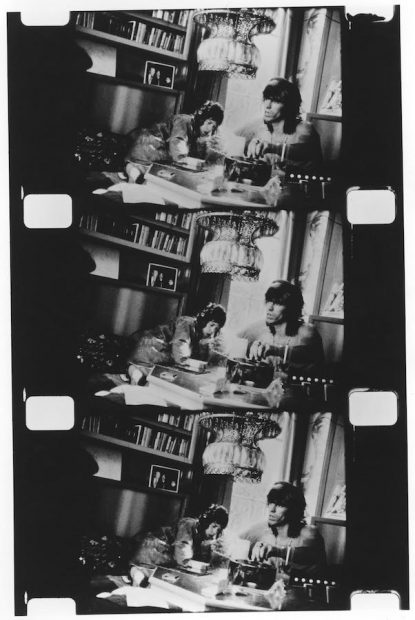 Cocksucker Blues (the film’s title refers to a Stones song submitted as a final, arbitrary “fuck you” to Decca Records before they departed the label) is an odd, funny, tedious and fascinating document depicting the group, their followers, and life on the road. Using small, handheld cameras, Robert Frank’s grainy black-and-white photography finds people and moments — most real, some staged — in sex play, drug use, hijinks, and boredom between shows, with scattered concert performances shot in saturated color bursting through with raw energy.

At the time, the group had been fractured by financial woes, management change, personal and artistic tensions, and, most of all, heavy drug use by some of its members and entourage. The album Exile On Main St. was just as fractured, with songs recorded in various studios over three years, often without all band members present at the same time. Now considered one of the Stones’ best albums, at the time of its release, fans and critics had to sit with Exile for a while before appreciating it. The double album, with its different styles, long jams, odd mixes, and few hits was, in a way, saved by its cover art. The photomontage sprawling across its four sides quilted together images of the band taken by Robert Frank, as well as photos taken from Frank’s The Americans series. The intriguing imagery and odd juxtapositions gave the sense that the album’s music was not just a sloppily assembled shark-jump, but rather (or additionally) a complex, layered collage and an important new work. The cover provided encouragement to take time with the album, with evocative images to engage with while listening. Before embarking on their 1972 North American tour in support of the album (their first U.S. tour since the 1969 disaster at the Altamont Free Concert), Mick Jagger invited Frank to chronicle the band’s journey.

While it follows one of the great rock bands in an important phase, Cocksucker Blues is no ordinary documentary, and not really a music film. Generally categorized as cinéma vérité, it’s much more subjectively engaged than a simple fly-on-the-wall film, and more experimental than a historic profile. Frank, arguably the best example of a still photographer’s successful transition to filmmaker, is drawn to shooting the normally unseen rough edges and odd moments along the tour in hotel rooms, planes, rehearsals, green rooms, parking lots. The camera often moves away from the band to find tangential satellites and interactions — a woman’s reaction to the band, or a cat walking across the room.

At first, the straying attention, off-kilter compositions and nearly continual camera movement may seem easy — even sloppy and amateurish. This is emphasized by the fact that Frank gave cameras to band members and included some of their footage. The scarcity of concert footage (great stuff, but only a handful of songs) and complete lack of informational titles/credits may be off-putting to those expecting a more traditional doc. But Frank’s approach of unabashedly showing and involving the viewer in the process of looking becomes a hypnotic, then completely engaging, then somehow personal experience. That’s no simple task. The film’s handheld camerawork is a masterful extension of Frank’s eye and creative mind. 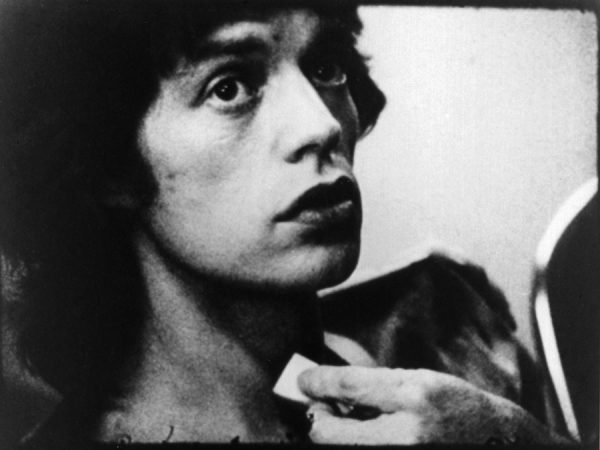 The most amazing thing about Cocksucker Blues is that it ever happened at all. It’s so unlikely. Robert Frank had absolutely no interest promoting, sensationalizing, or immortalizing the band. He was not an adoring fan, nor a photographer for hire. Frank was an artist, commissioned to make his own film along the journey of the tour. He made clear to the group that if they ever once said “no” to any of his ideas or filming activities, he’d abandon the project. That was the deal, the band was game, and the result is truly unique.

Along with, and much more so than Frank’s images on the album cover, this film helps to reveal what the album title Exile On Main St. really signifies. Viewers are brought inside a peculiar travelling circus — a bubble that totally excludes the outside world, and in which wild life, frictions, and harsh juxtapositions are all part of the boring daily wait between shows. Tina Turner, Dick Cavett, Andy Warhol, Truman Capote, Princess Lee Radziwill, Atlantic Records founder Ahmet Ertegun, Jagger’s then-wife Bianca and other notables briefly visit the bubble, reminding us of its location in space, time and culture. There is a great and odd performance with opening act Stevie Wonder. But more present are the groupies, junkies, crew members and the band members themselves — exiled, waiting until nightfall to make their powerful sound.

It’s generally understood that the group liked or at least appreciated the film — unofficially, that is. But it was way too messy, real, confusing, dangerous, and painful, and embarrassing for them to officially claim. What they’d ended up with was a tour documentary that contained more roving tangents than through-line, more hotel room boredom than performance footage, and more questionable and even illegal activity than was safe to be associated with publicly. Giving Robert Frank funding and carte blanche had been both a brilliant and disastrous idea. He’d done what he set out to do a little too well: make a Robert Frank film.

The Stones buried the film — immediately and completely. Frank was prohibited from showing it at all for many years, then later they reached an agreement stating he could show it once a year but had to be present. This has loosened up just a little bit in recent years, but the film will likely never receive proper distribution or an official approval from the group.

The reason Houston is so privileged to host rare, occasional screenings of this film is a special relationship between Frank and the Museum of Fine Arts, Houston. In 1986, when the museum was preparing a major retrospective of his work, they purchased many of his photographs and also became the official archive and distributor of his films, giving his life’s work a better home than his musty closet.

Cocksucker Blues was first shown in Houston 33 years ago as part of that retrospective. It was held at the now defunct Tower Theater, and more than a few well-to-do museum supporters fled the screening within the first fifteen minutes. MFAH’s current web listing warns that it is for “mature audiences only,” and I’ll add to that warning some possibly triggering scenarios for those averse to witnessing drug use and iffy sexual activity. Though I can’t imagine that, today or back then, the title wouldn’t sufficiently tip off audiences to the uncivilized nature of the film’s subject. This movie is not for the kiddies, nor for sensitive adults. This is a strange photographer’s raw observation of a legendary mess.

A version of this article was published in March of 2013, the last time the MFAH presented a screening of the film.