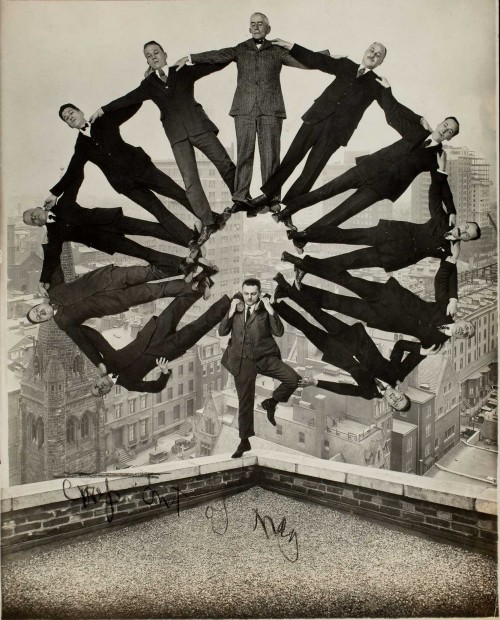 The Museum of Fine Arts Houston’s Faking It: Manipulated Photography Before Photoshop, organized by The Metropolitan Museum of Art, is a dense, sprawling exhibition that spills outside the gallery space and into the surrounding hallway. The sheer number of works, spanning over a hundred years with the earliest work from 1846, convincingly drives home the simple premise: photographic manipulation after the shutter has been clicked, or “postproduction,” has been a part of the process since the medium’s birth. It also implicitly shows that our contemporary reliance on digital effects is a new means to realize old tendencies of erasing or adding, compositing images to create fabricated scenes, and even retouching a wrinkle or two. In the exhibition, photographers manipulate their images toward different ends. Some are moody and Surreal, whimsical and fantastical, beatific and idealized, and others attempt to mimic documentary photography without any trace of manipulation. All of this is done for the sake of art, entertainment, news, advertising, and political propaganda. 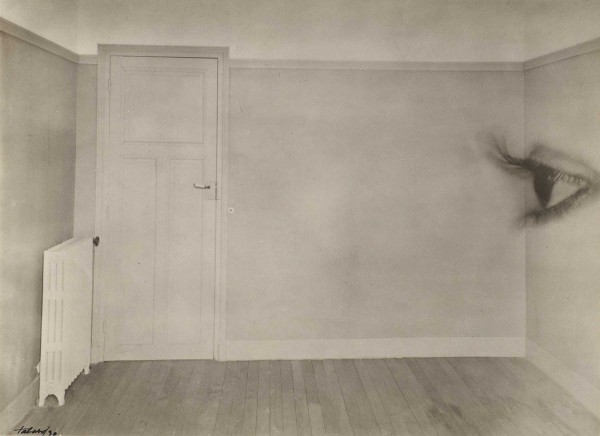 Outside the main gallery space are the more moody examples by Surrealist artists. Grouped under the heading the “Mind’s Eye,” these works from the 1920s and 30s are theatrical montages representing anxious, interior landscapes dealing with self-perception and identity. Maurice Tabard’s Room with Eye (1930) shows a giant, long-lashed eye staring into an austere room. Wanda Wulz blends her face with a housecat’s to become half-feline. Herbert Bayer’s The Lonely Metropolitan (1932) shows a man’s truncated arms with eyes embedded in his palms cut and pasted to hover above a grim tenement building. Like their Pictorialist predecessors who are also in Faking It, these photographs self-consciously divorce photography from its role as a simple external transmitter of objective reality. They do not follow the ethics of “straight” photographers like Ansel Adams, Paul Strand, or Edward Weston, who regarded such manipulation as “impure.” These Surreal images still heavily borrow though from photography’s representational power and link to reality. For example, that is supposed to be a “real” eye and a “real” room. They also unintentionally slip into kitsch and have a contrived feel as manufactured dreamscapes, where the combined elements literally illustrate psychoanalytic theories. 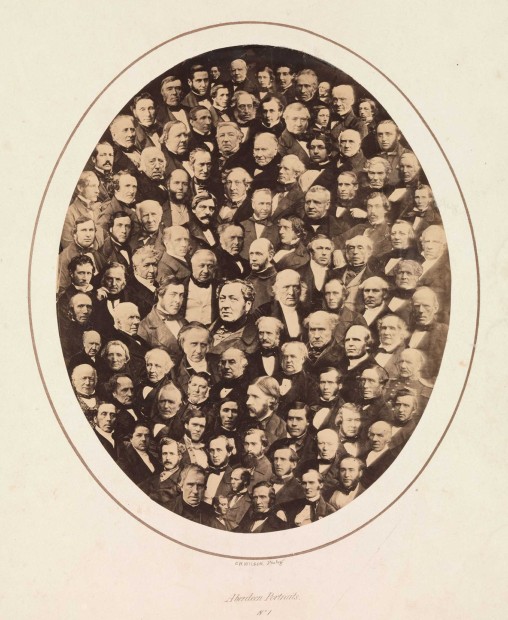 These images by Surrealist photographers and a few others by Pictorialists, like Edward Steichen, are intentionally made to be serious art, but many of the works in Faking It made for the everyday world of politics, fashion, entertainment, and advertising, offer more punch, freshness, and surprise. For example, an unknown photographer’s cut and paste rendering of acrobatic businessman balancing atop a skyscraper and linking arms is refreshing for its levity. It is nothing more than what it is and pleasurably indulges in the power of manipulation where the rules of gravity and all else can be thrown out the window. In another work, George Washington Wilson created one of the first photomontages in the simple hopes of promoting his business as a portrait miniaturist. In Aberdeen Portraits No. 1 (1857), Wilson piles head upon head of clients to create an incredible communal portrait. 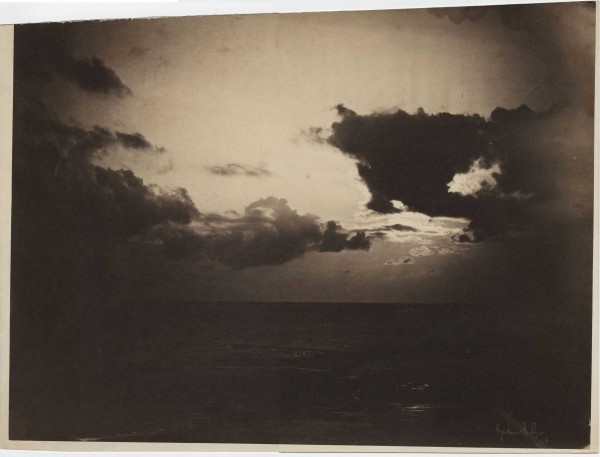 Wilson’s wonderful image is included in the first gallery and grouped under the heading “Picture Perfect,” which tries to explain these techniques, such as photomontage, and how they were often used to idealize their subject matter. Photography of the 1850s/60s is presented as a mechanically limited field trying to mimic many things easy to achieve in painting: a crisp depth of field, a high range of exposures, not to mention color. For color, they went to the known source, painting. It is an ironic reliance and shows that what is often thought of as an adversarial relationship between painting and photography can also be seen as a more complex exchange of techniques. Crisp, flat over-painting, allowed for the seduction of color without the sensuality and texture of paint. J.I. Williamson’s Clock (ca. 1882) is a luxurious illustration of an ornate clock with incredible detail, as if saturation and sharpening had been pushed to the max in iPhoto. Also, natural scenes, like Jean Baptiste Gustave Le Gray’s Etude de nuages (Cloud Study) (1856-57), use multiple exposures and painted in skies to avoid completely blank, blown out horizons. In one of my favorites, an unidentified French artist used a selection of photomontages to construct a photo of a headless cavalry soldier painted in an immaculately blue uniform as he gallops valiantly forward, saber raised. Because it was impossible to capture a soldier in action at the time without the use of handheld cameras and fast exposure times, a commercial photographer would set up by the battlefield and take a soldier’s portrait to later plop into the heroic scene. 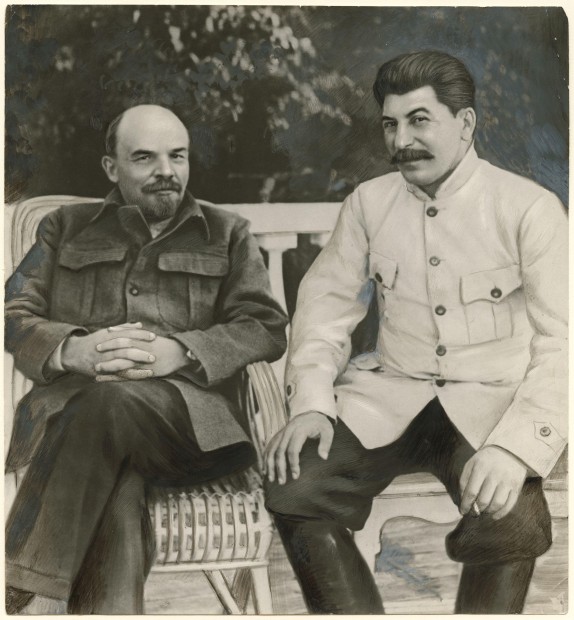 In general, Faking It is most enjoyable when these techniques are shown as means to specific ends. “Politics and Persuasion” presents images edited at the command of dictators and, on the other end of the spectrum, satirical images where political leaders are distorted and transformed into caricatures. A chilling series shows before and after images of Stalin in pictures with people who later fell out of favor, were killed, and erased from the photographic record. Also on view is Mao ZeDong’s shiny, impossibly unblemished face. Another interesting inclusion are composite images where individuals are overlaid above one another to present distorted, grotesque faces in attempts to phenotypically sort out different “types,” such as criminals, using photography as a tool for scientific analysis. Lewis Hine’s Composite Photographs of Child Laborers (1913) is particularly creepy, and it is not surprising that he never published the photograph. 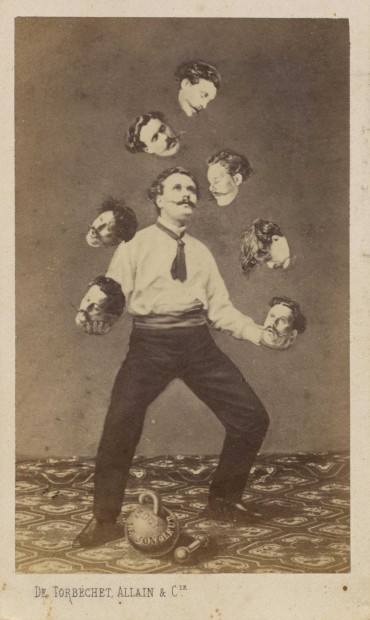 Manipulating images to create grotesquerie is a prominent part of my favorite part of Faking It: the “Novelties and Amusement” section. Here, a man juggles his own decapitated heads, others present their own heads on platters and, in a particularly amazing and funny image, a row of headless soldiers clutch their severed heads by their waists like helmets. Also featured are images of people with their double or doppelganger, such as Toulouse-Lautrec sitting for his own portrait, “spirit” images of people with “ghosts,” and “tall-tale” photos of gargantuan bunny rabbits and giant ears of corn. Many of the images are comical and left me wondering less about the techniques of manipulation, and more about what fueled the cultural imagination of people at the time to commission and buy such oddities. Faking It skims the surface of the cultural context because the broadness of its premise makes it difficult to delve into. It is as if there are seven individual exhibitions within this general survey with plenty of individual threads and works that are worth thinking about and seeing. Yet fakery on its own, divorced from cultural context, is not all there is to these images. 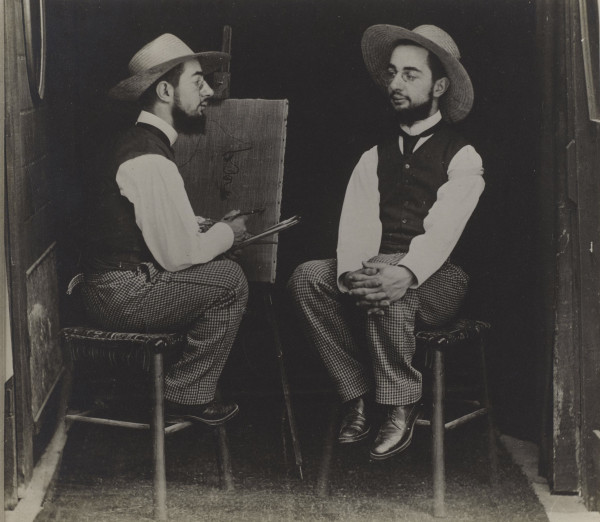 Looking for the cultural meaning behind the images as I read many of the wall labels, it became apparent that fakery is always a means to something deeper. For example, in one particularly famous image included in the exhibition by Henry Peach Robinson, Fading Away (1858), Robinson controversially fabricated a scene depicting a bedridden woman dying of consumption, or possibly a broken heart, as the romantic Shakespearean title, “She Never Told Her Love,” suggests. The subject matter was considered morbid and too intimate of a moment to capture and publicly reproduce. Robinson defended his artifice in his writings: “I am far from saying that a photograph must be an actual, literal, and absolute fact … but it must represent truth.” Robinson’s justification reminds me of contemporary arguments surrounding documentary filmmaking, and filmmaker Werner Herzog’s famous bullet-point manifesto on truth and fact in documentary cinema. In point number five, Herzog states: “There are deeper strata of truth in cinema, and there is such a thing as poetic, ecstatic truth. It is mysterious and elusive, and can be reached only through fabrication and imagination and stylization.” Faking It‘s often lighthearted and fun tone may not leave you reveling in “poetic, ecstatic truths,” but it often shows the human truths driving these images. Just as in our Facebook/Instagram filled culture of today, we will always try to make our world seem a little better than it is, promote ourselves in battle, business, or politics, delve in flights of imagination, attempt to preserve memories, and tweak an image to feel right if the captured “reality” just does not quite seem to match.

I just love the man painting himself by Maurice Guibert. Just awesome.