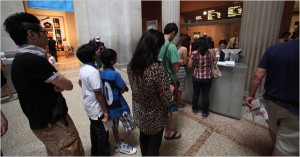 The Metropolitan Museum of Art in New York is being sued by two of its members who claim that the  museum intentionally makes it difficult to understand that the $25 admission charge is merely a suggestion, not a requirement. The City originally granted the Met its prime location in Central Park on the condition that it remain open free of charge several days per week; even the suggestion of an admission charge only began in the 1970’s. A survey of museum-goers found that 85% who had paid the $25 at the door did not realize they could have gotten in for free.
*recommended

Want to Live at the Metropolitan Museum of...

After reading this, we went yesterday and were not allowed to enter without purchasing a $25 ticket!!

So “recommended” is CYA crap. The security guard would not let you in without a ticket and the ticket teller charges $25 each adult for one.