Blockbuster Bust: Australian Rags Masterpieces from the Prado for Lackluster Attendance, Opens at MFAH on December 16 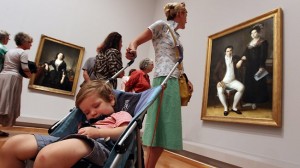 The Australian Newspaper gleefully reports that Australians did not flock to see the blockbuster Portrait of Spain: Masterpieces from the Prado, on view for the past fifteen weeks at the Queensland Art Gallery in Brisbane. In typically Australian muck-raking style, the newspaper points out that the show, booked by former director Tony Ellwood (who then went south to take up the directorship at the National Gallery of Victoria), cost the government $6 million, and had half the attendance of Picasso and Valentino Blockbusters, about equal Matisse and Surrealism.

The show’s only other stop outside Spain is the Museum of Fine Arts Houston, where it is scheduled to open on December 16, 2012.