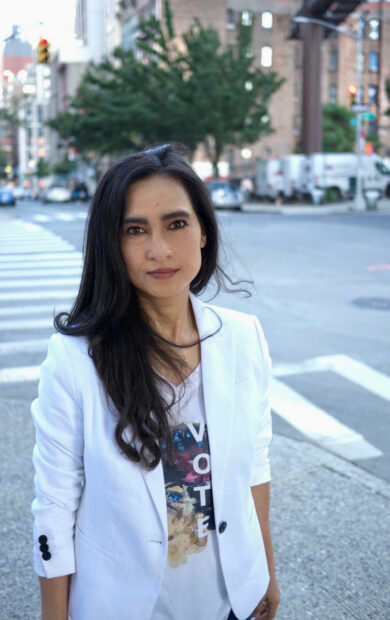 Shahzia Sikander’s exhibition Extraordinary Realities features drawings produced early in the artist’s career, from the nineties to the early 2000s. We sat down to chat about her origins in the historical genre of illuminated manuscript painting, her infusion of contemporary subject matter and experimental media, and her Houston connections.

Caitlin Duerler Chávez (CDC): Your exhibition Extraordinary Realities at the Museum of Fine Arts, Houston (MFAH) features your early career work, including your first miniature portraiture masterpiece The Scroll (1989-90). When you created the piece, you were working in a style that the art world dismissed in favor of Western abstraction. What inspired you to infuse this historical genre with a contemporary perspective?

Shahzia Sikander (SS): When I first began painting, I thought “why is this artform considered in a very restricted manner?” It was just a norm of the genre that you learn by doing a copy here and there, and then one could create a contemporary engagement that was just a little bit of a shift from the copy, like a contemporary wedding or a contemporary dramatic thing like a festival. At the time, when I was in school, I thought about abstracting the anxiety of being a young person. Issues like identity, which you were discovering as a teenager. So one of my departures from the traditional genre is that I tried to capture something that was more abstract.

CDC: Historically, the genre of miniature portrait painting represented Mughal imperial life, Hindu epics, and stories from the life of the prophet Muhammad. Using the techniques and pictorial language of the genre, you infuse your work with feminist content. Why was it important to you to include this perspective in your work? 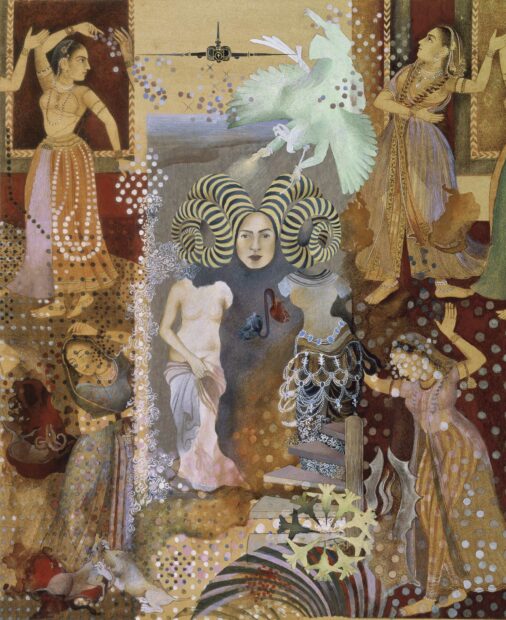 CDC: In your work Eye-I-ing Those Armorial Bearings (1989-97), one of the figures appears to be Houston’s own Rick Lowe. Why did you include him in this work?

SS: Critical thinking, creativity, and collaboration are the three tenets on which I have built my understanding of being an artist. How culture, society, and economy intersect and how communities coalesce plays a role is how art functions in overlapping spaces. Houston had a small South Asian diaspora that artists and writers and myself made an effort to engage with, and we would often connect our community with others at Project Row Houses (PRH) in the Third Ward for spontaneous gatherings. In that respect, I was aware of my role as a bridge between communities of color that would not otherwise interact. The shift in my work started to happen through more unorganized forms of agency — informal discussions, participation, sharing of ideas, and feeling heard and nurtured. Spoken word, storytelling, jazz, literature, poetry, and shared territories of struggle offered new political spaces.

Rick Lowe was instrumental in facilitating such conversations and was also one of the founders of PRH. I was invited to create work at PRH in 1996 and to teach miniature painting there. During that year, my conversations with Rick Lowe and his mentor Jesse Lot led to research about the representation of Black people in medieval western manuscripts. That led to the series Eye-Iing Those Armorial Bearings (1989-97). Some of the iconographies I created for that series juxtaposed and reimagined entrenched and contested historical symbols, such as the orientalist representation of the Muslim female and anti-blackness in art historical traditions. I used Rick Lowe’s portrait juxtaposed to the armorial seal I created for Project Row Houses.

CDC: Narrative is an important driving force in the paintings in this exhibition of your early works, with figures and compositions full of storytelling potential. In your more recent practice, you have been working with film. Is there a relationship between your interest in narrative in the works on paper in Extraordinary Realities and your turn towards filmmaking?

SS: Drawing is an integral aspect of my art. It creates an armature of research, clarification of ideas, and connects thinking to gesture, to action, to practice. It also allows collaboration to foster. For example, for my animated works, drawing functions as the libretto. 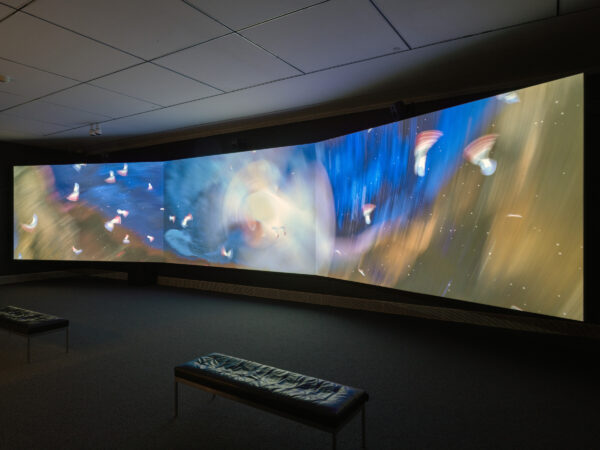 Drawing implies movement in time and across formats and mediums. It’s a means of imagining and bringing forms to life. Space, velocity, magnitude, direction — all essential elements inherent in the process of drawing — become active in different ways through thought and action, through animation and music, by linking time-based mediums to the act of thinking. I started animation as early as 2000, during a residency at Artpace in San Antonio. My first film, Intimacy (Collection of the Blanton Museum of Art, UT Austin), was created there but it did not have music. As I kept developing films using drawing and animation, I became interested in collaborating closely with composers, lyricists and poets. Music also adds another notational path to narration in my film.

CDC: Extraordinary Realities traveled to the MFAH from RISD. How has the exhibition layout been adapted to the gallery spaces at the MFAH?

SS: For each venue — the Morgan Library, RISD and MFAH — I created the on-site work Epistrophe, a large group of transparent drawings layered and attached directly to the wall. The nature of the work is such that it shifts every time. At the MFAH, the piece was adjusted to accommodate the gallery’s lower ceilings. I made the changes while installing the piece on site. 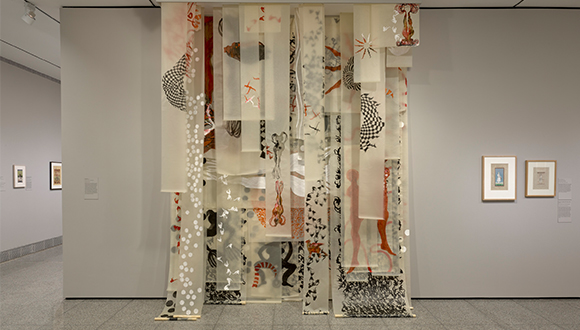 At the MFAH, we are exhibiting Parallax, the multichannel film from 2013. Both the MFAH and Whitney Museum recently purchased it as a joint acquisition, and the curators at the MFAH thought it was a good opportunity to show it alongside the Extraordinary Realities exhibit.

CDC: In addition to the show at the MFAH, you also have a public art work at the city’s Midtown Park, Mary-Am (2020). How did this commission come about and why were you interested in working in mosaic? 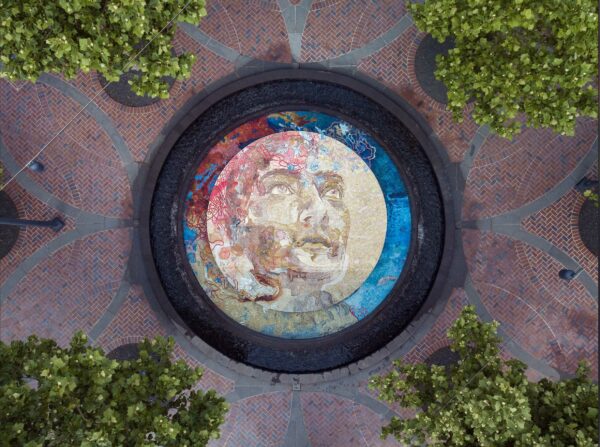 SS: I first began experimenting with glass and stone mosaic in 2015 on a large scale as a 70-foot permanent public art commission for Princeton University. Glass was a natural direction, as much of my work deals with transparency and light. The mosaics are made from colored glass and are conceived as paintings. What led me to mosaic was animation. It was the dynamism of the pixel that emerged in my mind as a parallel to the unit of a mosaic. With that approach, I was keen to explore mosaic as an animated and less static form. Mary-Am was created in 2019 as a mosaic portrait and a fountain to be part of the Midtown Park. It is a celebration of the subliminal feminine force present in nature and in all cultures and religions. The female faces emerge from the water and from within the painterly marks and gestures, and the portrait’s upward glance is symbolic of its soaring, inspiring premise: the human journey of creativity and strife.

Shahzia Sikander’s exhibition Extraordinary Realities was on view at the Museum of Fine Arts, Houston through June 5, 2022.

Here are the plans for the MFAH’s new...