Houston, the local press delights in announcing, is positively blessed to be included in this summer’s James Turrell extravaganza also happening at LA’s LACMA and New York’s Guggenheim. It is a major boon to the growing strength of Houston’s art infrastructure to be named in the same breath as those museums, but I just wish that Houston’s Turrell show had been better executed.

The pieces themselves, all in the Museum of Fine Art’s permanent collection, are magnificent and varied examples of Turrell’s work and rival the collection of light works on view at the LACMA’s Turrell retrospective. The MFAH’s exhibition of them, however, is embarrassingly lackluster.

Of course, I’m a little ruined for having seen the LACMA’s phenomenal Turrell retrospective earlier this summer. There, the museum has taken great care in the display of Turrell’s pieces: the moment you enter the exhibition hall, the lighting is very subdued and the walls have been arranged, labyrinth-like, to gently guide you through the show so that each piece emerges from the darkness like a revelation of light. The experience was like being in a glowing, sci-fi trance on another planet brimming with strange wonders. The LACMA never breaks the spell: the lighting is consistently dim and little information is divulged within the show about Turrell’s methods of construction. Each piece exists as a puzzle to be unraveled, with time and care, within the mind of the viewer. 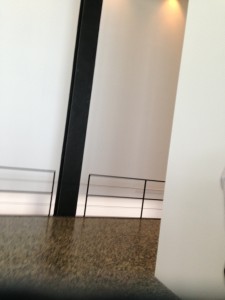 Houston’s Turrell show is entirely lacking in the mystical quality that made the LACMA’s so compelling. The MFAH was not nearly as careful in its presentation choices and the exhibition, in fact, feels sloppy. The pieces are arranged, in seemingly no specific chronological or thematic order, in small antechambers built into the main exhibition hall, which, unpleasantly enough, faces a major construction area in the Museum’s Cullinan Hall. Granted there is no actual construction during exhibition hours, but emerging from each of Turrell’s subdued and minimal environments into a visual mess of scaffolding and plastic sheeting makes for a less than cohesive experience. Not only is the main hall a construction site, but it’s a relatively well-lit one to boot. The hall’s massive windows are only half-heartedly covered with thin curtains, allowing enough of the glaring Texas sun in to make the transitions between Turrell’s rooms jarring.

I am also disappointed in the MFAH’s patronizing labeling. Almost every entrance point includes an explanation of how the piece inside was constructed, diminishing the wonder and mystery of Turrell’s work before the viewer has even had the chance to experience it. Turrell’s Wedgework, a version of which was on view at the LACMA, is absolutely ruined by with its inconsiderate labeling. As the piece was installed at the LACMA, with a minimal label giving only title and date, it emerged from near total darkness as a glowing sci-fi set, seemingly continuing on and on forever into the blackness of the museum’s far reaches. I was, for a minute or two, absolutely unsure if the expansive environment in front of me actually existed or if it was a hallucination brought forth by Turrell’s mastery of light. The answer of course was both, but it was intensely thrilling and fun to observe my brain slowly piecing together what was actually happening in that room. The LACMA’s Wedgework was absolutely one of the most disorienting and original experiences I’ve ever had, in a museum or elsewhere. 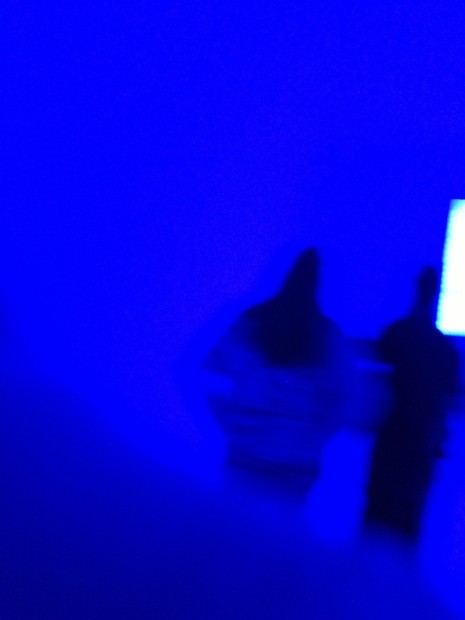 The MFAH, in my mind, ruins its Wedgework by blatantly spelling out how the illusion is created at the entrance. Granted, I had already seen a similar piece not too long ago so my experience this time around was not as strong as someone seeing the technique for the first time, but giving explicit instructions for deconstructing the mystery is tantamount to sabotaging a first-time viewer’s experience of the piece.

I feel that the MFA missed its chance to be counted among the nation’s great art museums—this show should have been their moment to pull out all stops and put on a breathtaking show with the phenomenal array of Turrell’s work in its collection. Instead, the show will only be remembered (if at all outside of Houston) as the underwhelming dud of Turrell Fest 2013.

I totally agree on the messy construction, but honestly, if you don’t want the added information then don’t read it. Personally, I like to make two runs through an exhibition: the first purely for the aesthetic bliss of it; but then I like to go back for a second, more careful look, and read all the provided information as it often puts the work more fully in context and enhances my enjoyment of it. On the first run I make my own interpretations, but on the second I learn more about the artist’s intentions and techniques. These are just as important to me as my own feelings about the work. I follow a similar tack with works of literature – think of reading Lolita once for the pure joy of it, and then reading it more assiduously to discover all Nabakov’s clever hidden clues. This method works for me.

A Physics professor from Rice University went to the MFAH show with me after reading the review from NY Time’s magazine. Expecting the experience of seeing the desert sky from a crater, we were a bit disappointed. But I still appreciate the Time’s writing and the labeling at MFAH.
Blue sky in the desert, blue light in the museum, blue color on canvas, and the writings about the blue colors gave me such different experiences.

Is that you Quilty?

The question of didactics in exhibitions is a long-standing debate. There are well-worn opinions as to whether or not there should be labels to guide the viewers interpretations, and if there are, what information they should include. Ok, cool.
Two things though:
– The show actually is in chronological and thematic order. The only piece that is not is “Rondo” from 1971 next to “Aurora B” from 2010. I think these things were put together because they relate to the famous light tunnel that connects the two buildings.
– The wall text in question regarding “Wedgework” blatantly spelling out how the illusion is created, and giving explicit instructions for deconstructing the mystery… well see for yourself:
“James Turrell received his pilot’s license at the age of 16 and he remains a passionate aviator. For the artist, his airplane has also served as his studio, and he has drawn inspiration from atmospheric phenomena. “Wedgework” refers to the effect that occurs when two weather fronts meet; the cooler, denser front “wedges” under the warmer front, which then rises. Flying through this juncture, a pilot can observe a visible change as well.
In his Wedgework series, Turrell uses projected light to slice across space and generate layers of illusion. He explains: “When flying, this differentiation of vision happens through weather and water vapor. In [Wedgeworks] similar qualities of opacity, translucency, and transparency are created by light simply inhabiting space.”
I don’t see any instructions here spelling out anything. I always knew Turrell worked with projected light to create illusions.
Frankly, the guards yelling at me to stop trying to touch and smell the works almost ruined the show for me. Labels don’t bother me, I don’t know how to read anyway.

Seth – thanks for the direct quote – I totally could have been clearer about my problem with that label but was working from memory on the actual words but! it was specifically “slices” and “generate layers of illusion” that had me all bristled. Walking into the room knowing to look for slices in the space and being clued in that what I was seeing was an illusion just killed the fun – the construction of the space, rather than its effect, became the focus.

And I totally agree – the guard presence was oppressive. Especially when the ones outside of the Wedgework were loudly discussing their favorite salads. Not ideal!

You forgot to mention the guards ruining the Ganzfeld, which is worse because you can at least ignore the construction and windows when you are inside the works.