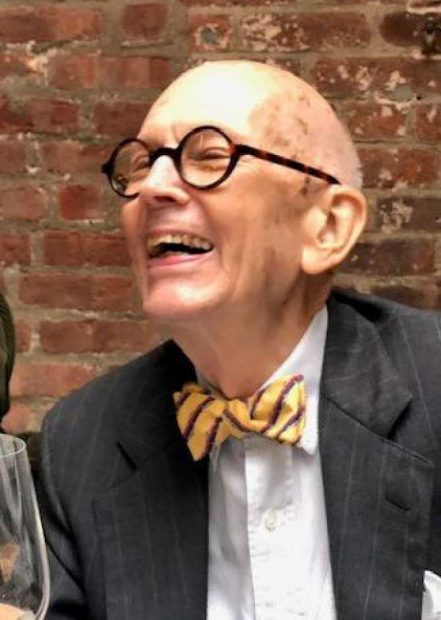 Bill Lassiter, a well-loved patron and member of the Houston art community, died earlier this week after suffering a fall. He was 86. He was preceded in death by his partner, Edward Mayo, who served as the MFAH’s registrar emeritus.

After moving to Houston with his mother and stepfather in the mid 1940s, Mr. Lassiter eventually found his way to the city’s art community of museums and galleries. While working as a salesman at the Norton Ditto men’s clothing store in downtown Houston, Mr. Lassiter became known as a patron who managed to collect some of the city’s best artists on a modest income: according to the Houston Chronicle, his collection amounts to more than 500 objects. Some of these works are pieces that Mr. Lassiter acquired by artists who were just starting out in their careers, including early works by David Aylsworth and Julian Schnabel. Mr. Lassiter’s collection, according to his attorney Jim Avant, is to be donated to the Menil Collection. Works not accepted by the museum will be sold to benefit the University of St. Thomas.

Mr. Lassiter was also a collector of other types of art and decorative objects, including tramp art, mirrors, and ornamentations made by the Fornasetti company. His love of all types of art meant that his involvement in Houston’s art community went well beyond just patronage. After his retirement he spent his time volunteering at the Museum of Fine Arts, Houston, and was named the institution’s volunteer of the year in 2011.

In a 2006 interview with Sally Reynolds, for her book Houston Reflections: Art in the City, 1950s, 60s, and 70s, Mr. Lassiter commented on how Houston had changed since he first became involved in the city’s art scene:

“You ran into the same people at museum openings and at gallery openings, and there was an intimacy that doesn’t exist now because things have changed so and gotten so much bigger. There are so many more galleries, so many more openings. You know the city of course has gotten so big. There’s just a whole new world of people—there’s lots and lots of interest in young people—and they’re going to museum openings…the gallery openings…and they’re buying art and that’s all well and good. But things have really changed. When I first came to Houston it was a very small city and the feeling was small. It was more laid back—just a lot simpler, it seemed to me.”

“Bill Lassiter was among the first people to make me feel truly welcome in Houston some 35 years ago. I met him through his partner, Edward Mayo, and together they were at every opening, always encouraging new talent and unstinting in their loyalty. On his own Bill was an astute collector, his eye unerring, and over the years his Montrose home became a true Cabinet of Wonders, with works that ranged from tramp art to the freshest statements coming out of this city’s studios. What many people may not know was his unflagging work ethic. After retiring from Norton Ditto, he volunteered at the MFAH, working in our registrar’s office to keep our research files current and accurate. For the whole Museum family and the city at large, he was a constant presence and the very best of friends. And when he told you your show was good, it was the most wonderful compliment in the world.”

“Bill Lassiter was curious about art and especially the artists’ lives that inspired the art. He was one of our first Houston visitors to Loft-on-Strand on Galveston Island. We became fast friends. His circle of friends ranged from young artists to museum level artists and curators. His home and art collection exhibited his joy in living and his sardonic sense of humor.”

The artist David Aylsworth reflected on his long relationship with Mr. Lassiter, both as a collector and as a friend:

“It seems that I was far from the only artist that Bill purchased their first sold artworks from. He liked young and new art; he loved getting to know new artists; he liked buying art; and he liked buying art he could afford. I think it is safe to say that he rarely would pay that much for any single work of art, and very little of the art in his collection has escalated in any great value. But the way that he puts art together in his house was spectacular, personal, thoughtful, and always perfect. Because he had so much of it, he had to rotate what was out twice a year. And it never got old going over to see a new installation.

I have never known anyone like Bill. Few people have made such an indelible mark on who I am. I know I will spend whatever time I have left on earth just trying my best to be the kind of man Bill would want to talk with. He has set the bar pretty high in terms of being a role model. He was a super friend, and I loved him very deeply, as I know so many others did as well.”

“My thought is that I will miss the pat on my arm while pulling me close to ask ‘How are you, dear?’ and his tender translucent skin. I will miss his impeccable taste and style. And the way he loved sharing both.”

“For many of the artists that I know in Houston, finding out that Bill Lassiter acquired one of your works was a milestone. His collection (like himself) was idiosyncratic and varied. For the longest time I imagined that he was a twin, because I would see him at so many different art events in succession. But no – there was, and could only be, one “divine” Bill.” (divine is the word I loved hearing him say, and strongly associate with him).”

Funeral services for Mr. Lassiter are scheduled for 2pm on February 18, 2019 at Holy Rosary Catholic Church (3617 Milam). A reception will follow at Carter Bradshaw Funeral Home.

Pretty much one of the greatest dudes in Houston. I will miss you Bill!

When I lived in Houston I saw Bill at so many exhibition receptions and when I saw him at parties he was usually drinking gin gimlets. When we talked during those times he made you feel like there was no one else in the room. Now that room is a bit emptier.

When my daughter was little, she loved the movie Hairspray,, and we went to see it several times. After Divine died, my daughter asked if the parts of the movie where he appeared would be blank, and now with Bill passing I wonder if the spot that he occupied in our world for so many, many years, will be a deep void, impossible for another pair of shoes to ever fill. He will be sorely missed by many.

Bill Lassiter also included me in his life when I returned to Houston. I shall miss his delicious suppers, the very best gin and tonic ever and his voice asking me for help in gathering his special treats for his annual Christmas gathering. He was a wonderful friend. Mary Jane Victor

Bill Lassiter was a good friend and a true gentleman. Gimlets and dinner at Bill’s house were always an experience. He will be missed.

I feel such a loss….Lassiter was such a gentleman. He was also a bon vivant and great party-goer and party maker. I was always so happy to see him at any and every event…and he went to them ALL. I will miss him so very much. No words really to describe how kind, generous, and truly authentic a person. Houston art scene benefited greatly from his support and enthusiasm. A hero of mine.

His style and sense of fashion, in all seasons, his dinner table ambiance and conversations and culinary delights, his strong support of the Houston Art Community, its artists, institutions and patrons, his jovial and sardonic remarks, his Christmas parties and Gimlets and generous hospitality and flair, will give us pause as The Season rolls around minus the snug, shoulder to shoulder comfort of his charming, art-filled home and the fellowship he fostered among us. Such a lovable, lovely man.