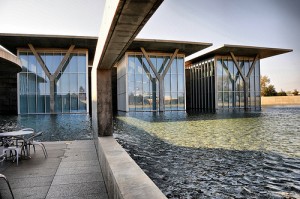 The Fort Worth Modern is celebrating ten years in its fancy Tadao Ando building by acquiring some big, fancy new art: Wall Drawing #50A, 1970, by Sol Lewitt consists of hundreds of hand-drawn lines in colored pencil (red, yellow, and blue) stretching across a large wall, overlapping each other, and measuring approximately 11×16 feet; a Dan Flavin light sculpture, Untitled (for you Leo, in long respect and affection) 4, 1978; and Kingdom Day, 2010, by Mark Bradford consists of four 10×10 canvasses; and a 14 foot wide Robyn O’Neil drawing titled These Final Hours Embrace At Last; This Is Our Ending, This Is Our Past, from 2007. Other acquisitions include another Howard Hodgkin, and a  new video and sound installation by Bruce Nauman (b. 1941) and a Jenny Holzer installation  which will be unveiled at the December 6 gala, featuring her famous truisms including MONEY CREATES TASTE.