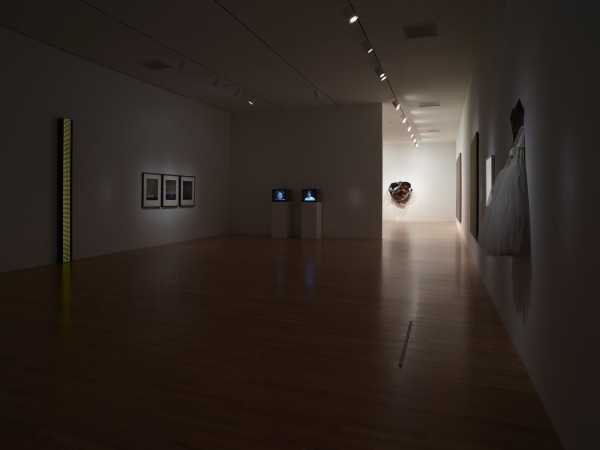 Squint and you can see it in the near background: Bruce Nauman, Good Boy Bad Boy, 1985, video

Absurdity in art is tricky; political and social absurdities are easy enough to communicate via painting or drawing or illustration (often with text), but full-bodied absurdity really takes off through video.

The delivery of absurdity has always been well served by the moving image, all the way back to Chaplin and Keaton in silent film, and even today television and web-based comedy gives us some of the most sublime absurdity available. I suppose my underlying thought is that absurdity itself, pushed to its limit (and what it is about if not extremes?), can qualify as art even outside of art-world convention, because true absurdity is abstract in its lack of care for realism or reality—it’s related to surrealism, after all—and it also usually needs layers of context to fully grasp.

The best examples of it usually have a tight focus and a limited kind of delivery; confidence in the premise lends economy (the British are very good at this type of humor) so on the surface it seems elementary, but I can’t think of a more sophisticated sensibility than true comic absurdity.

Because if this, one rarely stumbles across it in mainstream media because it’s too weird, spiky, and hard to explain. And like most art that relies on sensibility and acquired taste, a viewer either gets it or doesn’t. It’s too risky for primetime. It’s also often a little dark.

But I have a serious thing for it. As someone quite addicted to Funny or Die and the Fast Show and Mr. Show and of course Monty Python and four decades of SNL and goes looking for this type of thing all the time, I’m always happy to see a bonafide artist hit that sweet spot on video and even happier to see it in a museum or gallery or institution.

I’m thinking about all this right now, mid-summer, because the other morning as I was wandering around the DMA after a press event, waiting out a freakish torrential rainstorm, I came upon Bruce Nauman’s 1985 video piece “Good Boy Bad Boy.” I still like Nauman’s version of absurdity, though it hasn’t been talked about in a long time it seems, and at first I wasn’t even going to slow down. But the two featured actors’ voices coming from the TV monitors were compelling enough to make me stop to watch for a while, and it still strikes me as a great mix of frightening and funny.

I know at one point I started to laugh, and this made two museum guards on opposite sides of the room stroll closer and laugh along with me for a minute, and I stopped worrying about whether they get sick of listening to the Nauman banter all day, every day: “I like to shit. You like to shit. We like to shit. This is shit,” and, “I am an evil woman. You are an evil woman. We are evil women. This is evil.” Etc. The looped piece lasts about an hour; I believe there are about 100 passages within.

This video isn’t as goofy-funny as it is darkly absurd, and my laughing felt involuntary in the moment, the way one laughs nervously during confrontation or slasher flicks or roller coasters. The script is repetitive and intentionally ugly. The delivery by the scowling woman on one screen and the mellower man on the other feels dated in the best possible way in 2014; to my ears it was like watching a good old Sidney Lumet movie with the slightly cold, formal annunciation of ‘70s acting, and then I realized that even though this video is younger, it builds a similar tension as Peter Finch does in 1976’s “Network,” yelling out his famous “mad as hell” screed. But without a framing narrative, the Nauman words eventually go totally surreal. Nauman’s video is about how language and its delivery can quickly morph into nonsense, and while inflection informs impact, mindless repetition and inundation can kill it.

But I think it’s rare for a viewer to laugh, with cause, in a museum while looking at art that might or might not to inspire that reaction, and rarer still for that to be contagious. For me as an early and idle museum visitor in mid-July in Dallas, it was an unexpected moment of genuine admiration for a solid piece of absurdist video art.

“Good Boy Bad Boy” appears in the DMA exhibition The Museum is History, in the Hoffman Galleries, through Nov. 16.

In the early 1980″s, I tried using absurdity humor in the dialogue of my ROBOTT™ performances. It seem to only elicit hostility or total misunderstanding. Must be why I could never do cartoons for the New Yorker. Nauman certainly did it with more bite.