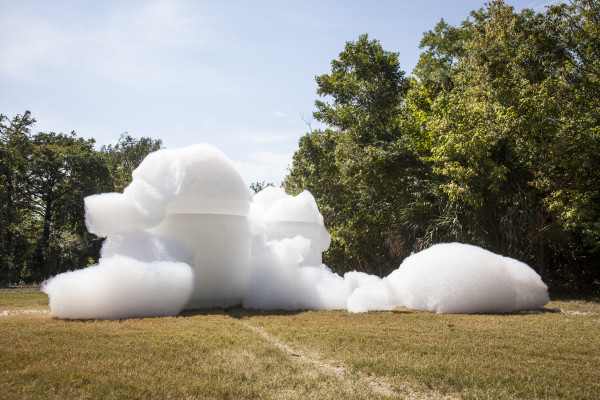 Strange Pilgrims, a group show spread across three major venues in Austin, is, despite its unevenness, a curatorial success. It’s obvious that a lot of hard work went into staging this much-promoted show, and limiting the amount of artwork (28 pieces) and spreading them across locations around Austin shows attentiveness and dedication to the artworks that the Contemporary Austin’s curator Heather Pesanti and her colleagues deserve congratulations for.

And the literal pilgrimage it takes to see all of the work in the show is worth pointing out. Demanding travel from the Contemporary Austin’s Jones Center to Laguna Gloria to the Visual Arts Center at UT creates the risk that viewers won’t see the exhibition in total. But the limited amount of works kept me, at least, engaged. The refined selection should be made an example of moderation.

The exhibition is meant to center on a handful of themes: environment, place, technology, information, performance, and process—all of those kinds of too-broad-to-exclude-much words. But the pieces do fit, and for the most part point directly to one of the aforementioned nouns. The show’s promotional materials point to the “experiential.” So what exactly is meant by experiential? First let’s look at the work. 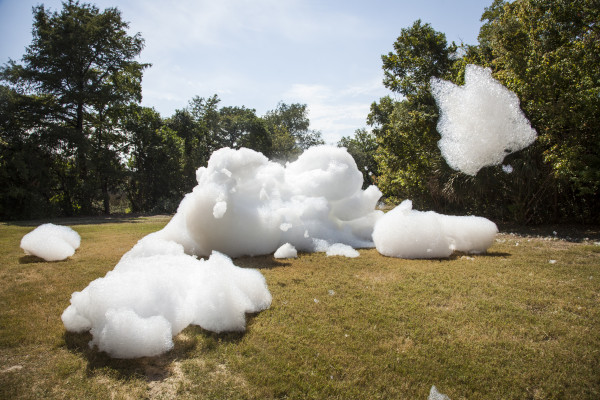 Roger Hiorns, A retrospective view of the pathway, 2008–2015. Foam, compressor, and polyester
tanks.

Highlights at Laguna Gloria include Roger Hiorns’s A retrospective view of the pathway, and it’s the hub of the exhibition. Huge vats billow clouds of white foam onto the ground in a clearing on the wooded campus. Unfortunately, there are logistical constraints, and the piece only runs at set times throughout the week—so plan accordingly. The setup is simple, but the approach–the walk out to the farthest point of the campus, passing newly installed sculptures, and emerging from the live oaks and poison ivy–gives this piece some weight. It doesn’t demand too much of the viewer, and you can interact with it or not. You don’t even have to look at it; you can hear and feel it instead. 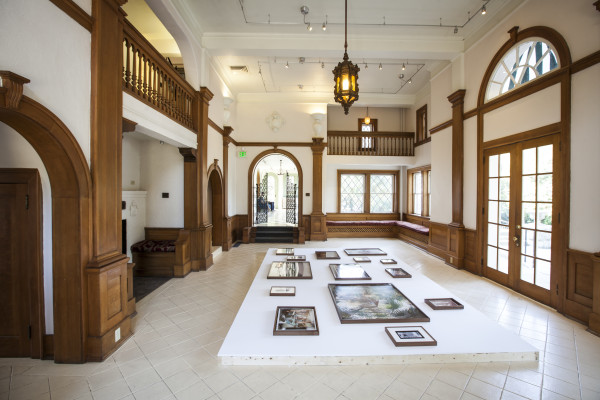 The Austin-based collective Lakes Were Rivers make special use of the interior of Laguna’s historic Driscoll Villa building. Exploiting an archive of photographs and found material on Laguna Gloria itself, Swan Cycle is presented as an intelligent solution to the building’s limitations as an exhibition venue. The collective’s installation cleanly contextualizes the space. 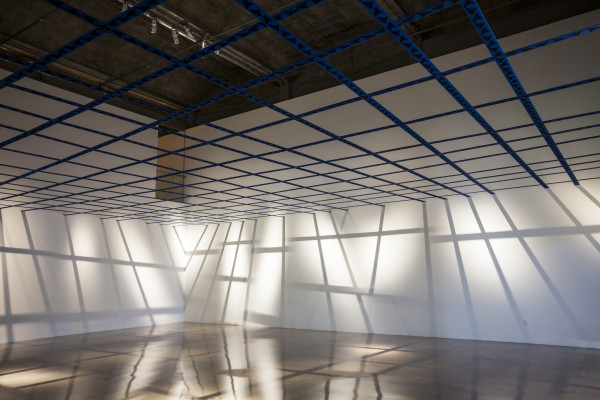 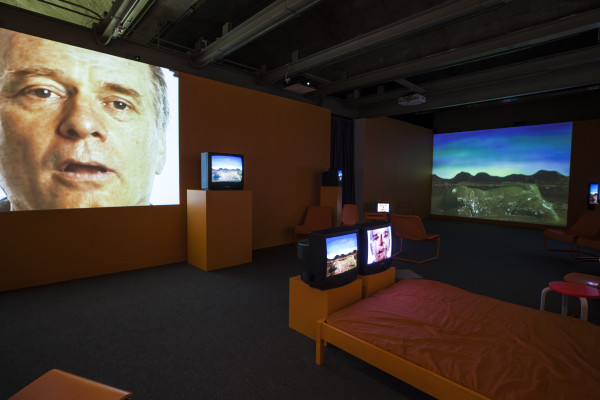 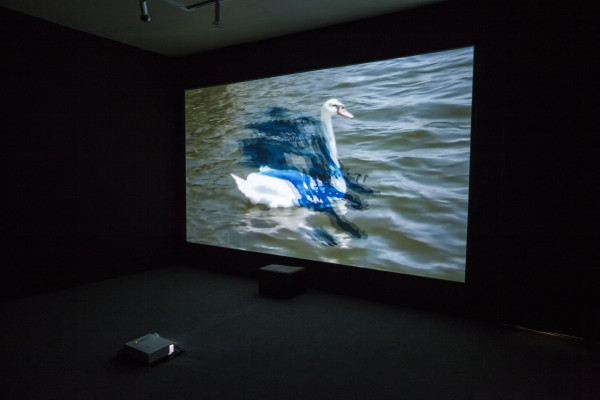 And Trisha Baga’s “everything-in-the-studio” installation is okay. I commend the use of 3-D projection, but not without pointing out that it seems gimmicky; in this case I doubt Baga’s sincere embrace of the potential of the technology. Sofia Taboas’ Floral Beginning in Circular Time is hard-edged—even formal—but still somehow warm. Her repetition of shape in various industrial materials looks like a fabricator’s field day. Documentation video of Yoko Ono’s Cut Piece (1964/2010) historically anchor the performative theme of the show, but seems a bit gratuitous given the strength of the other works. 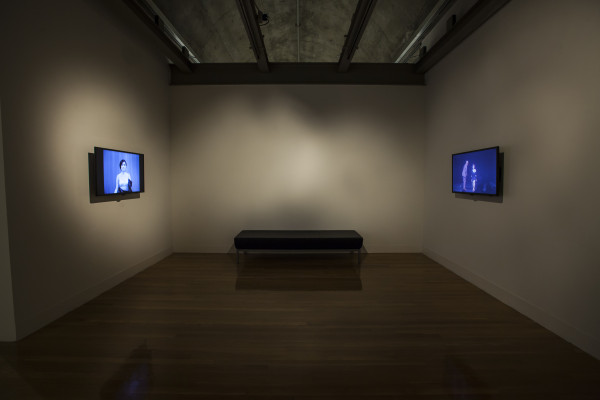 At the Jones Center downtown, I enjoyed Andy Coolquitt’s ruins of Minimalism—specifically because they escape easy identity within the show’s proposed themes. Millie Chen’s video Tour—of tracking views through tall grasses to and from what we are told are sites of historical atrocities—is an admirable attempt to visually anchor the sites as real, physical places. And from 1970 is Bruce Nauman’s Green Light Corridor. Who doesn’t love a Nauman constricting environment? It makes for a great experience.

One of the most robust recent explorations on the experiential concept comes from Dorothea von Hantelmann in an 2014 essay titled The Experiential Turn. Acknowledging the pitfalls of coining a trendy catchall term, von Hantelmann points out:

Every artwork produces some kind of (aesthetic) experience. But as I would like to argue, from the 1960s onward, the creation and shaping of experiences have increasingly become an integral part of the artwork’s conception.

I agree. And it’s this goal of experience-shaping that interests me. I think this exhibition does, at least in part, push the recognition of this phenomenon to the forefront. It’s that attempt, and not the addressing of themes, that piques my interest.

I believe the experiential is less an attempt to name a new phase in art history and more an attempt to redefine specific conceptual tendencies in art we have been dumping into the disparate bins of Conceptual, social practice, or performance art. I consider ‘experience’ as one of several approaches, not merely an aesthetic response to a situation.

The most successful examples of this are works that: present themselves as platforms for interaction, are limited in constraints, are unclear about their intentions, give up control—and most importantly—those in which the ‘art’ is situational. All of these factors rely on contingency of the art object to avoid falling into the banality of the everyday. I should point out that this approach is a slippery slope and could easily be used to justify some outrageous spectacles and half-baked stunts.

Luckily, Strange Pilgrims errs on the side of caution. David Joselit, in his book After Art, points to the experiential in economic terms laid out by Gilmore and Pine in The Experience Economy. Here, experience appears on the economic “ladder,” a step above services and just below transformations. Experiences are defined as “memorable events that engage individuals in an inherently personal way” [emphasis mine]. From this economic standpoint, any museum or gallery visit could be considered an experience, but here the emphasis is on events rather than products.

I’m not distinguishing a hierarchy in describing Strange Pilgrims. I want to point this out as a basis for critique of the approach. And as a reminder that to experience art in the everyday requires a willful suspension of disbelief about that experience.

Strange Pilgrims runs through Jan. 24. There’s a symposium on the exhibition on Nov. 14. Photos courtesy The Contemporary Austin.