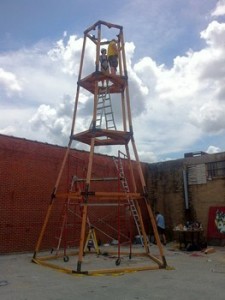 Culturemap Austin has an update on a prominent crew of Texas participants in this years Burning Man Festival in Nevada. Lead artist Troy Stanley, his fiancée Amberry Jam, and crew are making progress on Singularity Transmissions, a Tower-of-Babel-like communal sound womb, having added $9494 from Kickstarter to the $15,000 grant given the project by the Burning Man Organization. Components for the massive temporary artwork are being created at Winter St Studios, and trial fitted at Box 13 Studios in Houston, for later shipment to the festival for one-time use and  subsequent destruction by fire.

Rachelle Vasquez at Box 13: Those That Feel...

Singularity Transmission: Tower of Babel to be Rebuilt...