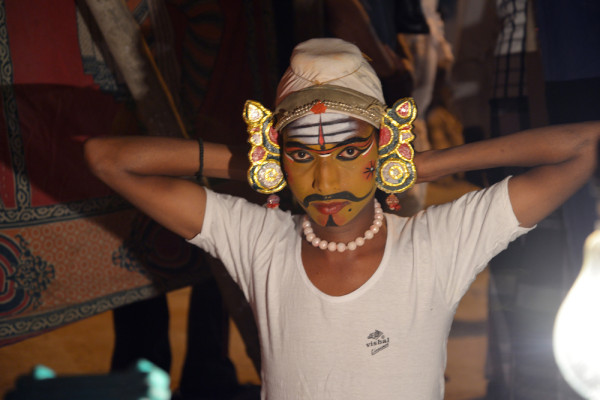 Thomas Riccio has taught theater and directed performances all over the world. He creates fascinating mash-ups out of indigenous ceremonies and images of accelerated commercial society. 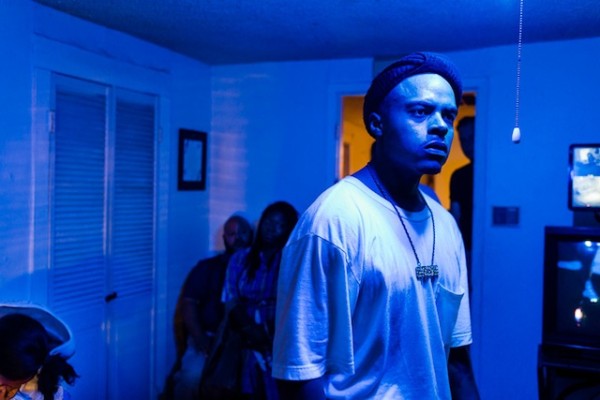 As shot-caller for the Dallas-based arts group Dead White Zombies, Riccio puts the pedagogy of mythology and anthropology right on the line of Dallas culture, blending the politics, pastimes and social structures of the city with the cosmology of classical paganism (Homer, Virgil, Ovid) and a variety of shamanistic traditions, both ancient and contemporary.

The Zombies performance titled T.N.B. was staged in a former drug stash house in West Dallas. Thug life, in this piece, was treated as a point of mystery where forces of empathy and evil performed their cosmic dance. The show was, by turns, shocking, mysterious, and beautiful. I was totally amazed by it. The Zombies followed up with Bull Game–not as brilliant as T.N.B. but still bold and intelligent. Bull Game linked the contagious quality of anger, the prodigious enthusiasm of Dallas sports fans, and polytheistic rites of sacrifice and fecundity. 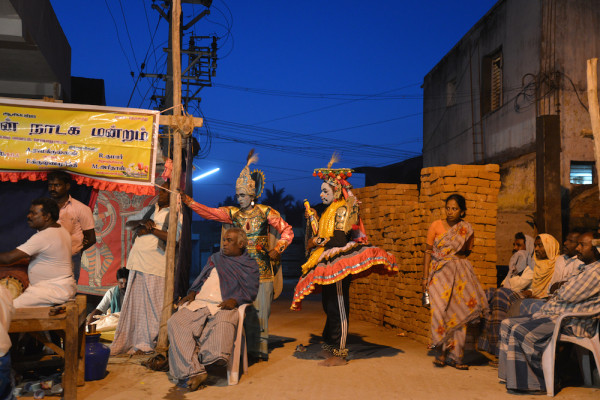 Riccio’s video for Open Archive shows shaman, traditional singers and dancers, and unfinished situations in the daily lives of indigenous people. There is no voiceover and very little text to demarcate places and practices. The video features performance clips from Nepal, China, Zambia, Alaska, Ethiopia, India, and other places. A clip from a singing competition in South Africa reminded me how much Rock ‘n’ Roll performance, especially in its early years, owes to African/African American folk theater and spirituals.

Watching Riccio’s video is less like looking at ethnographic field data and more like watching a global psychodrama. Psychodrama is a therapeutic method developed by Jacob L. Moreno, who felt , as Jeremy Rifkin mentions in his book The Empathic Civilization, “that the nature of human beings is to be creative and that living a creative life is key to human health and well-being.” Moreno believed that creativity is rarely a solitary process, but rather something that is brought out by social intercourse. Rifkin says the chief mechanism in Moreno’s work is empathy: “It is by imagining and experiencing the feelings and thoughts of others as if they were one’s own that one unleashes personal creativity.” Not creativity as “whimsy” or “free-spiritedness,” but creativity as behavior that shuttles to “the very core of what it means to be a fully aware and responsible human being.”  Riccio’s video does not project a strong sense of religious feeling. Instead, one sees a rich variety of theatrical performance–people emulating the virtues of past traditions in order to lengthen their culture and come together over desires for bad fortune to go away and good fortune to linger. 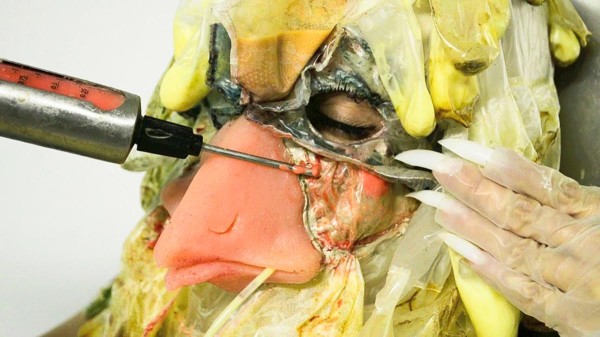 Jessica Pizaña Roberts‘ video The Appointment features a wonderfully inventive character; she is the cross-fertilization of a society woman and a chicken. We watch her undergo a strange dermatology procedure, in which clear sacks mixed within the feathers on her face get filled plump with colorful food pastes. The atmosphere is eerily clinical. The procedure is fascinating. The costume is fantastic.

In folklore, chickens symbolize something in need of shelter and protection. They can often be taken as foolish. Roberts’ hen is the type of woman who wears up-to-the-minute shoes and accessories, no matter how outrageous their appearance. Her procedure is one of rejuvenation, but it is totally cosmetic. There is nothing spiritual about the hen’s new vigor. Her attitude at the end of the video suggests not empowerment, but rather zeal to attract a mate who can protect her, financially. 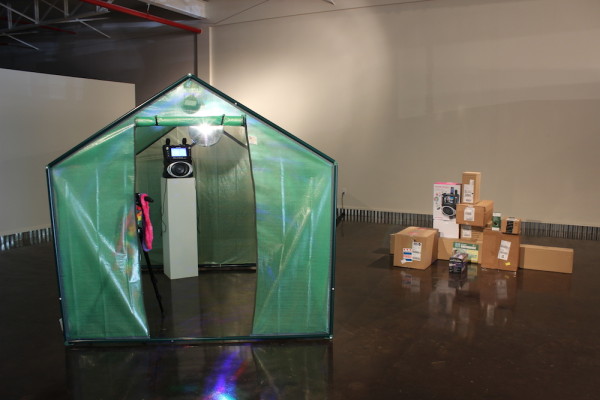 Karaoke Hut, v2.0 by Mat Kubo is a green house assembled from a kit purchased at a retail chain’s lawn department. The interior is rigged with consumer-grade theatrical lighting and an off-the-shelf karaoke machine. All the commercial packaging of this piece is set up as a sculpture beside the hut. There is also a posted song list. All are reliable Rock’n’Roll sing-alongs; the titles familiar as hymns . . . probably more familiar.

On my visit, the hut was empty. But it isn’t hard to visualize what it would look like activated: someone fixed by the frame of the doorway and set dazzling by the light off the mirror ball, going to town, vocally, for her audience with a Billy Joel standard. For all the name branding that is present, the hut still manages to evoke a sense of communal piety, a hint of ceremony like something pictured in Riccio’s video.  For someone like me, a non-singer who only occasionally ribbits with the radio in private, the emptiness of it had me feeling like I was looking at a relic, a once vivid place of celebration whose authority had gone dry. I think this haunted feeling is Kubo’s main object. The point being, that without some sense of religious feeling—charged situations of raising our voices together and unifying our gestures—we shrink, and the reduction is brutal. 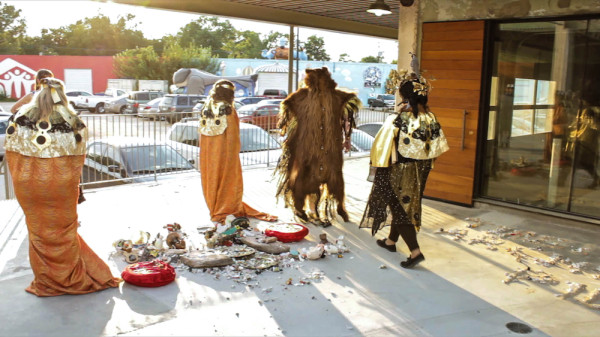 Captain Dirty Bear and His Dirty Cub Cadets Contemplate the Impossibility of Permanence in the Physical World is video documentation of a live performance by Anthony Sonnenberg at Big Medium in Austin, a performance that was part of the Texas Biennial in 2013. Sonnenberg is a folkloric size and utterly watchable in his bear skin rig. I liked the character and his loyal helpers immediately. The captain and his cadets are so sincere in gaze and gesture that it is the audience, loosely milling around in summer clothes, that seems like the wacky addition rather than the craft store goods that anoint the costumes and souvenir trinkets that play part in the ceremony. 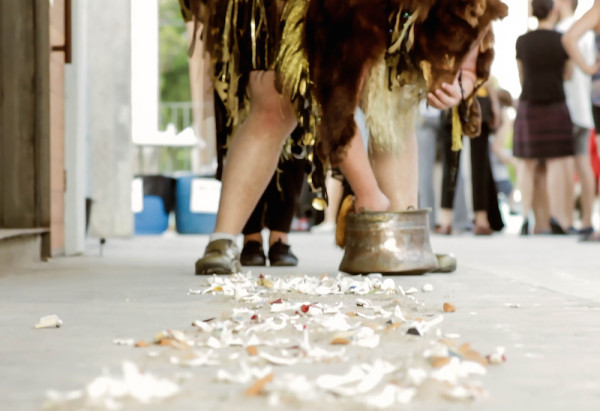 Along the walkway outside Big Medium, Captain Dirty Bear smashes the trinkets and puts them in a metal vessel filled with sand. Moving as though guided by a vision, the Captain carries the vessel to another part of the walkway where he scoops out portions and pours them into letter shapes on the ground. Eventually he spells out the following text: “Time itself grows old. Pyramids, arches and obelisks are melting pillars of snow.”

The line is taken from W.G. Sebald‘s book The Rings of Saturn. Sonnenberg’s omission of quotation marks and lack of attribution to the source material is a move out of Sebald’s own playbook. In fact, the line is a blend of Sebald’s language and that of Thomas Browne, whose book on sepulchral urns Sebald or his persona has been contemplating.

The text is where the artist makes a critical error. As interesting as Captain Dirty Bear is, his project does not live up to the standard of the Sebald/Browne voice, nor Sebald’s complex imagination.  It is not that I think Sebald’s work is too precious to sample. Sonnenberg doesn’t even try to weave his own utterance or gesture into the blend Sebald has made with Browne. The text shines with an invitation to mystery brighter than any other gesture in the performance. 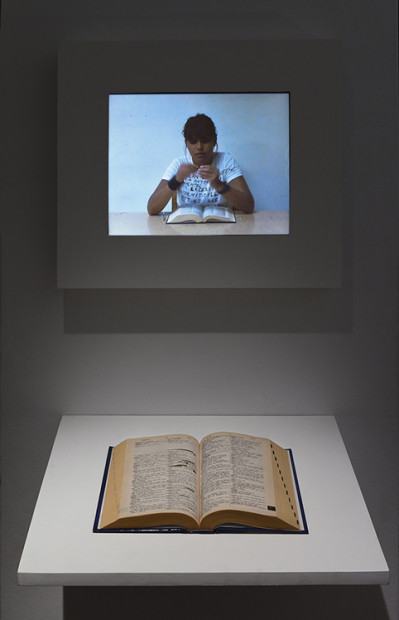 Paula Gaetano Adi’s Object continues the shamanistic theme of the exhibition, this time employing the aspect of the trickster.  Object is a dictionary in which Gaetano Adi has precisely cut out select definitions, so that the subject word shows the definition of another word a page or several pages below it. Upsetting the traditions of the people that they may discover new virtues within them is the trickster’s role. 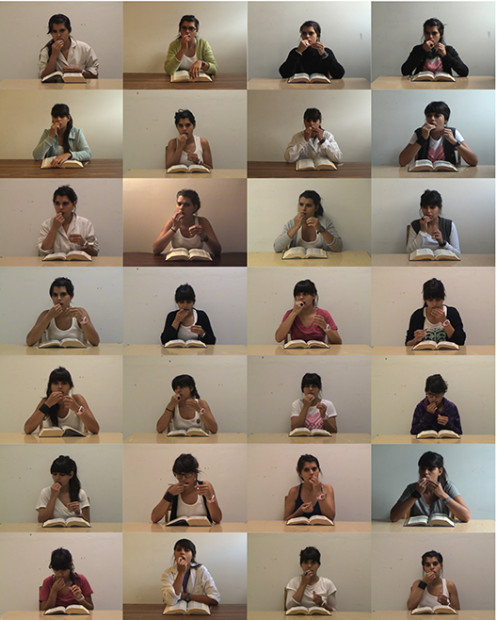 Adi’s performance video that accompanies Object in the exhibition (but not in its purchase price) shows the artist swallowing each definition she has removed. Making food of objects that are not food is one way a shaman shows her bravery for the people, showing them how not to fear change; that traditions are applicable to every kind of human setting. By swallowing definitions, Adi transforms the scientific quality of cataloged language into a profoundly intimate autobiography. She manages a line of inquiry into traditions, text, and personal creativity Sonnenberg doesn’t quite get to. But she leaves the trail when it comes to price. Object is priced thousands of dollars higher than the next most expensive artwork in the program. It is a beat off the pulse of communal feeling that the other artists have marshaled with the prices of their work.