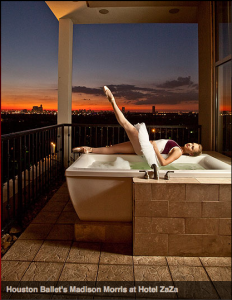 The Houston Convention and Visitors bureau is trying a bit of marketing jujitsu: instead of bemoaning the Hotel Occupancy Tax that slaps an added 7% onto your bill, they have launched a new campaign to highlight the fact that HOT money is going to support local arts, casting every hotel guest as an arts patron!  The campaign, whose tag line is “Check in. Support the arts” features local performing artists photographed at Houston hotels in bizarre, sometimes funny juxtapositions. The Houston Chronicle has quickly chimed in with an editorial praising the effort.

Although it focuses on sweet-smelling, well-groomed performers, and sweeps those scruffy, troublesome visual artists under the hotel carpet, the campaign is still a radical contrast to Wayne Docefino’s 2008 TV takedown of Houston Arts Alliance Hotel Tax funding.

Houston Artists: Today’s the Day to Learn How...