Just this past August, it looked like Houston would have no Thanksgiving Day Parade for the first time in over six decades. But the city, some new corporate sponsorship, a bunch of artists, skateboarders and Tommy Tune are going to make it all happen.

The Thanksgiving Day Parade has been an annual Houston holiday event since 1949 when Santa arrived at Union Station and rode his sleigh to the downtown Foley’s. Foley’s was the original parade sponsor until the store was bought by Macy’s in 2005. The Houston Festival Foundation (HFF) has organized the event since 1995, but announced in early August that they had been losing money for years and were pulling out. Even if someone were willing to take over, it turned out that HFF had already posted the major floats for sale online and the city of Hidalgo bought five, including the big turkey and Santa’s sleigh, for $30,000. The parade would have to be scratched. Or start from scratch. 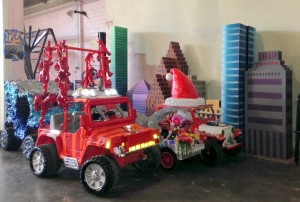 With only a few months until the holiday, the Mayor’s Office of Special Events scrambled. They took over the parade, got H-E-B as a sponsor, hired a New Orleans company that makes floats for Mardi Gras, and got Broadway legend and former Houstonian Tommy Tune to serve as the parade’s grand marshall.

Someone also talked Diane Barber (independent curator and, until recently, long-time co-director/visual arts curator of DiverseWorks) into organizing a group of artist-made floats commissioned by the Houston Arts Alliance and the Mayor’s Office of Special Events. “I think this may very well be the start of a new tradition,” says Barber, “and I certainly think it makes sense to use this event to showcase the wealth of creative talent Houston possesses.”

There are eleven local artists who have made cool, miniature art cars for the “Art Car Capital of the World” parade float, bound to be a new favorite among families who have yet to check out the annual springtime Art Car Parade. But the wackiest float planned may be “H-Town Bounty,” designed by Patrick Renner, Alex Larsen and Eric Todd. The float will feature a giant cornucopia that also functions as a skateboarding half-pipe on which professional skateboarders, dressed as giant vegetables, will perform simple tricks during the parade. In the front of the cornucopia, there will be an open-air DJ booth where “DJ Gobbles,” dressed in a giant turkey costume, will play music. Driving the float will be artist Patrick Renner, dressed a giant fork. 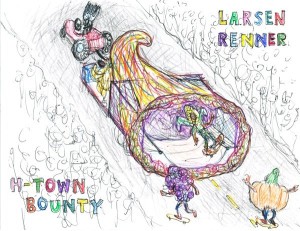 Parades for Thanksgiving Day and Beyond

Oh, cornucopia…thank you for that. I needed that clarification. When I glanced at the sketch, for a moment I thought they were building a giant condom and dragging it down the street and calling it the “H-town Bounty.”

Skateboards, DJs and Art need to be separate.

Most of the time I would agree, but the mass public is dumb and they like simple visual stimulation.