by Beth Secor May 27, 2010
FacebookTwitterEmail 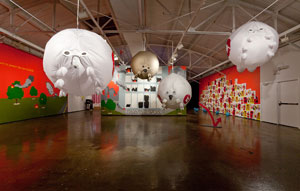 The great skill of The Yes Men,
the political activist artist duo of Mike Bonanno and Andy Bichlbaum, lies in
their capacity to deceive the deceivers
by mimicking their dress, their speech and their marketing methods. For those
of you not familiar with the work of these two pranksters, The Yes
Men are known for their highly visible jabs
at those politicians and corporations, who in the pursuit of power wreak havoc
upon anyone in their path. The Yes Men’s first solo show, Keep It
Slick: Infiltrating Capitalism with The Yes Men, is currently on view at DiverseWorks Art Space. The traveling
exhibition was curated by Astria
Suparak and organized by the Miller Gallery at Carnegie Melon University and
Feldman Gallery at Pacific Northwest College of Art.

Through a process known as
“Identity Correction,” The Yes Men expose
“those in charge” for who they are and for who they could be. At conferences
and on TV, Bonanno and Bichlbaum convincingly pose as corporate/official
spokesmen for powerful entities like the World Trade Organization, Dow
Chemical, Halliburton, McDonalds and HUD as well as the countries of Canada,
France and England. Their work includes fake corporate websites, press
releases, newspapers, PowerPoints, props, posters and videos.

As word of warning, if you are
one of those types who rush through exhibits, perhaps this isn’t the show for
you, as it demands much of the viewer. Even though I took my time throughout, I
didn’t fully grasp all the references to specific Yes Men actions and interventions until I did additional
research on my own.

The exhibition opens with an
installation containing fake newspapers, a collection of fictitious corporate
nametags, a computer screen opened to The Yes Lab for Creative Activism webpage and television
screens displaying actual media reportage on The Yes Men’s work.
During the past decade, The Yes Men have
been quite successful in garnering media attention, with some reporters aware
that a hoax had been played while others became part and parcel of the prank.
For example, in 2002, The Yes Men established
a fake website, DowEthics.com. In 2004, the BBC discovered the website and the
hoodwinked news organization contacted “Dow” and requested an interview to
“discuss the company’s position on the 1984 Bhopal Tragedy.” (By way of
background, Dow Chemical acquired Union Carbide in 2001. Union Carbide was
responsible for a major chemical leak in 1984 that killed and sickened
thousands of Indian workers. The site has yet to be cleaned up, and has
resulted in high numbers of birth defects, cancer and other diseases for
survivors and area residents.) 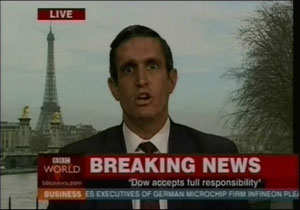 Still of Dow spokesman Jude Finisterra on the BBC

Disguised as Jude (saint of the
impossible) Finisterra (end of the earth), Andy Bichlbaum announced to the BBC
reporter and the world that Dow would now right the wrongs of Bhopal by
liquidating Union Carbide, cleaning the Bhopal site and duly compensating the
Bhopal victims. The news quickly spread around the globe, immediately resulting
in the loss of two billion dollars in Dow stock on the German exchange. Two
hours later the embarrassed Dow Chemical proclaimed that Mr. Finisterra was not
a company representative, and as such, his statements did not reflect the
policies of Dow. Feeling the need to further clarify Dow’s remarks, The Yes Men
issued another press release supposedly produced by the
chemical giant, further embarrassing the company:

Included among its many
repudiations was the following statement:

Dow shareholders will see NO
losses, because Dow’s policy towards Bhopal HAS NOT CHANGED. Much as we at Dow
may care, as human beings, about the victims of the Bhopal catastrophe, we must
reiterate that Dow’s sole and unique responsibility is to its shareholders, and
Dow CANNOT do anything that goes against its bottom line unless forced to by
law.

(A few months later Andy again
appeared on U.K. television when he pretended to be a Dow spokesman at a London
Banker’s Conference. He stated that it was ok for a company to have skeletons
in their closet as long as those skeletons were golden, and was greeted with a
round of applause.)

The main gallery of DiverseWorks
includes additional installations, a video viewing room and a corporate
boardroom. The largest installation consists of props, murals and PowerPoint
presentations that illustrate an elaborate stunt performed by the artists at
the 2006 Florida-based Catastrophic Risk Conference for insurance
professionals. Speaking to a room full of attentive corporate management types,
Bichlbaum posed as Fred Wolf, a Halliburton representative, while Bonanno
assumed the guise of Dr. Northrup Goody, Head of Halliburton’s Emergency
Products Development Unit. Together they delivered an increasingly ridiculous
talk extolling the benefits and functionality of a device known as the SurvivaBall. 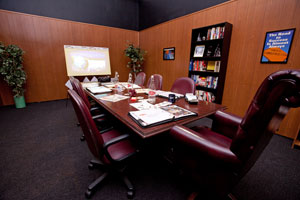 According to the two speakers,
the SurvivaBall, which strongly
resembles a giant inflatable bedbug, was “designed to protect managers from
natural disasters and cultural disturbances of any intensity or duration.” In
other words, in the event of a nuclear or environmental disaster, those in
positions of responsibility will survive. During the Q&A portion of the
program, nary a soul questioned whether or not this was a joke or wondered what
would happen to those too poor to afford such a suit. Instead, the conference
attendees were more concerned with the product’s cost and comfort, or that the
device might fall into the hands of terrorists, allowing them to survive
chemical, biological and radiation attacks. (Among other videos, you can view
the SurvivaBall Model X7 advertisement and a documentation of the conference in the Keep It Slick video viewing room.)

With the intention of watching
only a few of the videos, I ended up watching all of them at least once, and
some of them twice. Although every video was great, my favorites were Up
Came Oil, an animated musical number with
an overwhelming number of ejaculation references, and Vivoleum and a
Tribute to Reggie The Exxon Manager. I will
not give too much of this one away but it involves votive candles made from the
flesh of Reggie.

Beyond the exhibition itself lies
the question of whether or not The Yes Men are politically effective. The work they do is important. They strive to inspire
others to action through The Yes Lab for Creative Change. Their broad media and Internet presence helps make
the public more aware of and less complacent about the actions of corporate and
political “evil doers.” Their public acts do, in some cases, cause very real
humiliation to the political and corporate kingpins of the world.

But this is where The Yes
Men’s ability to change the world is
stymied. In an ideal world, all actions would come from a place of compassion,
and when mistakes were made, those who committed them would accept responsibly.
But this is not an ideal world, as we are all so painfully aware. For the most
part, The Yes Men’s ability to embarrass “upper management” has little lasting
affect, as those in power have no capacity for shame, and no desire to consider
the public good, unless it is somehow reflected in the bottom line. And we are
equally complicit, as more often than not our rage fades away, displaced by a
desire for comfort and ease. Until more of us speak out and take sustained
action against corporate and political outrages, the effect of The Yes Men’s
actions will be short-lived.

Beth Secor is an artist and a writer who hopes she is
a lot nicer to people than her evil typing fingers are.

The Ten List: The Ins and Outs of Openings

The Yes Men are the frigging best. I love them.