Recontextualizing the Gallery Space: A Talk with DiverseWorks’ Ashley DeHoyos

Artists Rabéa Ballin and Joshua Rios at work in The Studio, DiverseWorks

Collective Presence, an evolving exhibition currently on view at DiverseWorks in Houston is described as “part exhibition, part curatorial concept, and part experiment.” It presents a program of micro artist residencies and public/community events inspired by ideas of land, territory, and decolonization in the Gulf Coast and Caribbean regions.

This week I sat down with Collective Presence curator Ashley DeHoyos of DiverseWorks, to chat about her curatorial inspiration and about how this exhibition functions as a mechanism for recontextualizing the gallery as a space for artistic presentation, and updates the conversation on what purpose galleries serve and who they operate for.

Theresa R. Escobedo: You’ve launched an ambitious program of activities for Collective Presence, and it seems that you’ve really departed from what is typical or traditional for a gallery presentation.

Ashley DeHoyos: Well, Xandra [Eden, of DiverseWorks] had the idea of hosting micro residencies in the gallery space, and was trying to figure out what that would look like and how we would actually do that. She had produced Lines Drawn, which was similar in program. Once I was hired, I realized that this idea was similar in format to a project called Cultural Platforms for Resistance that I did in D.C. (or right outside, in Rockville)… and in that I was playing with the use of space and what an exhibition could really be used for in terms of who can access the space and who we identify as artists. I’m really interested in two things — culture as a kind of medium to express ideas, and also really thinking through who the exhibition is for and questioning if there is a way to flip established roles and responsibilities in a weird way. 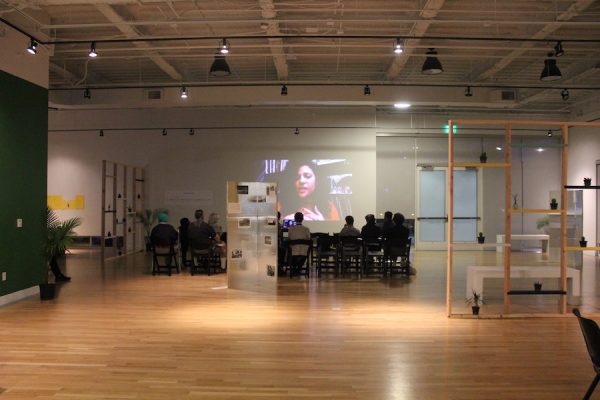 Cultural Platforms for Resistance featured a cohort of six artists who created anchor projects, and we developed public programming associated with those projects. The show was in September 2016, which was a very interesting political moment. We did create a kind of environment, but I had visions for that space that didn’t come to fruition, so I go back and forth about whether it was successful or not. When I got here, I thought: ‘Oh — I can use that formula for this and play with some of the things I didn’t get to play with there, but correct some of the things… .’

TE: That you learned from?

AD: … Right — from that experience.

TE: It’s fairly common to address how an artist’s personal experience influences his or her creative practice, and there’s an abundance of material and dialogue which considers that topic, but I think it’s interesting to consider how your curatorial perspective is creatively informed by your life.

AD: Well, I knew coming into this project that I have an interest in land and land politics and how that is also associated with cultural loss.

TE: Especially in this borderland context — for sure.

AD: Yes. I curated a show at Sam Houston State University called Journey to Aztlán: Contemporary Conversations with the Land, and that was an interesting process and conversation because I was curating that show as I was moving back [to Houston]. I was returning home and I was also looking at the land. I had been in Baltimore, which is a very concrete city, and came home where my family has an acre and a half of land, surrounded by rice fields, and that contrast is really interesting. Also, my family’s neighborhood in the next five years will experience drastic transition as Highway 99 expands. These conversations all fed into what I was thinking about as I was working through this show, so I knew already that land was an issue that is important to me. Then it became even more important to me to focus on the Gulf Coast as an art-producing region — I’m really interested in the kind of complexity that is within the Latinidad and the diaspora.

As someone who has grown up in Texas, who wasn’t taught Spanish — my family assimilated — sometimes I am reconciling what it means for me to be from Texas with its messy history: it was part of Mexico, then it wasn’t Mexico… . 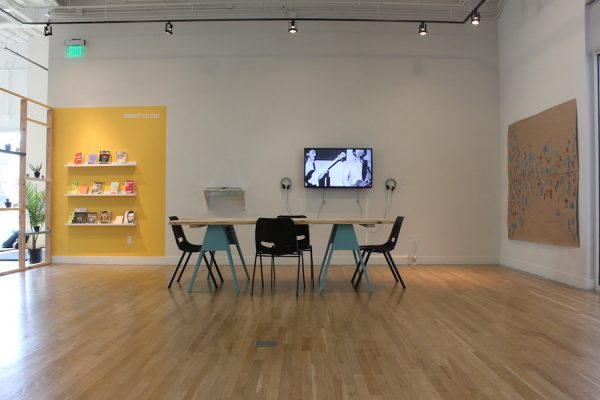 TE: Well, it seems like an authentic way of informing your own curatorial initiatives. Even the language that’s being used for some of the programs, like the “Brown Artist Retreat” — it’s a kind of insular vernacular, it’s how we talk — so there’s this kind of transparency that’s happening where the curatorial process, as well as nuances of our culture, is being very much exposed to a participatory audience.

AD: Just having this space set up the way that it is has allowed for me to connect with the audience that walks in. There are two kinds of perspectives that have come up: where the audience immediately gets it, or instead, tries to offer some solutions.

I graduated from a Curatorial Practice program and I have an MFA, rather than a focus in Art History, and we were encouraged to consider space and place. The role of a curator here in Houston is quite different than in other places. Baltimore was very informative to my practice, and I’m still trying to figure out a lot of what that looks like, but the ethos of that program encouraged working collaboratively to break established barriers in the art gallery. 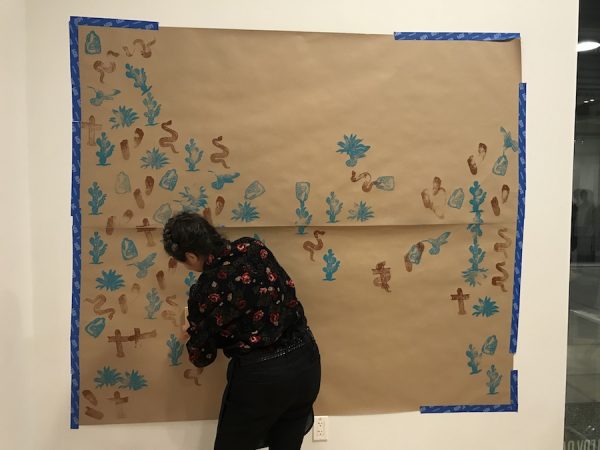 TE: Someone asked me once if curator is like an editor. I really think of it more as of hypothesis or a thesis that you establish and build evidence around with artwork. What is the thread that runs through the art [in this exhibition]? Did you tailor the art to make a specific point? Or are you surveying or gathering info through this collection of artists?

AD: The mico-residencies were very tailored… the program is the part that is the survey…  . How are we creative practitioners talking about the same things? Decolonizing a place, or movement, or the history of something, or offering alternative views.

When I started this project, I had a list of artists that I was calling just to talk, to see where they were, to see what their availability was, trying to explain what this thing was without having any context… and from that list I had a bunch of yesses, and a bunch of nos. The nos are really interesting because when I started talking about the Gulf as a region, or about land politics, there were a few artists who didn’t want to be defined by their geographical boundaries. So, then that became the [measure]… they have to be open to this conversation, they have to be interested in land, or some type of conversation about how their works are either already working in that vein, or there’s something in their practice that would make it interesting to throw into a residency to see what happens.

TE: Do you feel confined in trying to tailor or guide a conversation around Latinidad? And what have you observed in terms of the kind of different audiences here? Are we primed for a cross-cultural revolution, or are we clinging to our identifiers like crazy? 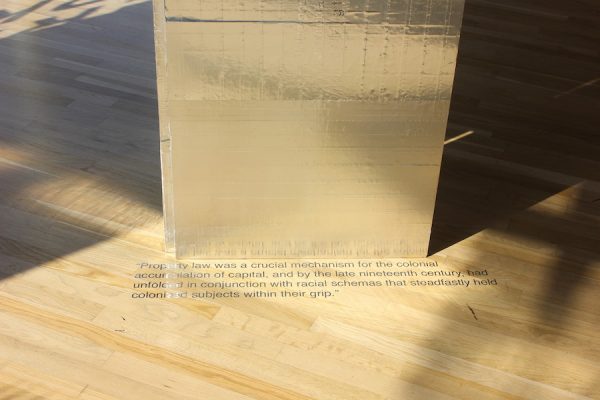 New work from artist Joshua Rios, produced while in residence at DiverseWorks

AD: So, I understand that… it’s messy. Identity is messy and people identify and value identity in different ways. Like when I told you earlier that some artists were like ‘No, i don’t want to be defined by a geographic boundary,’ — that guided me in the way that I was approaching and in realizing that as a curator there’s certain contexts to be aware of. Rabéa [Ballin] doesn’t like labels in the way that they identify; and then Rafa [Esparza] identifies as Brown; Josh [Rios] — even a different identifier; and Awilda [Rodríguez Lora] is Puerto Rican. So for me, instead of putting labels down, it was about offering a show that has the different perspectives and just let it be what it is, and I think that has allowed for a wider range of audiences.

TE: Do you feel, in your position, a responsibility to other Brown people?

AD: One of the things, since I’ve been back in Houston, that I’ve heard people say that I’m always trying to figure out is: “We’re so happy you’re at DiverseWorks, we’re excited,” and I’m like, “Have you seen my work?” I think what it is has more to do with the fact that there is someone who is Brown in this position, and what that means for the city. So I feel like, in some way, yes — there are people who are counting on me, and not necessarily to curate shows that focus on the Latinx diaspora and art and culture all the time, but to be someone that can help to generate new conversation. As a curator, that’s my passion in the first place.

Collective Presence is an evolving exhibition indeed. In the time I was in the gallery, artist Josh Rios (in residence March 9 – 20) decisively placed and installed a fresh work of art. He’ll be back in town soon to sit on a panel, New Digital Platforms, at the Latino Art Now! conference, which will be hosted at the University of Houston early next month. Rabéa Ballin (March 8 – 17), our hometown artist representative, popped in, too, to wrap up her day in the studio/gallery. She’ll be active and present for Collective Presence through the rest of its run. Up next are resident artists Rafa Esparza, of Los Angeles (March 24 – April 8), and Awilda Rodríguez Lora from San Juan, PR (April 8 – 14). Much-anticipated future programs of Collective Presence include Risa Puleo’s and Rafa Esparza’s Brown Artist Retreat: Houston, which is scheduled for Sunday, April 7, from 10 AM to 6 PM.

Collective Presence is on view at DiverseWorks, Houston, through April 14, 2019

Theresa R. Escobedo is a multi-disciplinary artist and curator native to Houston, currently active as the Director of Main Street Projects, Resident Curator at MECA, as a Project Manager for the Arts District Houston, and manager at The Union. She curates, coordinates, and executes programs and projects designed to activate public spaces and to give artists the opportunity to impact neighborhood experiences through creative place-making and social inquiry.