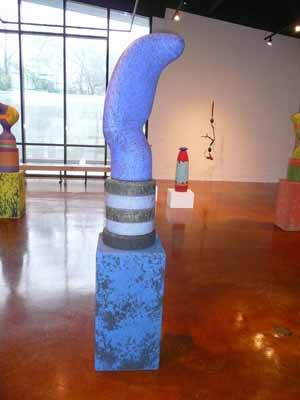 San
Antonio artist Danville Chadbourne’s weathered ceramic
and painted wood assemblages might be the ancient artifacts of an unknown
civilization. Made with clay, wood, stone, fiber and bone, the organic
materials suggest a lost culture closely tied to nature. Representing a vast,
sprawling world of the imagination, Chadbourne’s serene, abstract forms evoke a
wide range of psychological and spiritual states.

His paintings and wall pieces look
as if they are ripped from the wall of a temple. His indoor sculptures could be
religious statues used in rituals. Influenced by science fiction as well as
natural history and archaeology, Chadbourne sees his work as evidence of a
once-great civilization that has declined and been forgotten, leaving behind a
dusty trail of inexplicable objects.

“I am concerned with the
intellectual speculation that we make regarding other cultures, especially
primitive or ancient ones based on our observation of their artifacts,”
Chadbourne said. “This anthropological perception is a key issue in my work.”

A prolific
artist, Chadbourne is usually working on as many as 100 works in his old
converted grocery store studio and small backyard, which will be part of the On
and Off Fredericksburg Road Studio Tour Feb. 20-21. A stalwart of the San
Antonio scene, Chadbourne taught college for 17 years
at San Antonio College
and the San Antonio Art Institute.

But for the past 30 years, he’s
devoted himself to his expansive vision of an alternate universe. Though he’s
exhibited extensively throughout Texas
and New Mexico, during the past
year he’s embarked on a series of retrospective exhibits, beginning last April
with “Retrospective Part 1” at the Blue
Star Contemporary
Art Center.
“Retrospective Part 2” is slated for next fall at Bihl Haus Arts . 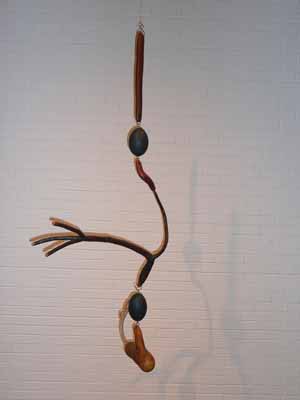 In between,
he’s having shows across South Texas, starting with Del
Mar College in Corpus Christi last
fall. Currently at Gallery Nord in San Antonio,
he’s showing new work, including several pieces suspended from the ceiling that
look as if they could have been made by an ancestor of Alexander Calder .
“Compelling Intimations of Heresy” features a blue egg and antlers suspended
beneath a jutting bundle of smoothed tree limbs. Dancing and spinning in the
air, his suspended pieces have a much lighter feeling than his solid,
hefty-looking pedestal pieces.

His lyrical though somewhat academic-sounding
titles often allude to some personal or philosophical conundrum. Frayed red
cloth is draped over what appears to be a buffalo head in “The Ambivalent Game
of Irreducible Values.” Opposing blue egg shapes battle metaphorically in one
of his paintings, “The Duplicitous Reversal of Expectations.”

“The titles are about what is
happening in the work, at least from my point of view,” Chadbourne said. “They
may seem esoteric, but the titles have to resonate with the piece. The titles
aren’t all serious; some are humorous. To me, they are an extension of the
metaphor.” 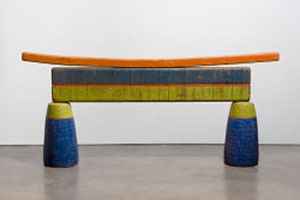 The Suspension of Age

He makes his paintings look like
architectural remnants by coating them with a layer of acrylic stucco, which is
scraped away in flakes. He accents his pieces with driftwood, tangled tree
roots, bones, river rocks and other natural forms. He relies on mineral
pigments to achieve the soft earth tones of green, blue and red – the palette
of the American Southwest. He applies a coat of fresh, bright paint to each
piece, which is then sanded and stained to suggest great age.

He’s also
showing new large, standing sculptures at Gallery Nord such as “Myth of the
Haunted Night,” which has haunting shades of blue evoking a stormy night. With
a form resembling a torso with handless arms placed on a stacked pedestal, his
standing sculptures reflect an early fascination with saguaro cactus. In a 2004
show at the Beeville Art Museum , his outdoor works resembled geometric totem
poles made up of stacked ceramic cylinders, rectangles and rings, providing
foundations for gestural, abstract forms suggesting exotic plants, sea
creatures or the human figure.

“My work is
not figurative or realistic, but they can be anthropomorphic,” Chadbourne said.
“I want to suggest certain kinds of humanlike and animals gestures.”

Solemn and
meditative like a kind of Anasazi Stonehenge , a colorful array of Chadbourne’s
large, totemlike sculptures were installed beside a small stream in a sunlit field
behind the Kirchman Gallery in Johnson City this winter. And as part of the
Rockport Clay Expo and Pottery Fair , Chadbourne will have another show of
“Recent Works” opening Saturday, Feb. 13, and running through March 14 at the
St. Charles Art Gallery
in Rockport. 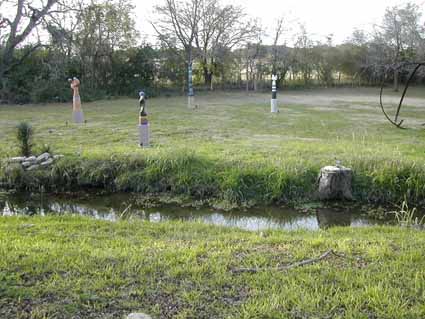