The 17th-century Dutch theorist and artist, Samuel van Hoogstraten, described landscape artists as “the common footmen in the Army of Art.” Maybe, maybe not. Artspace111, in Forth Worth, has a group show of gallery and guest artists titled Nature’s First Green is Gold, and the wide range of landscapes on view encompasses both realism and abstraction through varied media including oil paint, photography, and even beads. This show’s title comes not from van Hoogstraten but from a well-known Robert Frost poem. 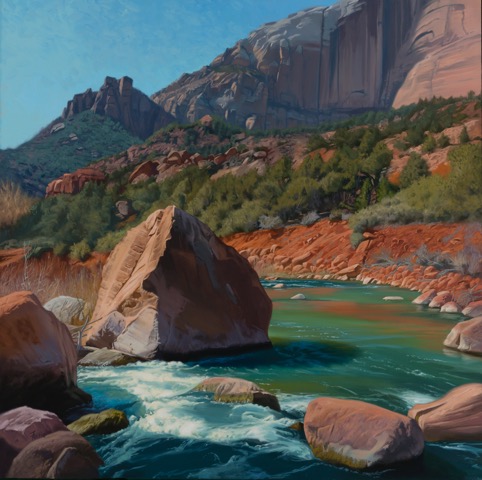 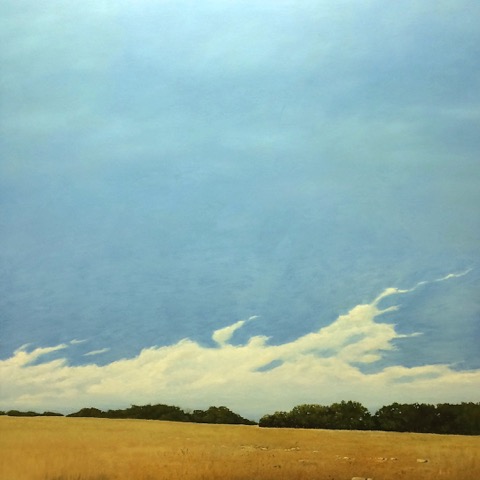 The majority of the artists made traditional and realistic landscapes for the show. Among these traditionalists were Dennis Farris and Scott Lennox. Farris presents a polished, dramatic river scene in vivid color, while Lennox’s canvas is a less dramatic but wistful vista, with a more organic touch. 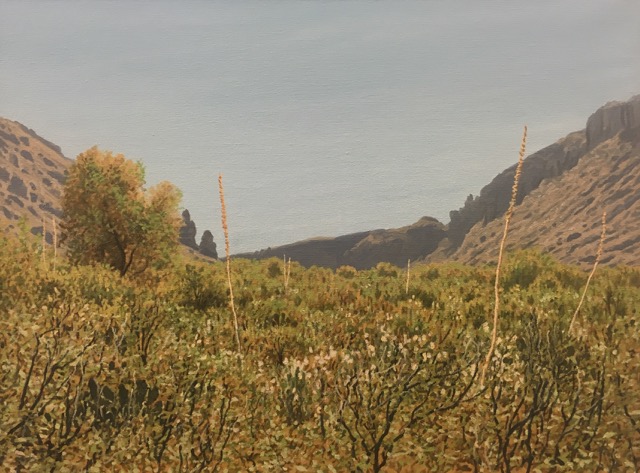 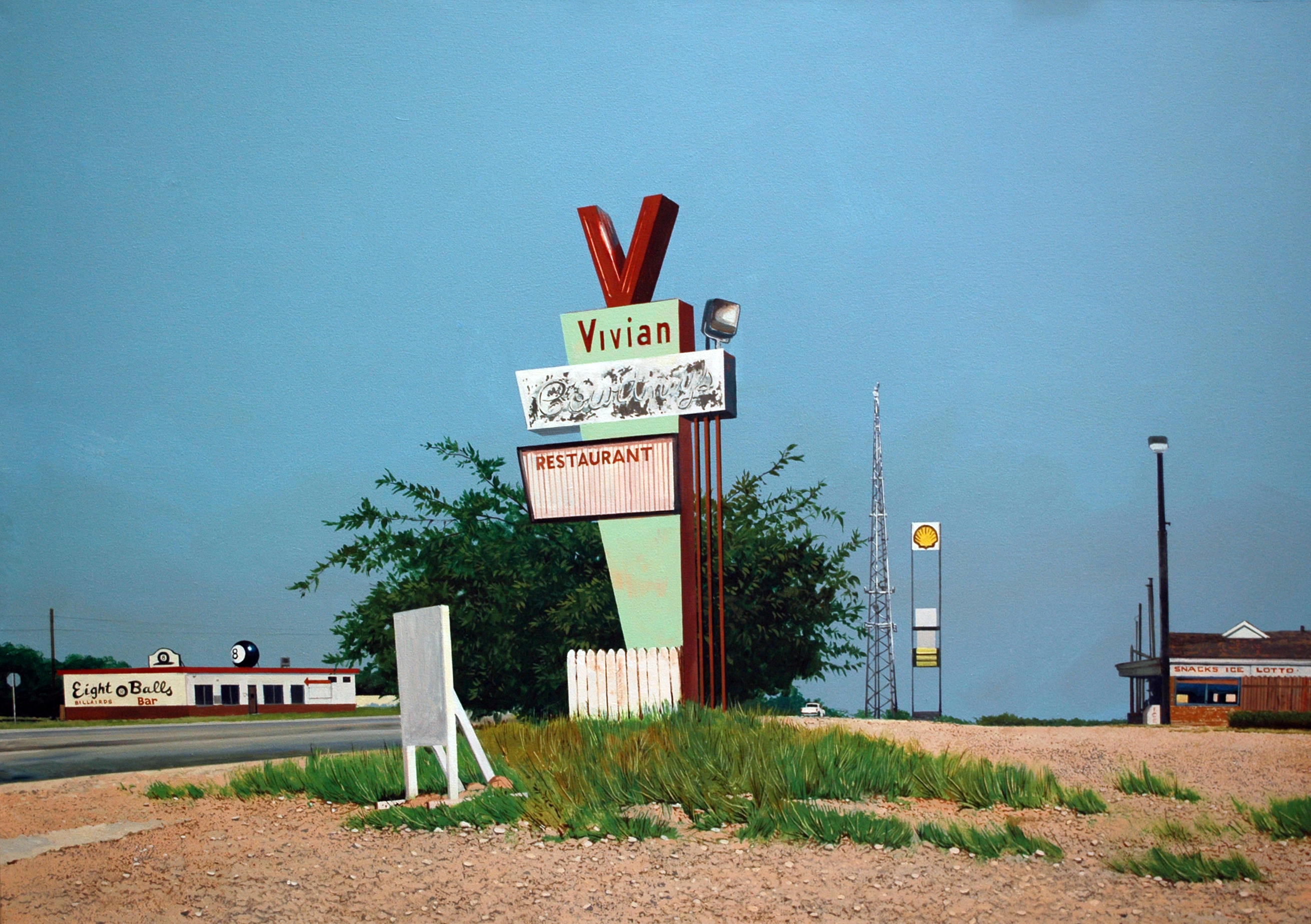 Dennis and Daniel Blagg are in their natural element with this show; Dennis’ canvases are of unspoiled nature, while Daniel characteristically focuses on the urban landscape. Dennis’ Lost Paradise captures the deep space of a canyon, as light brushstrokes suggest foreground vegetation. Daniel revels in still visions of the disused and abandoned, and in Vivian’s he pays homage to a vestigial commercial sign located on Fort Worth’s Jacksboro Highway—Vivian’s Country Restaurant having long since disappeared from the scene. 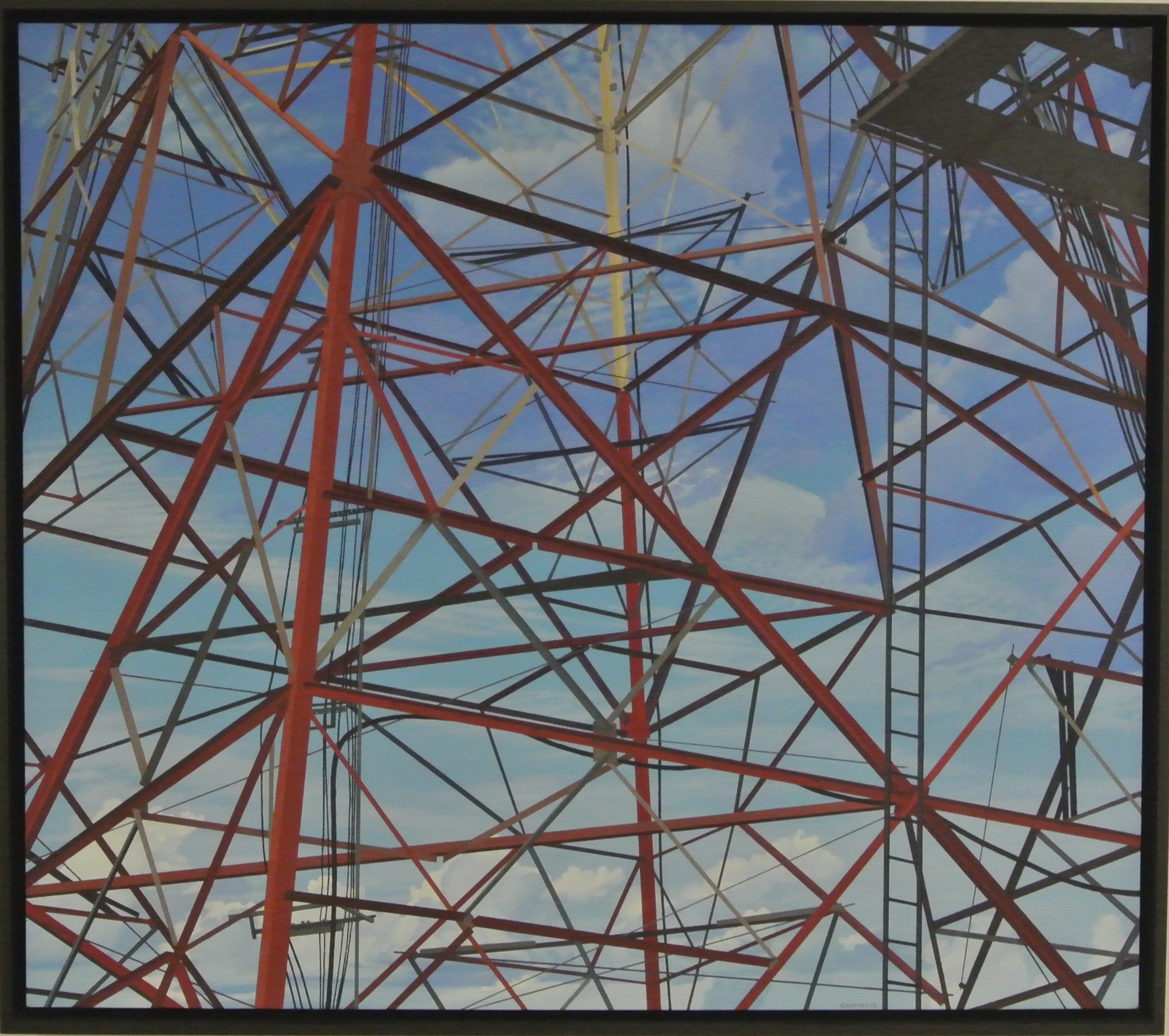 Pat Gabriel combines a man-made structure with nature in Coexistence of Grace. His paintings often feature sky and cloud forms, but in this work he diametrically opposes the open steel structure with glimpses of the sky’s atmosphere. 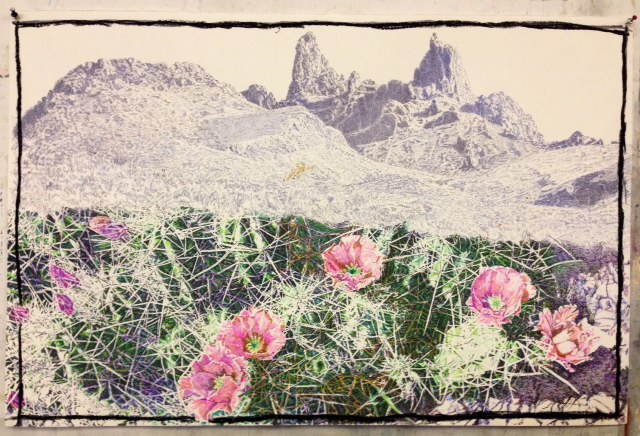 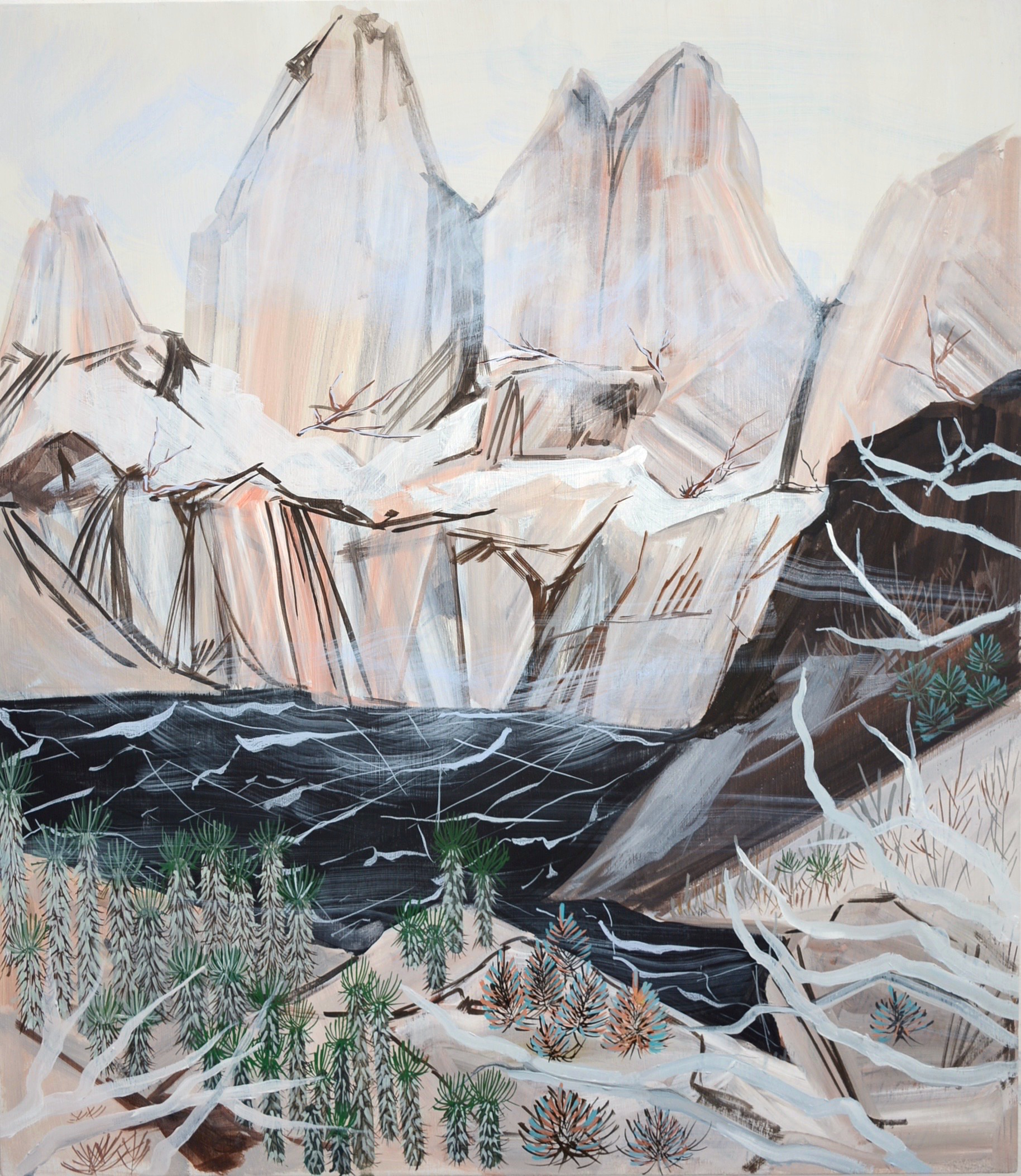 Erika Duque uses a combination of quick expressive brushstrokes over thinly painted backgrounds to suggest plants, trees, mountains and other natural features in Black Lake Mountain. Duque’s Roadside contains a delightful abstraction of a stream that is simply composed of several braided lines of color. 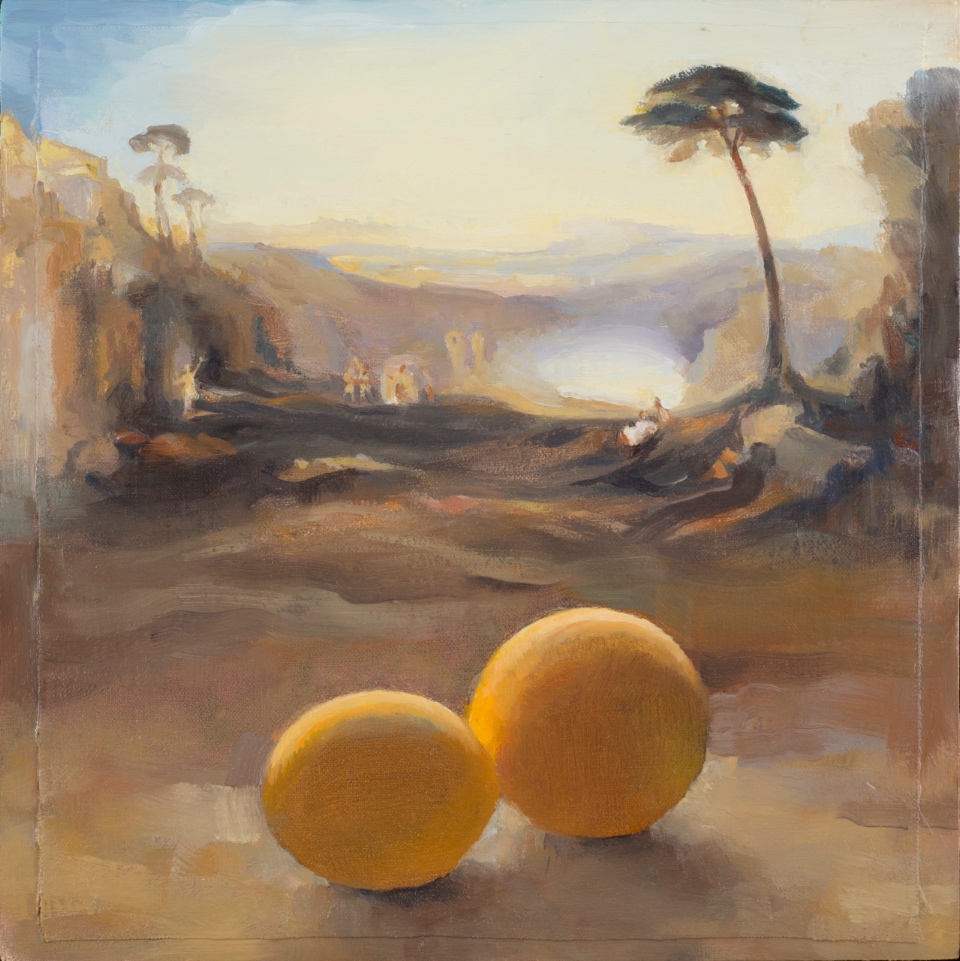 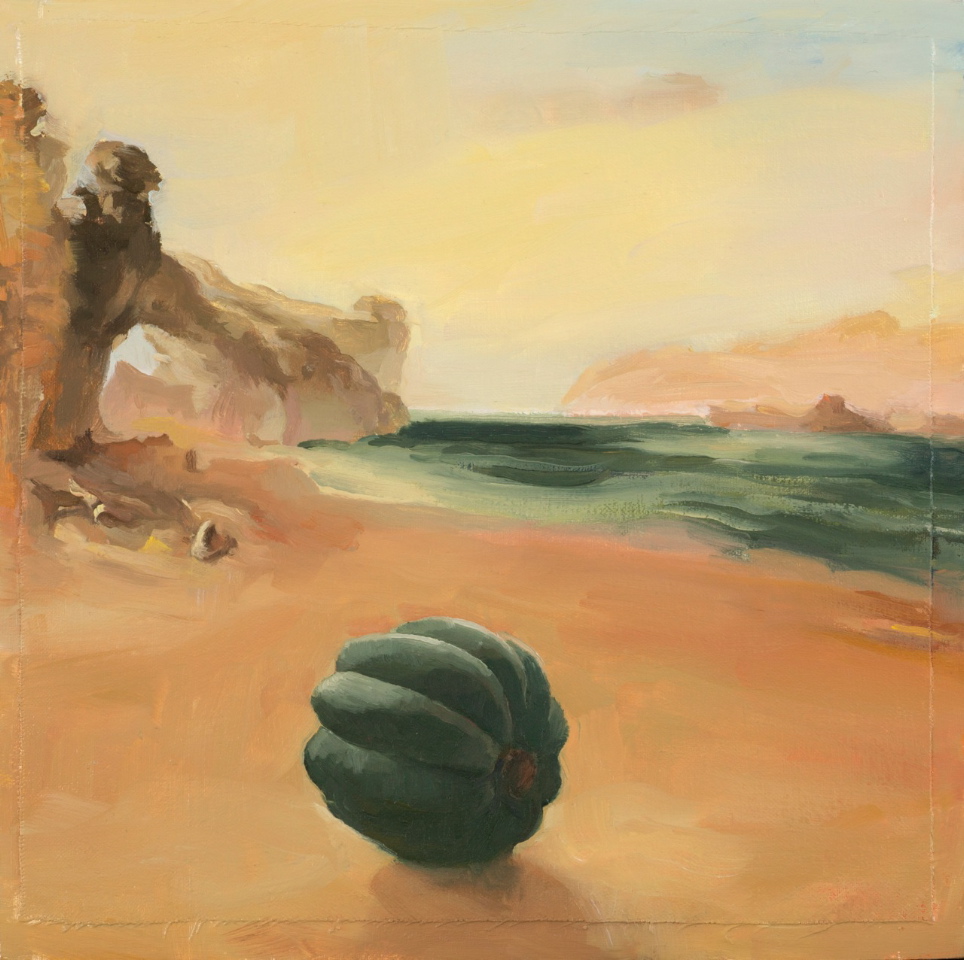 It was interesting to see some gallery artists flex their creative muscles to tackle landscape, even when they typically concentrate on other subject matter. Carol Ivey makes a playful embellishment to her luminous still life subjects by situating lemons and winter squash in the foregrounds of two J.M.W. Turner-inspired vistas. Her diminutive compositions slyly subvert the academic hierarchy of genres by placing a still life—once considered the lowest genre on the academic rung—squarely front and center before a grand landscape tableau. 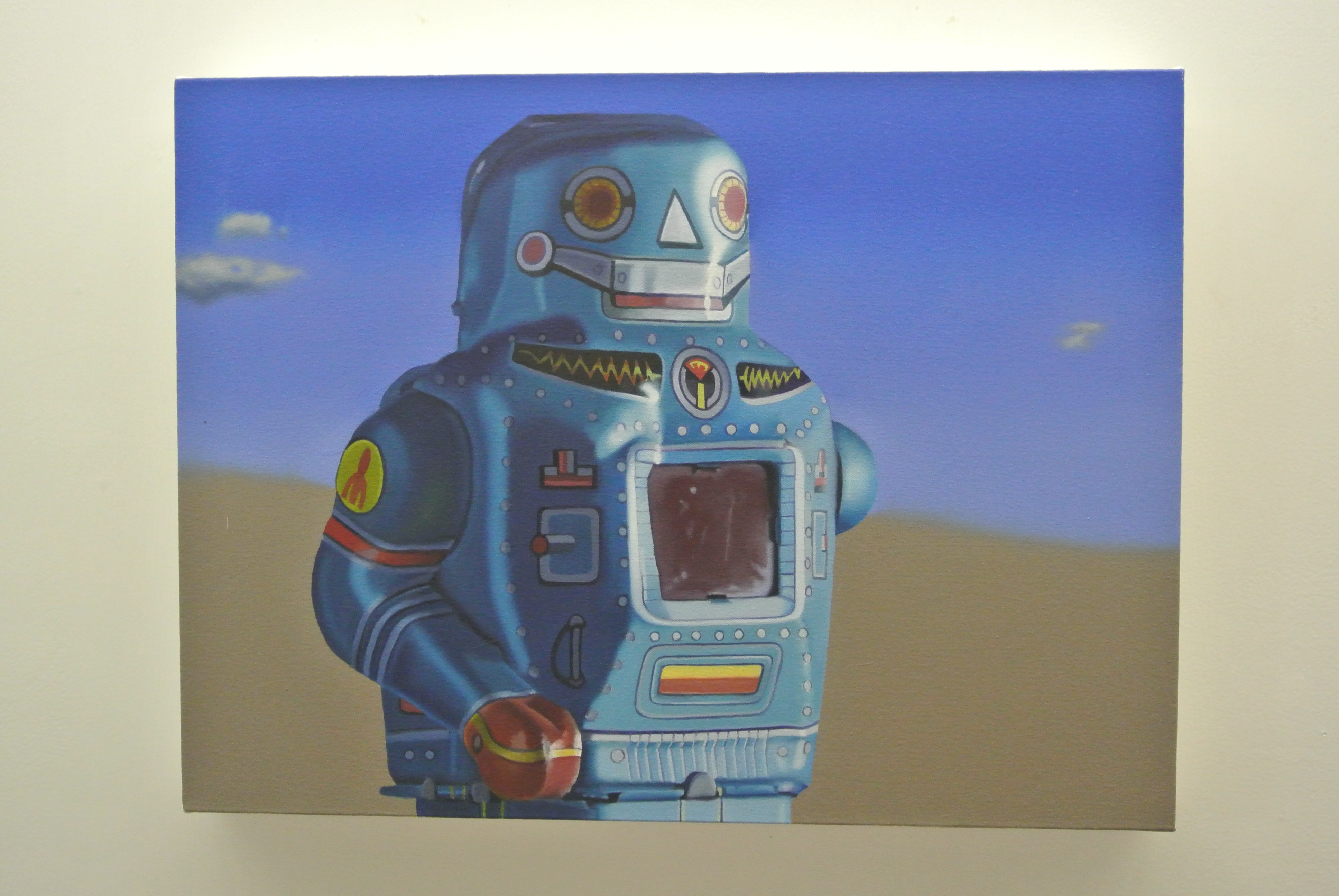 John Hartley doesn’t usually paint landscapes either, so it’s no surprise that his Martian landscape is dominated by a meticulous rendering of a toy robot. The photorealistic landscapes to be found in Mars and in Hartley’s typical works are in the detailed surfaces of the toys themselves. 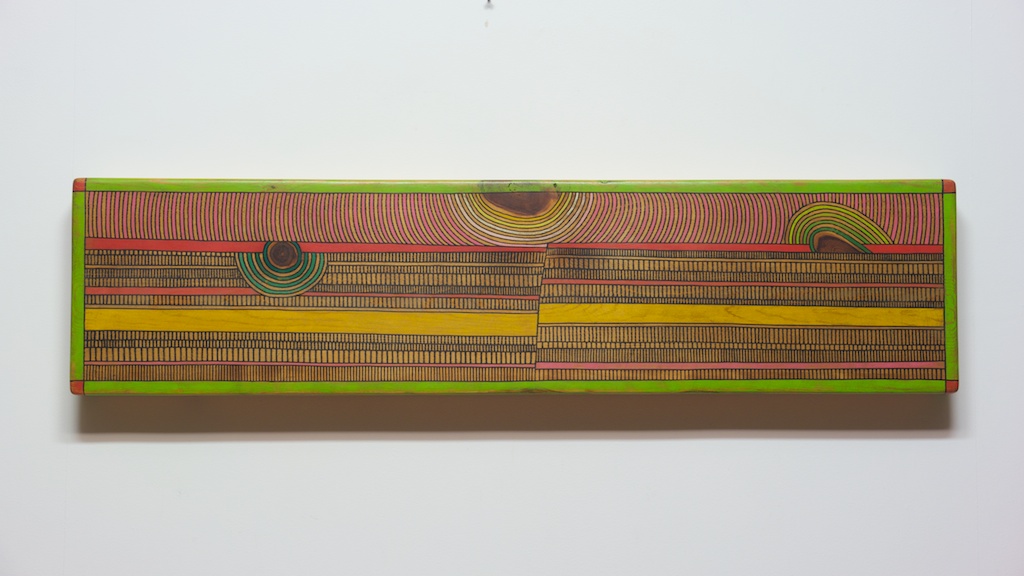 Eschewing realism altogether, Danville Chadbourne’s Geometric Visions – Fracture cleverly marries an abstract landscape with the wood it is painted/drawn on. This abstracted section view of a geological fault features radiating circular forms emanating from actual knotholes in the wood support. 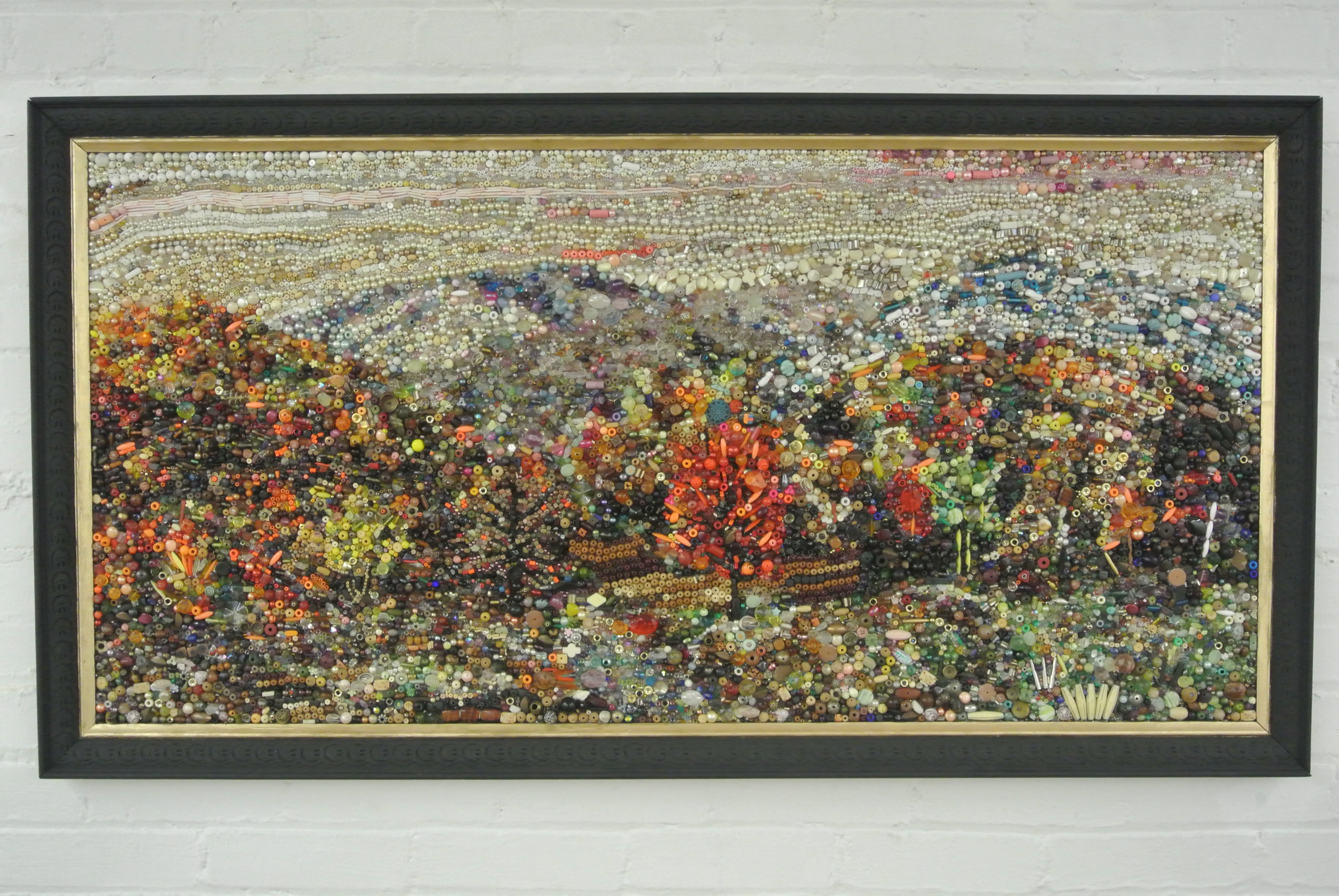 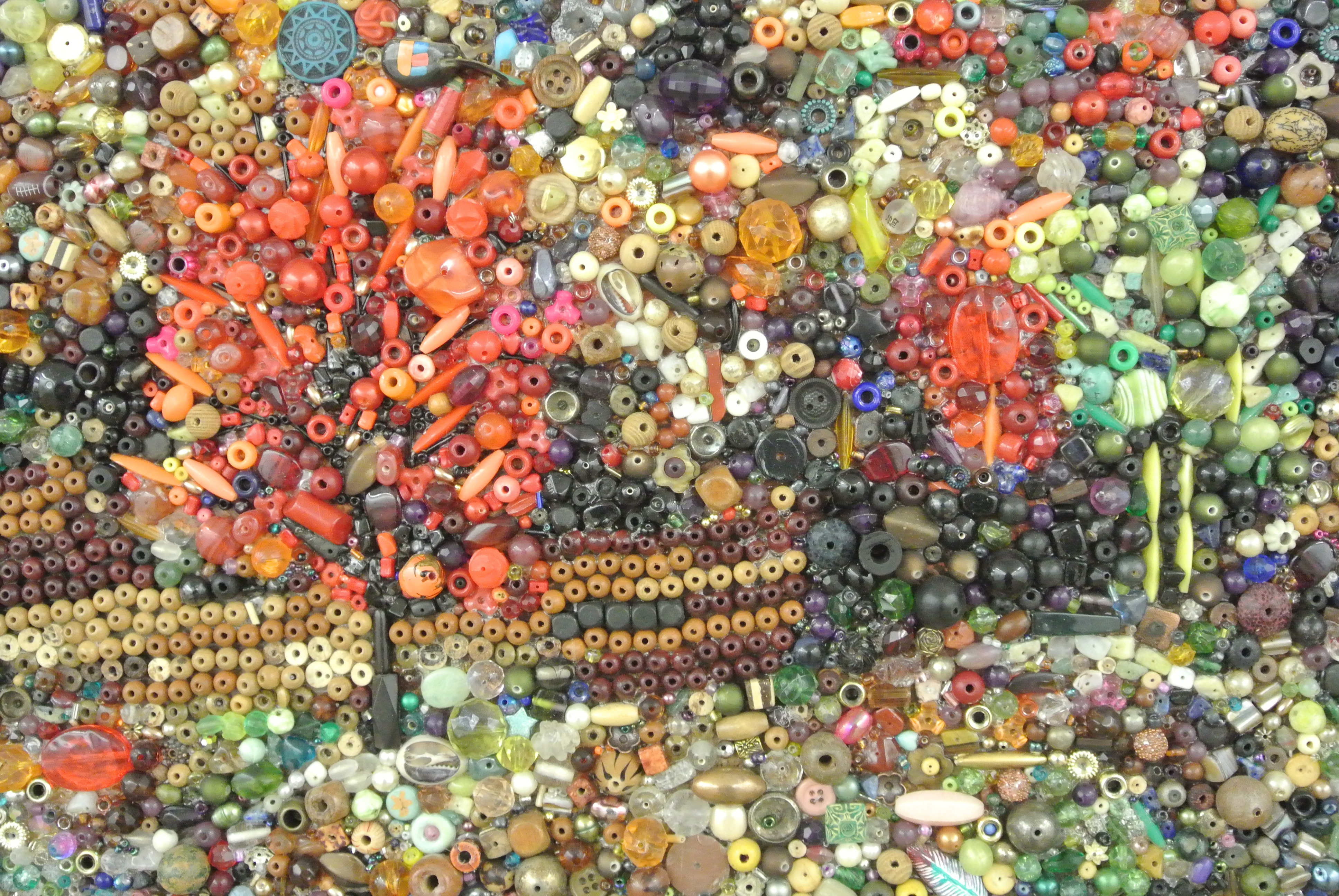 Another inventive and unlikely take on the landscape theme was Kelli Holmes’ beaded confection Beadscape. This mixed-media work exploits the rainbow spectrum of hues and the textural qualities of beads glued on a wood support. 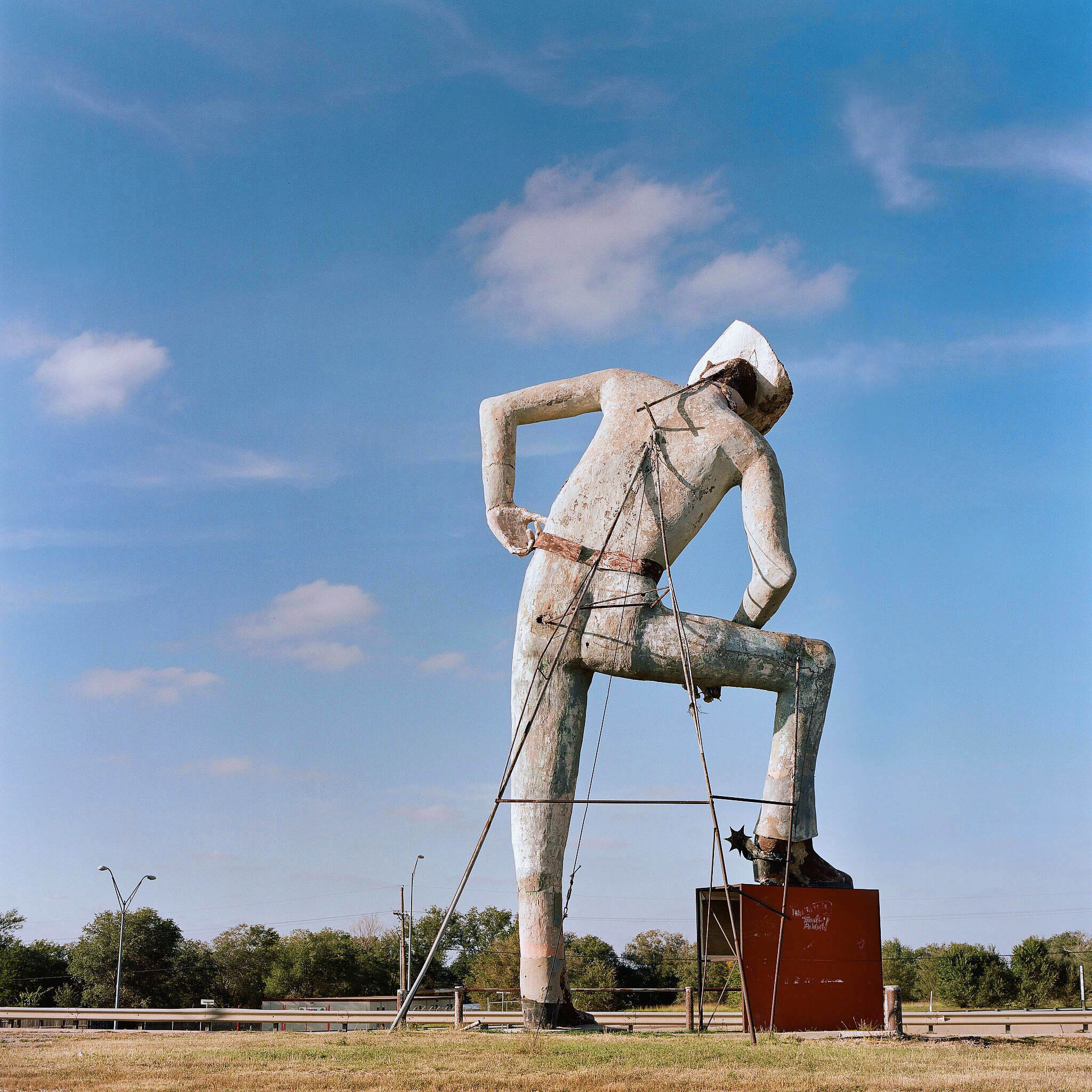 Jill Johnson offers a quartet of color photographs of unique and sometimes wry roadside signs and attractions from her small-town Texas series, including Tex Randall #2. 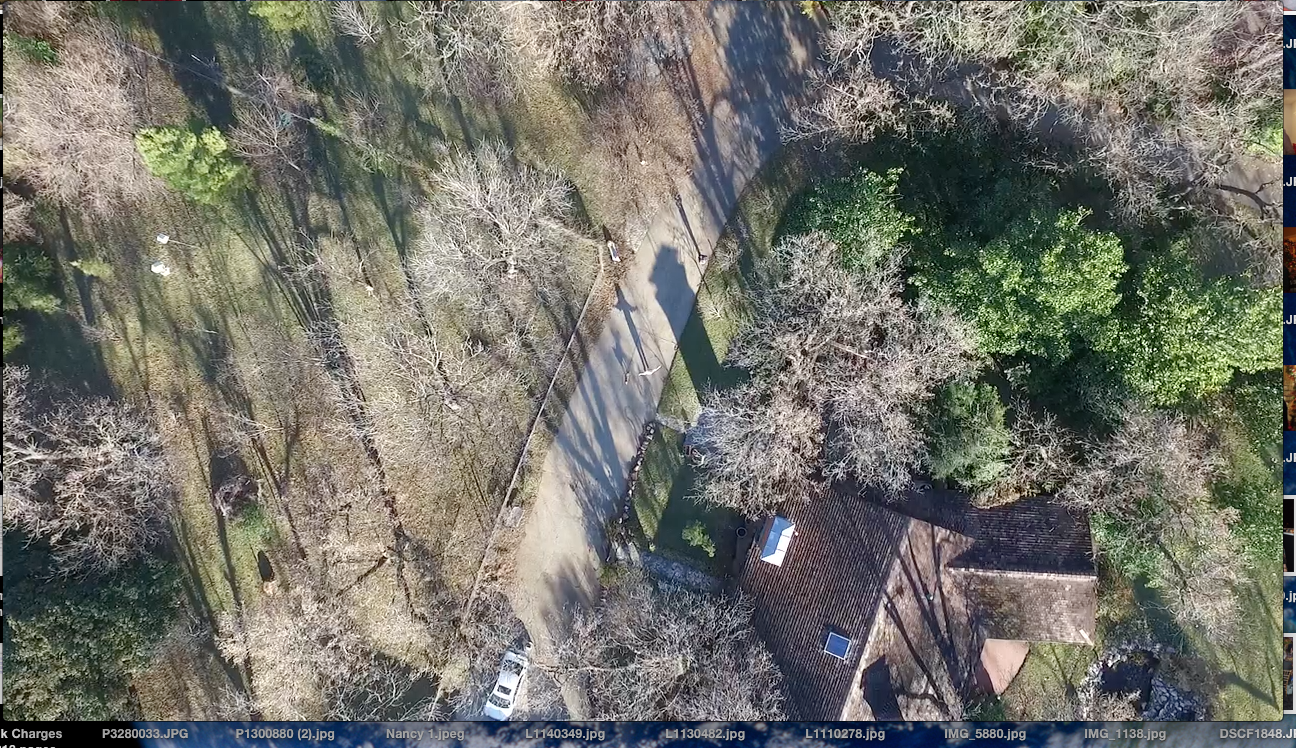 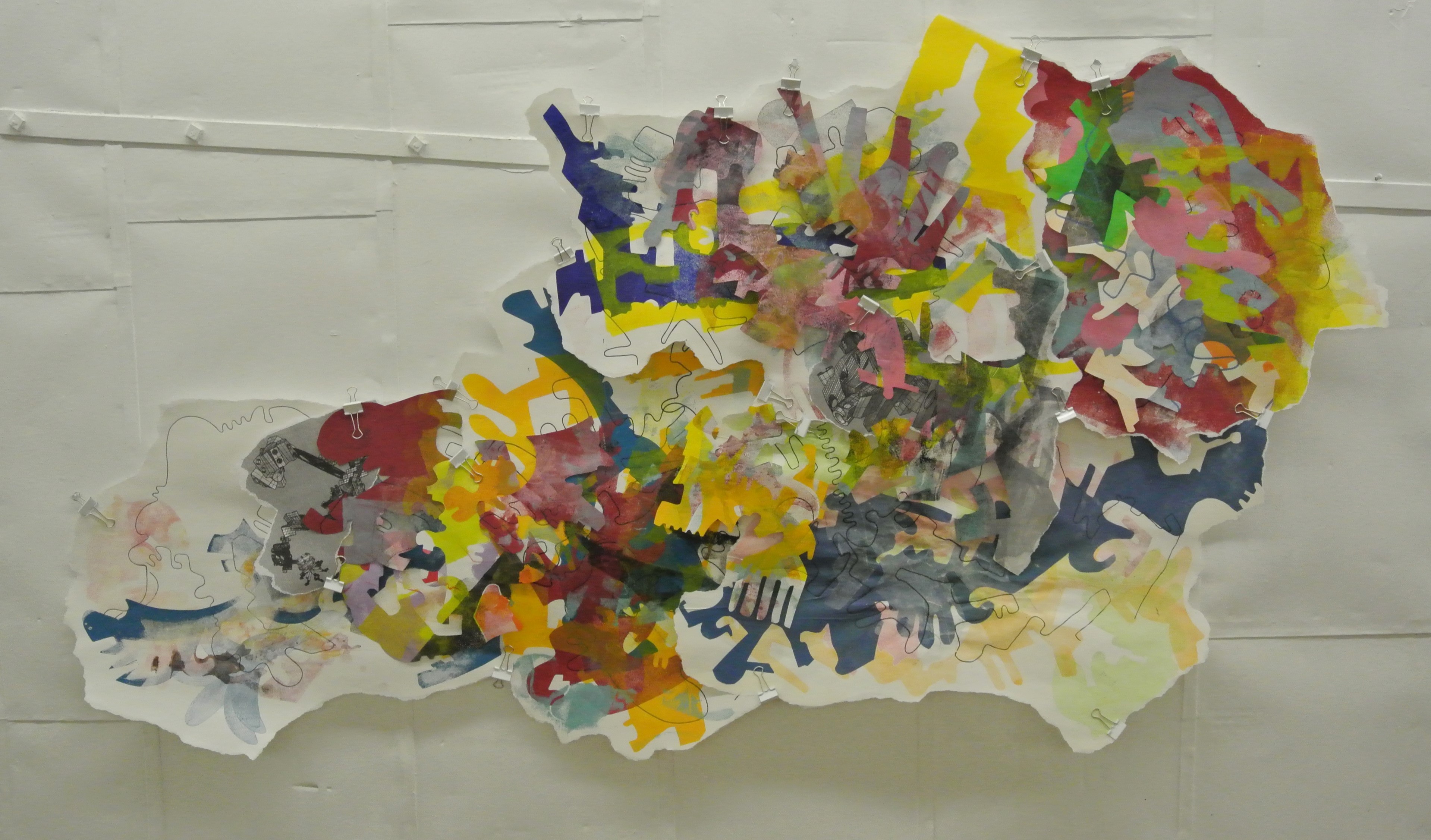 Fred Spaulding contributed one of the most innovative works in the show. Spaulding overlays painted, stenciled and printed computer drawings on torn and cut paper into a free-form collage. This is the first time he’s exhibited one of these works. Reportedly, he has a twelve-foot-long collage that I hope to see installed in a future show. This piece was a satisfying conclusion to a wide-ranging exhibition.

Through March 12 at Artspace111 in Fort Worth.