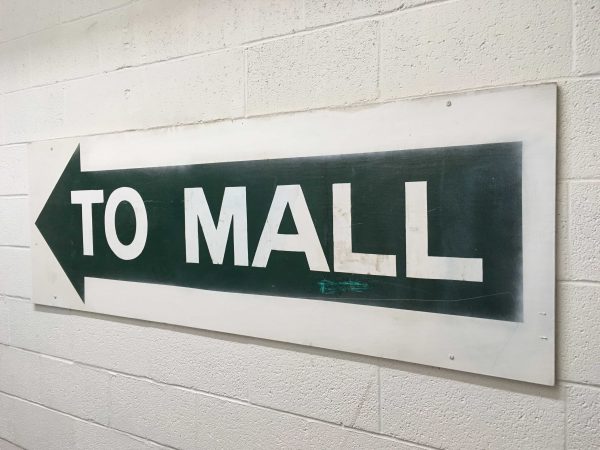 “Amarillo has an art mall.”

The first time I heard that sentence, I didn’t quite know what it meant. Local artists offhandedly mentioned it as one of the attractions of the city, along with the much more famous Cadillac Ranch, Amarillo Ramp, and of course, the Big Texan Steak Ranch, home of the 72-ounce steak. When I heard a little more about the mall, I built up a picture of it in my head: an outdoor strip center in disrepair that houses the studios and showrooms of local artists and opens to the public once a month for the city’s First Friday art stroll. I never imaged the mall as an actual, indoor shopping mall, complete with a food court, mall walkers, and individual storefronts with window displays meant to entice passersby. But that’s what it is. 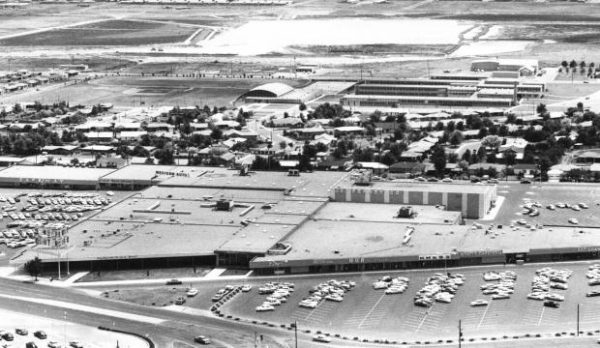 Built in the mid-1950s on the former site of a nine-hole golf course, the Sunset Center Mall was once touted as “Texas’ largest shopping center north of Houston” and featured all of the ‘50s- and ’60s-era standbys: Sears, Safeway, J.C. Penney, and a Shamrock Service Station, among others. The mall thrived through the ‘70s, but then slowly began going downhill as businesses moved out in the ‘80s. After sitting empty for years, the mall was purchased by Amarillo businesswoman and artist Ann Crouch, who renovated the space, turning its storefronts into glass-walled galleries and studios for artists. And thus, in 2005, The Galleries at Sunset Center was born. 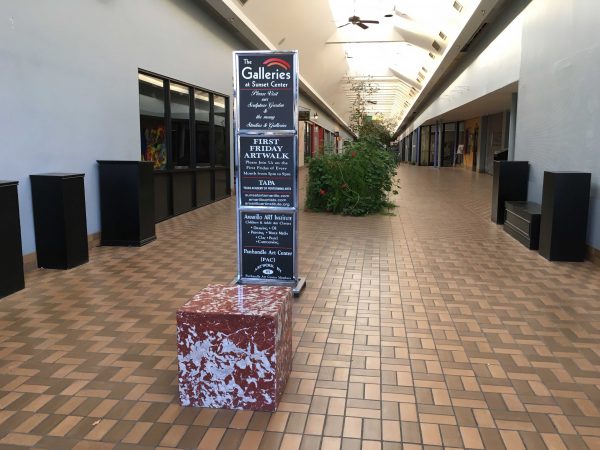 Crouch died last year, but the Sunset lives on. In its early years, the art mall had a more of a DIY ethos that alternative spaces so often start out with. As it became a standby in the community, however, some of the more serious artists either left or were pushed out of the mall in favor of artists who created work that was more palatable to the Panhandle public. In line with this, according to one local artist, Crouch didn’t allow any of the artists renting spaces to show nudes, and would go around the mall policing “inappropriate” works. Walking through the mall this year, you can see that some of the artist residents who passed Crouch’s impropriety test include “da Gourdmama,” (B.J. Smith), an artist who creates artworks out of gourds; The Object Gallery, a space run by Amarillo Museum of Art curator Alex Gregory; and Crouch’s own Sunset Art Gallery, which still occupies prime mall real estate near its main entrance. 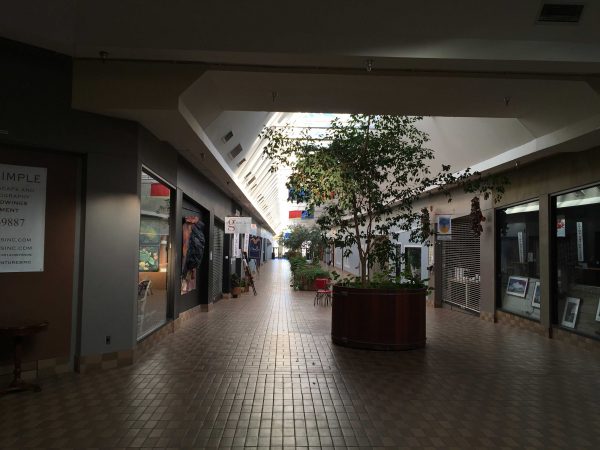 Taking a trip to the mall on a normal weekday is unsettling, and feels like a scene out of The Walking Dead: though the mall itself has regular open hours, on my trip nearly none of the artists were in, so I was left looking at art through darkened windows and closed security gates. It’s like this most of the week, meaning that although the mall is open, it feels deserted, save for the occasional mall walker. This post-apocalyptic atmosphere is reinforced by the strange interior of the mall’s concourse: in one area, potted plants are placed haphazardly in front of a whitewashed mural. Near one entrance, a half-full rack of business cards of various mall artists is displayed in a disheveled state. In another wing, a cherry red buggy sits vacant, still cheerfully advertising “FREE!!! POPCORN.” (I asked my local tour guide if this cart was in fact used to distribute free popcorn on the crowded First Friday art walk. Though it formerly served this function, it seems to have been decommissioned.) 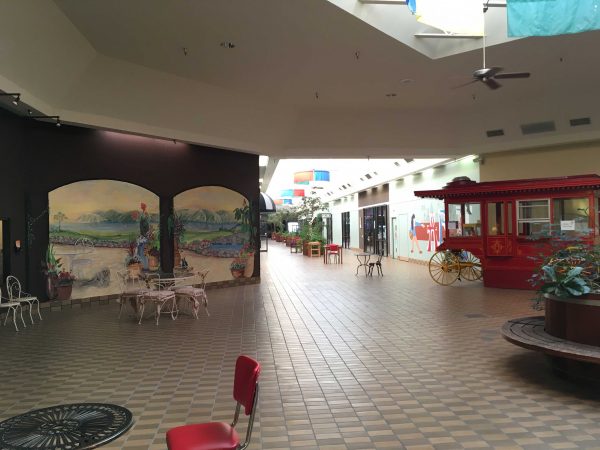 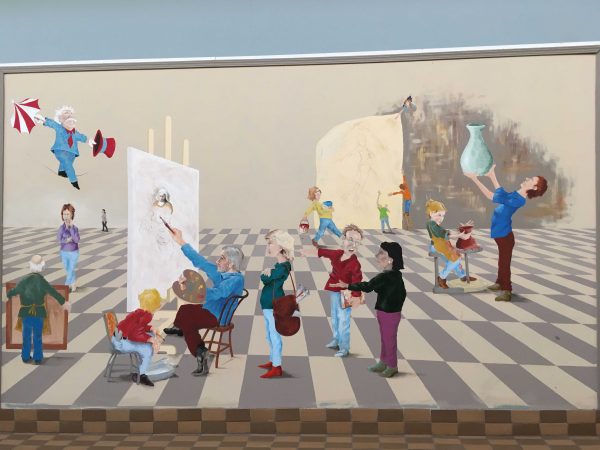 One of the best things about Amarillo’s art mall is the murals lining its hallways. The paintings are both naïve and genuine in their expression and enthusiasm for what art is and what a creative lifestyle looks like. One mural, located near the Amarillo Art Institute, shows a scene from an imagined art class, including a laid-back artist creating an old master-looking painting, ceramicists inspecting their vases, and almost inexplicably (in nod to surrealism — a favorite of amateur artists) a blue-suited man holding a top hat and umbrella as he walks across a high-wire that floats in mid-air. Touch of Art, a mural near the deserted popcorn buggy, doesn’t leave interpretation up to the viewer and instead includes an explanatory text that one of the mural figures points to. I can’t describe this mural any better than the prepared text does, so I’ll let the plaque speak for itself: 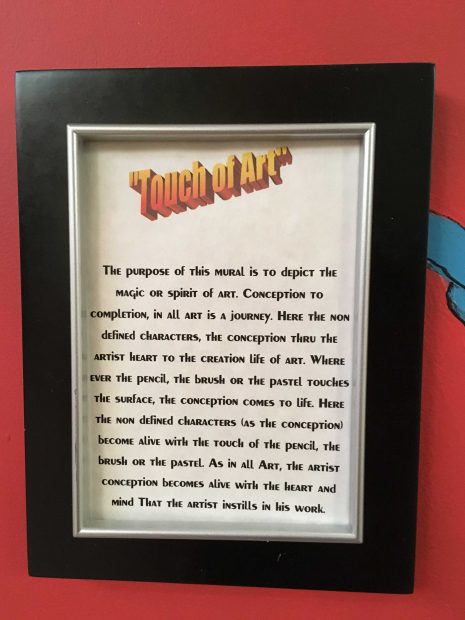 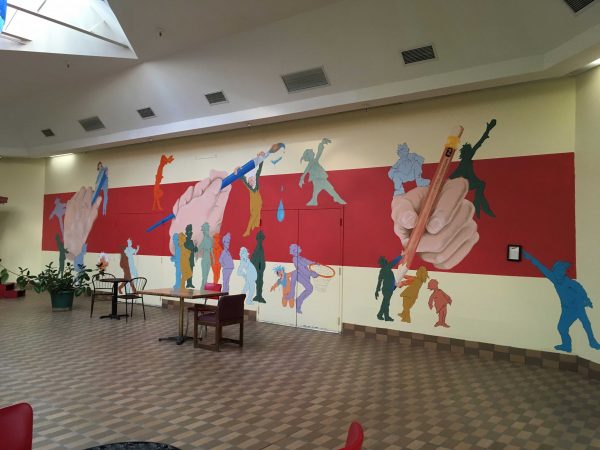 Another mural in the building, though still earnest, doesn’t quite hit its mark. The Evolution of Art, a six-paneled vignette that very loosely shows the past, present, and future of what art can do, feels more like a satire of what art is — a gag that only the mural’s creator is in on. The description of the painting alone sounds like the set up of a convoluted joke; the piece depicts the cave paintings of Lascaux, Michelangelo’s David, a stereotypical abstract expressionist wearing a beret and throwing buckets of paint onto a canvas, Norman Rockwell, a robot painting Vermeer’s Girl with a Pearl Earring, and a child drawing on the wall. The narrative it weaves together is disconcerting, especially when you consider that the “evolution of art” ends with a child scribbling away. In a way, the mural feels like an ingenious conceptual work, the product of an artist who is fed up with the art world at large and wants to express their dismay through a well-executed but distressing painting in the concourse of an art mall in Amarillo. Plausible, but unlikely. 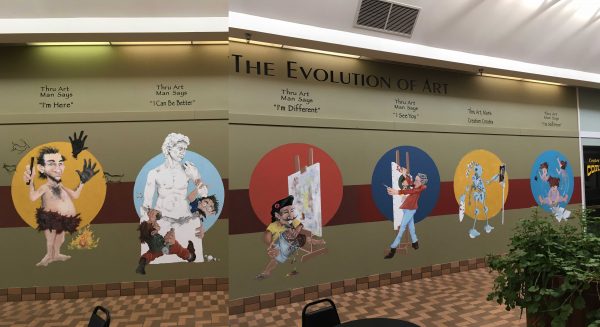 Other bits and pieces of the mall that stand out include: a Christmas tree that was obviously left up well past its tear down date but to compensate has been decorated with fake roses, paper hearts, and a cherub in lieu of an angel (I visited the week of Valentine’s Day); a seemingly disingenuous but likely sincere gloomily lit sign that reads “Welcome Art Lovers”; a registration station for mall walkers that’s obviously self-policed because the mall is open to the public anyway; an out-of-place mural depicting, among other things: potted plants, an idealized landscape featuring heavenly lit hills, and a perplexed cat who seems to confoundedly gasp “Who, me?” (I learned that this mural is painted on the side of a bingo hall, one of the only non-art businesses left in The Galleries at Sunset Center.) All of this is in addition to the sculpture garden outside the main entrance that includes, among the many not-so-good sculptures, an active koi pond that’s home to Crouch’s very old, living, prized catfish. (The old timers at the mall talk of the catfish legend unprompted. I can only confirm the existence of the catfish, not the validity of its backstory.) 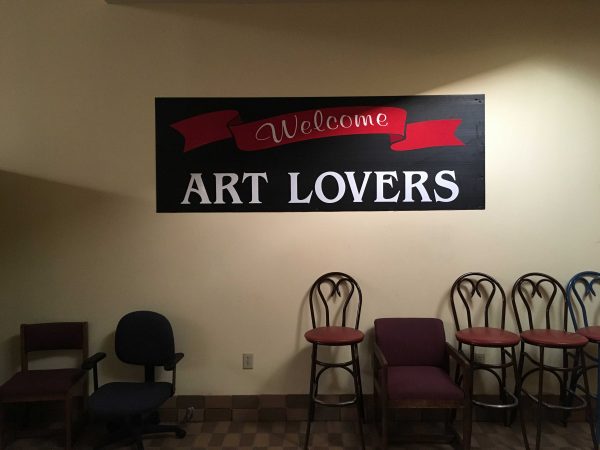 As I walked through The Galleries at Sunset Center, it felt like I was tripping through time, and through someone else’s dream. The art on view in the mall today could very well have been there when it first opened as an art space in 2005 — the kitchiness of black-and-white photographs of farm animals, paintings of waterfalls, and bronzes of bull riders will live on well past our lives and into eternity. The whole experience — the murals, the unabashed sincerity of the work in the space, and the fantastic setting of a whole, near-desolate mall that feels trapped in the amber of 1982 — sounds more like an urban myth. And yet, it’s real. 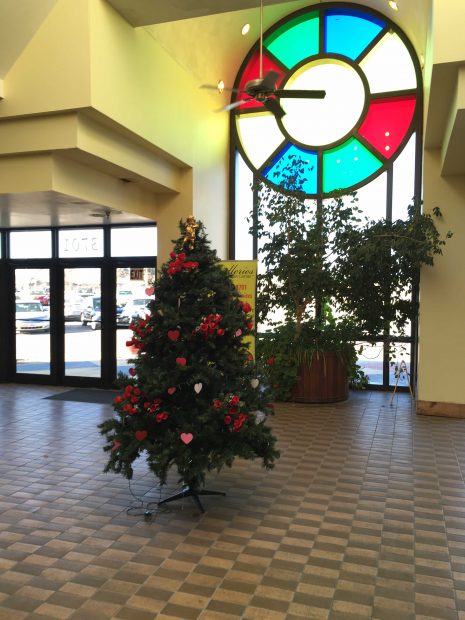 Amarillo has an art mall. You have to see it to believe it. 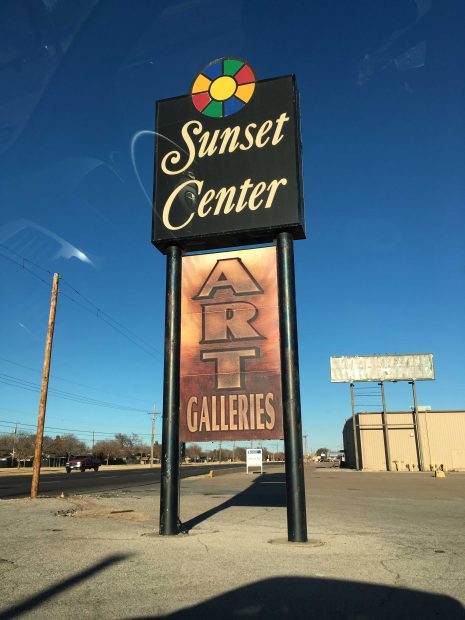 Thanks Brandon for that dizzying trip through the mall. Sounds like a great place for a scavenger hunt, costume party, or crocquet match.

Such an interesting piece. One focused on criticizing and belittling something that is trying to do good in the city. Sure, you didn’t like Sunset, you came during the week when most artists are working because let’s face it, being a full-time artist in Amarillo Texas is not feasible for most. Perhaps you should work some on your journalistic integrity and create purpose that is positive instead of meant to drag others down.

This write-up is hard to follow. Do you like the art mall and you’re trying to promote it, or do you hate it and are stating an obvious fact that it exists?
Personally, as a frequent visitor to the Sunset Center and Amarillo Art Institute, I love it. The first Friday art walks are a ton of fun. My whole family enjoys going to walk around, look at amazing art, and talk to amazing people. Not only that, but the Art Institute offers a ton of fun art classes for all age ranges. They also do a lot of work with our community (schools, nursing homes, foster families).
I would recommend doing a full analysis of every aspect of a place before writing up a piece that doesn’t do justice to the site.

It’s kitsch, it’s weird, and it’s “conservative”- no nudes! Sure, this is a critical write-up.

But, I don’t think that means BZ doesn’t love it, too.

I thought real journalists checked their sources and the back story. Plans are underway to update The Galleries at Sunset. We will have a World Class Art School and artists in Residence. With the death of the owner and having to deal with probate, it has not been an easy year. We certainly appreciate your stopping by, wished you had taken the time to talk to more than one negative person. Some of us are working very hard to make sure the Center stays open. Come back on a First Friday ArtWalk. It will make you happy.

As a kid growing up in Amarillo, Sun Set Center was a huge part of my child hood. Every September a few days before school started, my Mom and us kids made the dreaded yearly trip for school clothes. To us kids, it felt like Mom had us try on every out fit in our sizes. It would take half the morning to find 5 out fits for each of us 6 kids. My sisters had it the worst, as they had to try on skirts, blouses and dresses, slips, not to mention shoes and of course the 3 oldest girls and boys each got a new winter coat, while the rest of us had to settle for hand me downs. The high light of our shopping trip was going to the new pizza hut for lunch. How i miss that mall. hate to see it no longer used as a shopping mall.