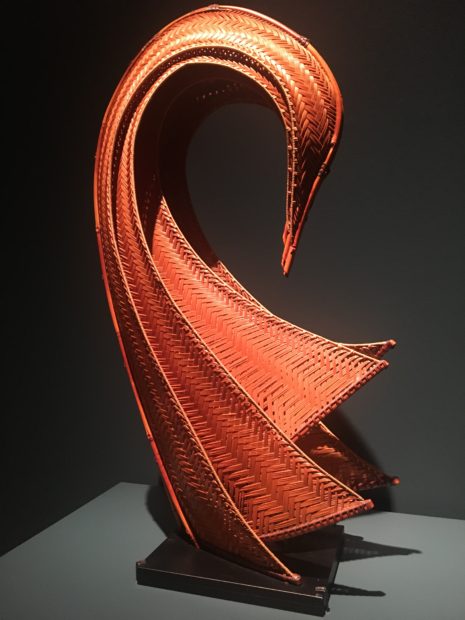 The subtle irony in Modern Twist, an exhibition of mostly post-war Japanese bamboo vessels and sculpture on view at Asia Society Texas, is that they feel ancient. They’re not affected to look ancient—they’re unquestionably modern. Several of the works incorporate unconventional materials like steel wire, Styrofoam or coats of clay silt, clearly marking them as part of the opening up and expansion of form characteristic of Modernity. Like all art forms in all regions of the world, Japanese arts and crafts underwent their own turbulent entry into the 19th and 20th centuries. Japan, after all, had been exposed to some of the earliest forms of European Modernism when Jesuit priests and Dutch traders reached their shores in the 16th and 17th centuries. But if European Modernism ultimately hasn’t been all that kind to the idea of craft—the careful, skillful, and above all, handmade transformation of ideas into form—the vessels and sculpture in Modern Twist give hardly an inch to an iron-clad attachment to craft even as they innovate and expand their traditional canons of form. 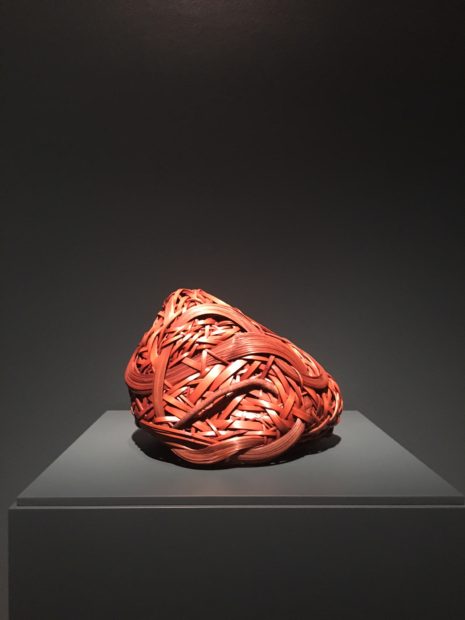 Japanese craft is protected and regulated by academic state institutions and its historical continuity of form is ensured by the practice of passing knowledge and technique down from generation to generation—from fathers to sons (and more recently, daughters), masters to pupils. The level of skill in any system of arts and crafts is a fairly reliable measure of the level of control in the academy. The hierarchal system of quality control and historical continuity in Japanese craft is, I think, what allows the extraordinarily fine and beautiful objects in Modern Twist to occupy a place in both antiquity and modernity. Tradition, emerging as it does out of deep history, is crucial in the formation and identification of human identity. The Japanese learned early on, with an influx of Jesuit missionaries, that cultural amnesia is more dangerous than bullets or bombs. 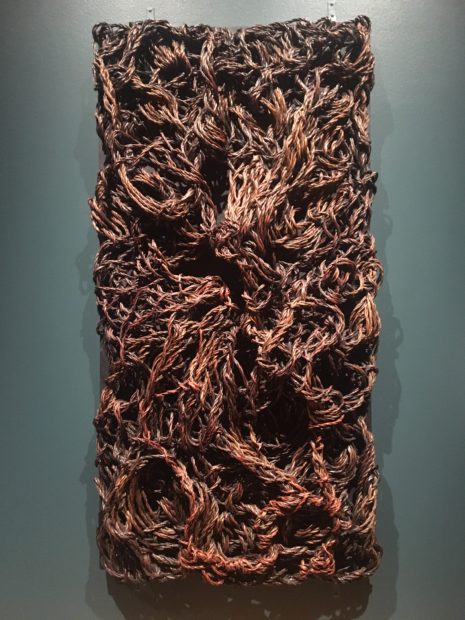 Nagakura Ken’Ichi, The Clinging, Fire/“Rilka”, 1993 Bamboo (madake), lacquer. Minneapolis Institute of Arts; gift from the Clark Center for Japanese Arts and Culture, formerly given by Angela and Takashi Sawano.

People need their traditions. It’s psychological gravity. It’s what keeps us from flying off the surface of our cultural planets. But we also need to be able to allow those cultural traditions to grow without forgetting where they come from. The many “dark ages” in history are arguably about forgetfulness more than anything else. Humans are flighty creatures, quickly distracted and easily entertained. The Japanese academies and master/student relationships, from which the objects in Modern Twist emerge, attempt to preserve the knowledge of the past, while recognizing that, like all natural things, form undergoes change and transformation from one generation to the next. 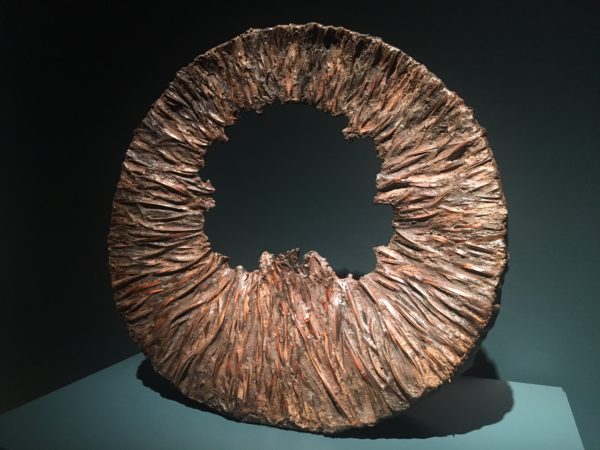 Artistic traditions and the objects they produce don’t just spring into existence.The vessels and sculpture in Modern Twist take a long time to make. They’re made carefully and they can’t be rushed. Embedded in this fact are virtues like patience and deliberation. Imagine if our political leaders had a fraction of the physical and intellectual control that every one of the artists in Modern Twist possesses. This is just to say that the political value of arts and crafts lie less in what we imagine to be the separate realm of their content or function and more in the methods of their production. This is made most obvious in the fact that, despite the tradition of bamboo crafts being built upon the creation of functional objects like baskets and vases that play roles in religious ceremonies and environmental beautification, the functionless, purely Modern sculptures displayed next to the vessels exhibit the same careful, thoughtful attention to form, technique and tradition. 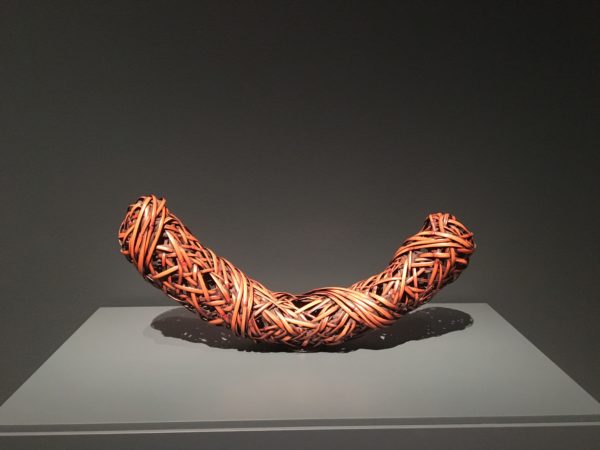 In the transition from artisan to artist, the masters in Modern Twist have lost little of their commitment to traditional form, teaching us that the divisions between form and function are often illusory. But it would also be a mistake to imagine that the abandonment of strict function in this tradition is not a radical departure. It is. If people are flighty it’s because we’re restless for freedom. We love exploration. We need to move on. Think of it as a breakup. We learn from our past. We wouldn’t be who we are without it. The subtle beauty of change and tradition in the work of these artists and artisans might have something to teach us about the difference between leaving home and running away.

Through July 30 at Asia Society Texas, in Houston