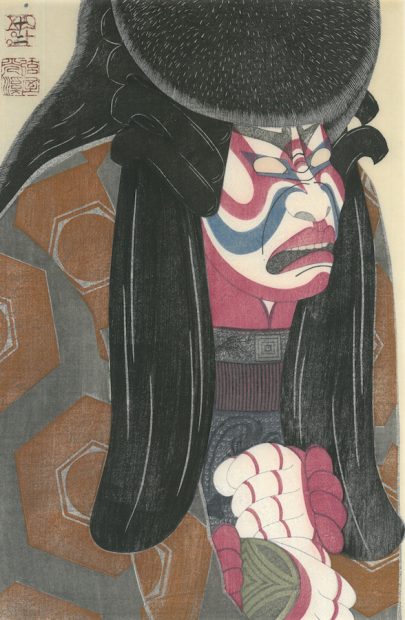 I’d guess that not many Texans have seen a live Kabuki theater performance, but for the next few weeks at Houston’s Asia Society, you can get pretty darn close. Tsuruya Kōkei: Modern Kabuki Prints Revised and Revisited is an unprecedented display of 77 Kabuki actor portraits captured vividly and masterfully by one of Japan’s most renowned contemporary woodcut printmakers. Kōkei — who was the resident artist at Tokyo’s Kabuki-za Theater from 1978 to 2000 — depicts his subjects in the middle of their electric performances: sneering, weeping, or reaching for a sword. Their elaborate headdresses, colorful costumes, and Kōkei’s seemingly infinite range of hand gestures and facial expressions make you feel like you are inside the spectacle. 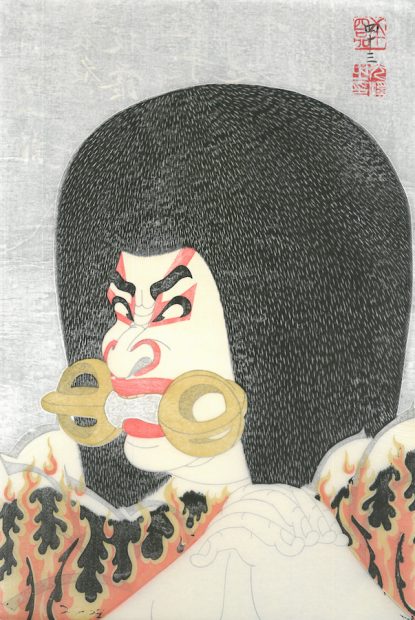 Kabuki theater and woodcut printmaking have long been connected. For centuries, audiences have been buying actor portrait prints as souvenirs of their favorite performers and plays. Kōkei follows this tradition, but with a fresh take. In an interview with the exhibition’s guest curator Dr. Kendall Brown, the artist says, “I think capturing trends in the age I live in is the most important role of a painter.” A self-taught, interdisciplinary artist, Kōkei has developed his own techniques and style. His influences include European old master paintings, Buddhist sculpture, Noh masks, manga, and modern Japanese pop culture. 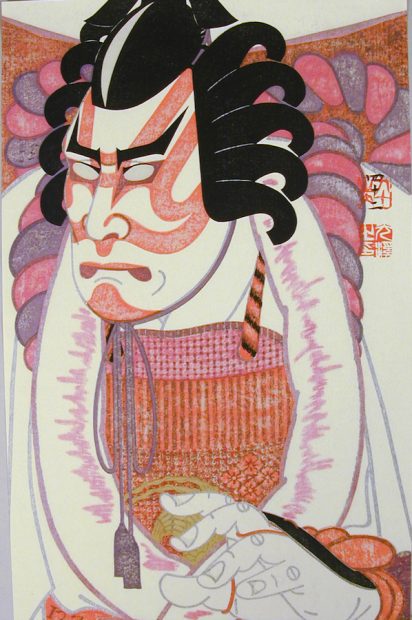 Woodblock printmaking came to Japan from China in the 8th century, but today Japanese woodcut is more commonly associated with the rising waves, beautiful courtesans, and snowy mountains of Edo period prints (1603–1868). Kabuki portraits are also a significant component of the art, and Kabuki theater was pioneered by female dance troupes in Kyoto around the same time that this print style was developing. Kōkei collected prints by Katsushika Hokusai, Kitagawa Utamaro, Utagawa Kuniyoshi, and other Edo artists for years before finally beginning his own art practice at age 32. Kōkei’s print collection has provided a fundamental aesthetic and historical grounding for his own work.

But Kōkei’s central inspiration as a kabuki portraitist was Tōshūsai Sharaku, a mysterious 18th-century Japanese woodblock printmaker about whom almost nothing is known. Overlooked in his day, Sharaku is now seen as a groundbreaking innovator, and his small body of prints are considered masterpieces. This exhibition pairs several of Kokei’s kabuki actor portraits with Sharaku’s. Seen side by side, rich connections emerge between the artists’ economical compositions, exquisite palettes, and expressive use of hands. It’s an especially effective way for us to understand Kōkei’s roots, and it’s also a rare treat —  Sharaku’s prints are not often displayed publicly. 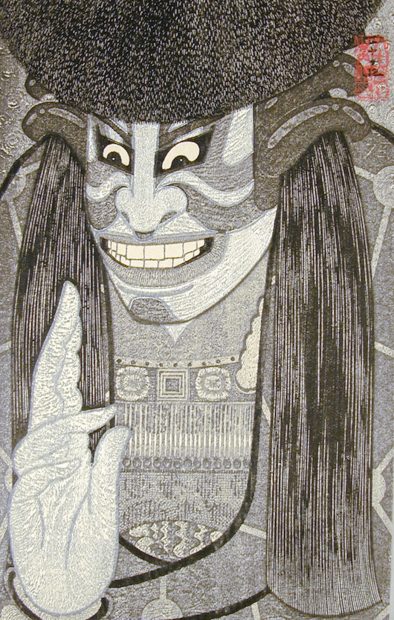 Although his father and grandfather were painters, it was Kōkei’s older brother who initiated him into the world of art. As a child, Kōkei was fascinated by the woodblock prints and wood sculptures that his brother made in a high school arts and crafts program. Kōkei has said that his own woodblock prints are dimensional, like sculpture, and his favorite part of the printmaking process is carving his designs into the block. His preference for carving magnolia wood —  which is softer than traditional materials like cherry or zelkova —  opens up a wide range of experimental cutting techniques. This is evident in a print like Danjūrō XII as Akushichibyōe Kagekiyo in “Gedatsu” (1992), where the figure’s skin, clothing, hair, and hat all display skillfully subtle variations in texture and coloration.

But Kōkei’s technical inventiveness doesn’t end there. Unlike traditional woodcut printmakers, the artist executes every phase of the process himself, from designing to carving to printing. He uses Japanese ganpi paper, which is so thin that his prints appear on both the front and the back of the sheet with nearly equal strength. “In some cases this was done for economic savings, but it was in part a creative challenge,” Brown told me in a recent email. Kōkei’s paper choice is also a link to his kabuki print predecessors, who printed on cheap, thin paper to sell to their large theater audiences.

In 2017, at age 72, Kōkei returned to printmaking after a nearly two-decade hiatus. His series Banzai Ukiyoeha Gosugata (Long Live the Five Figures of Ukiyo-e) pays tribute to five master Edo-era printmakers who came before him. Kōkei’s elaborately layered portraits are full of quirky and clever details that refer to his subjects’ most famous prints. Those artists worked well into old age. Let’s hope that Kōkei does too.