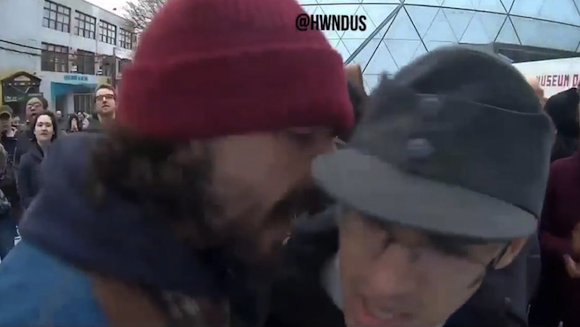 Screenshot of HE WILL NOT DIVIDE US via Forbes

Shia LaBeouf, the actor who stubbornly wants to be known as a performance artist, has been invited to participate in Houston’s Experimental Action, a three-day international performance art festival, via an open letter.

Most recently, LaBeouf and collaborators Nastja Säde Rönkkö and Luke Turner have installed a camera outside the Museum of the Moving Image in Queens, New York, for a four-year live-streamed project called HE WILL NOT DIVIDE US (2017) to protest Donald Trump’s presidency.

The campaign, called #ShiaShowUp, hopes to capture the attention of the actor/performance artist and pull him to the festival, which will take place February 23-25. Julia Claire Wallace, co-founder/director of Experimental Action, told Houstonia magazine, “The interaction between celebrity and art has always been fascinating to me, so this conceptual marketing campaign is a sincere effort to bring Shia LaBeouf to Houston.”

At the end of the letter is this comment: “P.S. James Franco, if you happen to read this, just know that we could be persuaded to feature your performance art work as well.”

how sad that people consider this performance art…..its annoying and self indulgent, plain and simple. He obviously considers himself above the rest of us therefore he allows himself to get into someones face and shout in their ear. At some point this becomes dangerous and is in itself a violent act. Nothing but a petulant adolescent.

Classic liberal emotional immature baby. Repeating the same dumb phrase thousands of times doesn’t do anything except make you crazy…..whoops too late.