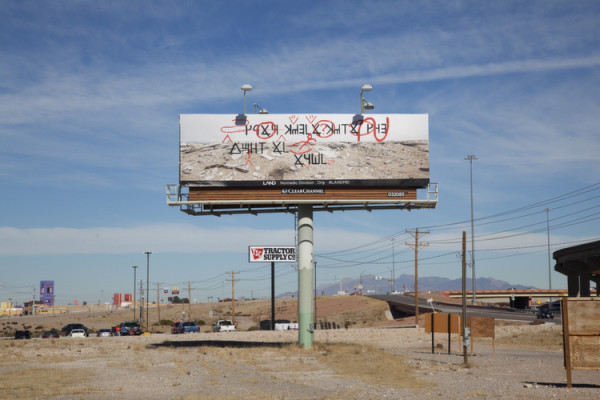 One section of the coast-to-coast Los Angeles Nomadic Division (LAND) series, called the Manifest Destiny Billboard Project, has struck fear in the heart of local residents. On a stretch of Interstate 10 along the New Mexico side of the NM-Texas border are 10 billboards by Daniel R. Small, and the Greek/Hebrew-derived text running across them, though actually a variation of the Ten Commandments (and an editor’s proofreading markups of it), has caused suspicion among those on the ground around Las Cruces.

Via Hyperallergic and the Las Cruces Sun News, reactions have been along the lines of: “I was beginning to wonder if it was some kind of threat or warning. You never know, we’re close to the border and you think that ISIS or some other subversives might be trying to get at us.”

Comments in the Sun News and on its Facebook page are similarly marked by mistrust, about terrorism in particular: you can read more here. To be fair, some of the nice photos of the billboards do evoke, for this sci-fi buff, some Area 51/Close Encounters mystery. To each his own.