Buildering: Misbehaving the City at the Blaffer Art Museum in Houston is an interesting show with possibly the worst title ever. “Buildering” derives from the rock climbing term “bouldering” and refers to climbing the buildings and features of the urban environment the same way one might scale mountains and boulders in nature. The “misbehaving the city” subtitle reads like some academic tool’s notion of being clever, but you can’t hold the moronic title against the work. The show curator Steven Matijcio of Contemporary Arts Center Cincinnati has chosen is filled with provocative selections. 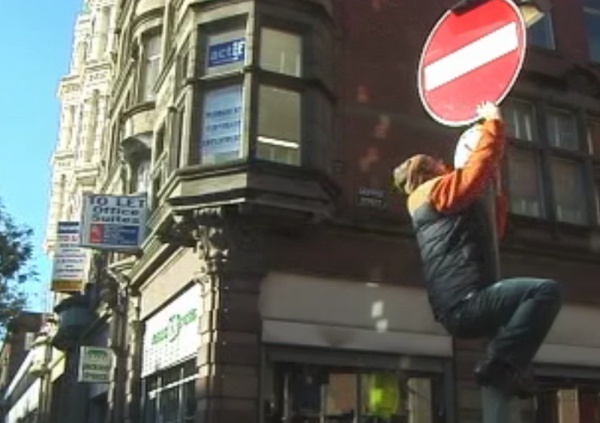 At the heart of many works in the show is an impulse to experience and investigate urban environments the same way one might a natural environment. Getting a Feel for the Place, Lee Walton’s 2000 video, presents a series of clips in which the artist moves through a city, exploring its tactile elements. We see him caressing the stone pediment over a basement window or patting his hands in a puddle of water in which a leaf and a cigarette butt float. He runs his hands over the smooth steel curves of a bicycle rack, he even runs his hands over some of the inhabitants as if trying to acquaint himself with some alien life form. He’s approaching the city like some heretofore-unknown wilderness.

In another video work, Making Changes (Reykjavik, Iceland), 2005 – present (ongoing) Walton moves barricades, unprops doors, rearranges store street displays and unblocks a giant steel cable reel so it rolls into the street. All of these actions are executed with the nonchalance and unconcern of someone throwing rocks in a stream or snapping off a branch in a forest. For the viewer of both of Walton’s, videos there is also the discomfort of watching someone doing something weird in public, violating our perceived rules for public and personal space. 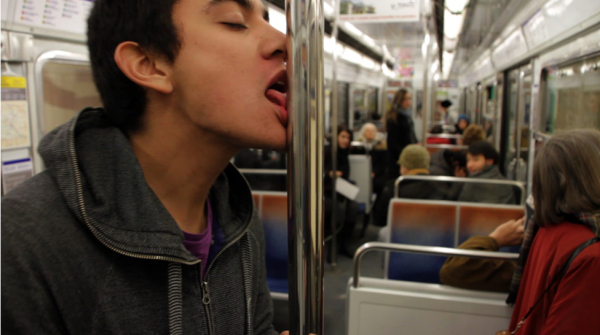 Generally, after clasping the pole of a subway car, most people avoid touching their eyes, nose or mouth. Ivan Argote, however, fearlessly turns the chrome poll of a Paris subway car into a love object in his video Altruisme, 2011. In a tight shot, we see Argote walk into the car and, with a furtive look, begin to lick and kiss the pole. He’s totally making out with it with a focused eroticism that makes you feel like you walked in on somebody. Germaphobes will likely find his oral contact with the bacteria (and likely the DNA) of thousands of his fellow Parisians particularly horrifying. Argote, a Columbian artist living in France, isn’t just content to just take in the sights. His determined intimacy with something touched by so many random persons is disconcerting, funny and oddly poignant. 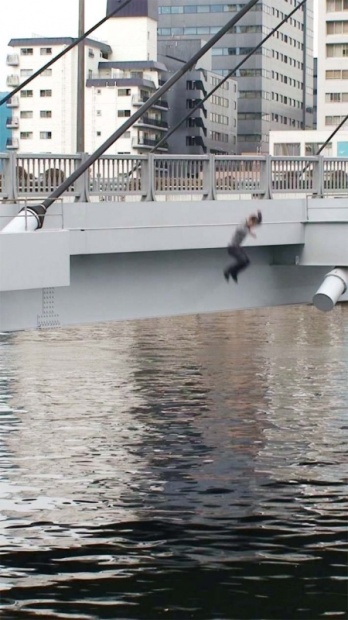 Sebastian Stumpf performs a series of urban stunts for video so quickly and so deftly that any passerby might doubt their eyes. (And as in Walton and Aragote’s work, you wonder how it was filmed. Was there a cameraman? Was there a lone tripod? Was there someone to make sure the camera didn’t get ripped off?) In Underground Garages, 2008, there are a lot of static shots of garage doors, briefly interrupted by a car entering or exiting. Just before the door closes again, the artist runs up and rolls underneath in the nick of time. At first you ask yourself if that really just happened, then you are left to wonder what happens once he is inside. Is he on a secret mission, is he accosted by security guards, is he hotwiring cars? He performs another disquieting action in Bridges, 2011, a series of video clips in which he strolls along different bridges and then effortlessly vaults over the railings into the water. He never comes up within camera range. He repeatedly disappears, from bridge after bridge always leaving you to wonder what happened to him and whether anyone noticed. 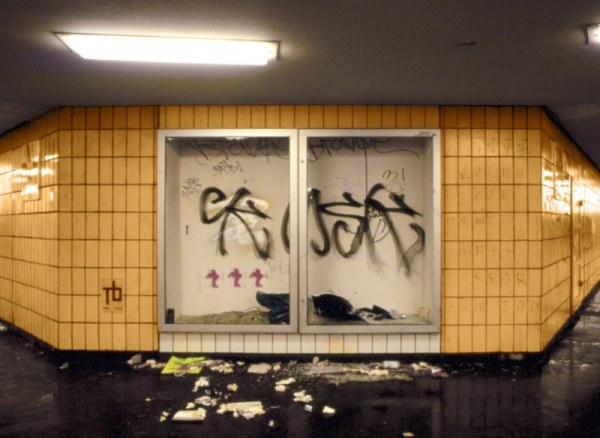 And you wonder how many people noticed Etienne Boulanger’s activities during the two years he spent in Berlin trying, like about every other freakin’ artist, to live without paying rent. He found 965 spaces without clear ownership and out of this discovered 40 crevices that would accommodate him. The Blaffer presents the drawings charting these sites. Boulanger constructed shelters in the gaps between buildings or in the space behind a display window in the subway. (You get a fuller sense of Boulanger’s work on his website with work like the 2007 single room hotel, a fully functioning free-standing hotel room he created in Berlin – camouflaged on all four sides by billboards.) In the video Shelters, 2001-2003, night vision video shows Boulanger using foam sealant to close up the cracks in a makeshift wall before tucking himself into bed.

It’s an interesting problem to create a discreet shelter in an urban environment. Anyone stuck overnight in an airport or a train station has addressed the problem of finding a private place to sleep in the midst of a vast public space. But there is also something really annoying about the project. Homeless people all over the world face this problem every day as a matter of survival, a state of existence with no end in sight. Boulanger seems like a slumming dilettante. The French artist (who died in New York in 2008 from a congenital heart condition) also appears to be a white kid sporting dreadlocks. There is an unacknowledged element of white male privilege in this work – and in work like Walton and Stumpf’s. What would have happened to these artists and how would their urban escapades been perceived were they executed by black artists? How many women could have executed Boulanger’s project without incident? What would have been the added difficulties of Boulanger’s shelter project if he were dark skinned with dreadlocks? 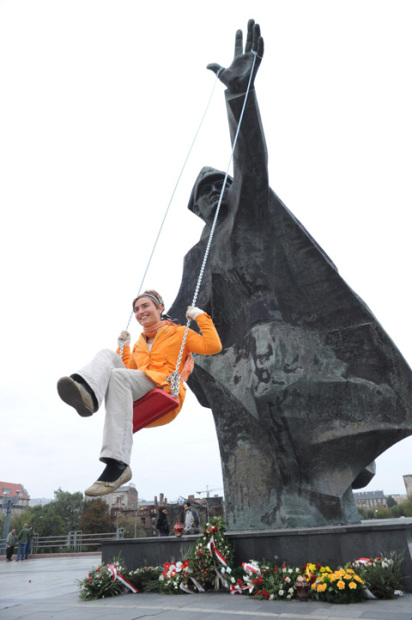 Other works in “Buildering” focus on the exuberantly absurd. The video of Kamila Szejnoch’s Carousel Slide Swing project in Warsaw in which the artist hung a giant swing from the arm of a Soviet monumental statue of Lenin is hysterical. We see joyful participants swinging with abandon before the police shut everything down. It’s a delightful repurposing of a stolid, oppressive leftover from the Soviet era, one of several monuments to alleged “Polish-Soviet Brotherhood.” That the people in the swing also appear to be dangling from puppet strings held by Lenin’s massive hand adds a sardonic edge to the work.

The domestic pranks of the collaborative duo Bestué-Vives (David Bestué and Marc Vives) take this playful attitude into the domestic sphere. Using Bestué’s fairly cruddy Barcelona apartment as the setting, the artists’ 2005 video Actions at Home, presents dozens of humorously inventive scenarios that range from the surreal to the slapstick. A kitchen sink waterfall is created from dishes and kitchenware stacked up and extended from the faucet onto the floor. It’s a strangely charming construction. (Imagine a more casual, underachiever version of Fischli and Weiss’s The Way Things Go.) Yogurt falls from the refrigerator with a splat but neatly fills in the tile grout. A vase breaks when you open the door. One scene listed as “Cat Hair, No Cat” shows one of the artists sweeping comically large fluffs of fur from a loveseat. In another vignette, a fake wall outlet cast from butter is adhered to the kitchen backsplash – one of the artists uses a knife to scrape the butter from the wall and onto a piece of toast. You suddenly realize how unimaginative your own home life is. Why don’t we all entertain ourselves with such absurdities? Those of you with young children may suddenly feel that in stopping your toddler from filling the toilet bowl with bath toys, you have crushed his creativity and rendered domestic life stale and boring – albeit free from consequent sewage backflow.

In the most successful of the works in “Buildering,” there is a demand to cast aside our assumed notions of what is proper and what is possible. There is a longing for a less constrained world. Looking at our own unconscious choices and actions in the critical light cast by these artists, the quotidian and mundane suddenly become opportunities for amusement and adventure.

Buildering: Misbehaving the City runs through December 6 at the Blaffer Art Museum.