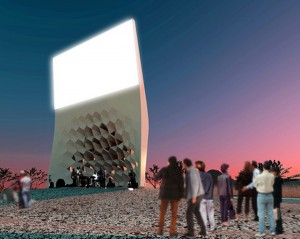 By SARAH M. VASQUEZ of the Big Bend Sentinel (used by permission)

MARFA – Ballroom Marfa’s much-anticipated drive-in theater project has been “indefinitely deferred,” or postponed. In a letter to the editor published in this week’s newspaper, Ballroom co-founders Fairfax Dorn and Virginia Lebermann state that its board of trustees voted this decision because they believe the project has outgrown its original version.

“In its current proposed state, the Drive-In project will require significant fundraising efforts that could compromise the level of innovative and community-minded programming that has been Ballroom Marfa’s priority since 2003,” the co-founders of the art-music-letter said.

Ballroom Marfa proposed the concept to provide space for artists to perform or host outside events, whether it was music, film, or multi-media, for the community at Vizcaino Park. The project was initially projected to cost $4.5 million, which included design by architects Michael Meredith and Hilary Sample of MOS, development and construction costs. Ballroom also received a matching grant from the National Endowment for the Arts of $250,000 through the Our Town program.

Presidio County also went into a public-private partnership with Ballroom Marfa in 2012 that included a 99-year lease of 8.15 acres of the 20-acre park.

The letter states that Ballroom will now focus on events that the Drive-In would have offered in existing spaces in town.

On Tuesday, Presidio County commissioners adopted a motion requiring Ballroom to respond within 30 days to some nonperformance issues in the agreement. County Judge Paul Hunt added the agenda item because he said he felt Ballroom was struggling to comply with the some of the terms.

“It’s one thing to plan. It’s another to build and execute,” said Hunt.

“In the contract that we have with them, the real value that the county negotiated for was that in return for access in that public space, the programming would be developed and managed to incorporate public participation on an ongoing basis,” said Hunt.

Hunt said Ballroom had been focusing on fundraising for the construction phase, so they were not fulfilling their obligation.

“I think fundamentally they concentrated on parts of the contract where they said they were going to build the big outdoor theater and they overlooked the development of the public partnership side,” said Hunt.

Commissioner Eloy Aranda asked if Ballroom did any maintenance to the park, which Commissioner Buddy Knight responded with an “absolutely not.”

Dorn and Lebermann stated in the letter that the property for the Drive-in included the undeveloped softball field. The majority of the park, which includes the stage and baseball field, are managed by the county.

Hunt said this situation breaks his heart, because he viewed the public-private partnership as a way to build a bridge between the different communities in Marfa. Hunt said he gave Ballroom informal notice in the past, but now he wants to give them formal notice, which is allowed in the contract. He also recommended tabling the issue until the next meeting at the request from Ballroom so they have time to prepare a response.

However, Commissioner Jim White III made the motion to give Ballroom 30 days to respond.

Ballroom Marfa Drive-in Project Manager Melissa McDonnell Lujan, who presented the idea to the county two years ago, declined to comment, as she hasn’t received the formal communication from the county, and referenced the letter from Dorn and Lebermann. She did add that she understands Presidio County wants to discuss some issues regarding the lease and that it was on the agenda.

Capitalist Consumption: the Institute for New Feeling at...