This iconic and storied Houston art space ain’t going out without a bang.

Early last week, rumors began to spread that Rice University was planning to demolish its Martel Center building, originally the Rice Museum. Now it is officially confirmed, and will likely happen very soon. 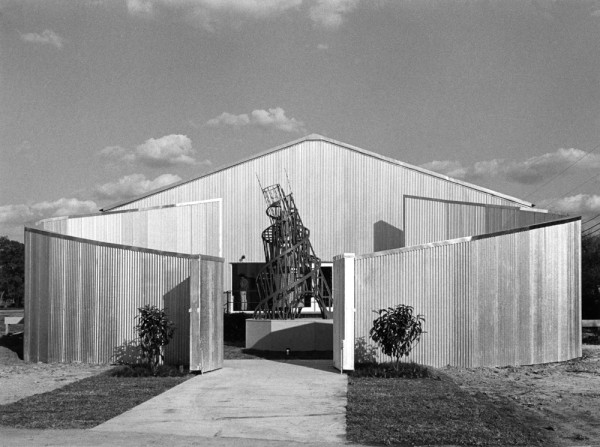 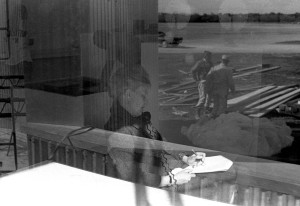 John and Dominique de Menil founded the Institute for the Arts at Rice in 1969 and commissioned two corrugated metal buildings for the school’s campus–the first to house the Rice Museum (affectionately dubbed “Art Barn”), and another for the Rice Media Center (“Son of Art Barn”). The innovative style of the buildings inspired Houston’s “tin house” movement starting in the West End neighborhood in the ‘70s. With the direction and financial backing of the de Menils for their first dozen years, the buildings housed an invaluable part of Houston’s cultural history. The Rice Museum brought an amazing amount of artists and exhibitions to the city, including such early shows as The Machine as Seen at the End of the Mechanical Age and Andy Warhol’s Raid the Icebox. (During the latter, Warhol helped plant the tree in the front of the building.) 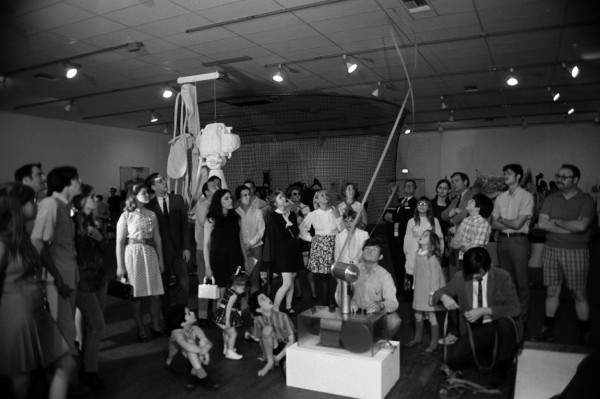 Opening of the exhibition “The Machine as Seen at the End of the Mechanical Age,” 1970.

Now, with little warning, the “Art Barn” is being grazed in the coming weeks. This morning, GT has confirmed the demolition plans with the University’s Office of Public Affairs. “The old structure made of corrugated galvanized sheet iron has held up well since it opened in 1969, but it is now in very poor condition. It was never intended to be a permanent building on the campus, and the cost to restore the structure for any possible use, and maintain it, is prohibitive. The university plans to plant grass on that site. The tree that was planted by Andy Warhol in front of the building will remain intact.” There are no details as to the specific date of its demolition, but a permit application has been filed, its utilities have been shut off, and a construction fence is going up next week.

Some in the art, architecture, and academic communities have been shocked and/or saddened about the decision to demolish an iconic building that represents Rice’s connections with the de Menils, countless artists, and regional architecture. I spoke with architectural historian and long-time lecturer at the Rice School of Architecture Stephen Fox, who emphasized both its art historical importance and architectural significance as a progenitor of a widely recognized architectural movement. “Designed by Houston architects Howard Barnstone and Eugene Aubry, it was faced with corrugated galvanized sheet iron, which was used to materialize its identity as a workshop for art, rather than a pristine gallery. Along with its architectural companion, the adjoining Rice Media Center, the Art Barn introduced the use of sheets of metal as an architectural finish material to Houston.” Along with others, Fox wishes the building would stay. “The Art Barn is a building of exceptional cultural value to Rice University and Houston. It should be preserved and used as a studio for art instruction.”

Many artists and alumni are personally tied to the space, seeing the building as an important reminder of a time when Rice was more connected with and vital to the city’s cultural life. Others see its end as inevitable. But most don’t know anything about this development.

Thankfully, folks from the Visual and Dramatic Arts Department have organized a last blast event to be held in the courtyard between the Media Center and the Art Barn this Sunday, February 23 (6pm until after dark). This pre-demolition art happening, called Barnstorming and described as “a celebratory gathering to honor the rich history of something more than a building,” will feature films, live performances, and art making. People are encouraged to bring picnics, musical instruments, art/art supplies, kids, pets, whatever. However you feel about the Art Barn’s being put to pasture, this is a final chance to see it, party with it, and share a lively goodbye.

We invite any of you who have fond memories of the space over its 45 year history to comment below.

I was “raised” at Rice University’s Media Center (studying photography) and played openings at the Rice Museum (as a Shepherd School Student). It is not surprising to me that the University would choose to demolish the Art Barn instead of honoring its presence with renovation. This decision mirrors their epic lack of interest and support of art at the University in favor of departments more financially useful to them. The University has built so many buildings over the past 25-30 years for residential colleges, science, engineering, political science, music, and multiple edifices for athletics of all sorts, providing interior and exterior gaming, and yet not a single structure for the visual arts. Perhaps the school motto should be altered at this point officially from “Arts, Letters, and Sciences” to “Athletics, Letters, and Sciences”.

When the Menil Foundation was considering demolishing the De Menil home following the death of Mrs. De Menil, I wrote letters to their board requesting them to review their decision which, I think, encouraged them to reassess their choice. It is not just a building, but an historical marker of importance for the city of Houston: a hallowed site which represents a turning point of great significance.

The Art Barn is similarly important to Rice University and the City of Houston. It represents a time which will, very shortly, only exist in the memory of those of us who knew Mrs. De Menil and experienced a profound excitement in the cultural life of a city. This city whose preoccupation with business was temporarily rendered breathless by the thought and vision embraced by a few rogue individuals who were bound in time and place. I feel lucky to have been one of those individuals. It is an interesting choice to leave the tree, planted by a “certified” artist, when what was truly significant were the seedlings.

I have wonderful memories of the opening exhibit at Rice, spending the summer running through the maze that was part of the show. Rice was the neighborhood playground, it looks like the surrounding neighborhoods and Rice have changed significantly and in many ways and both hood and university of lost sight of their past.

Rice President David Leebron’s comments at the groundbreaking of the new Anderson-Clarke Center, directly across from the former Barn and Media Center:

“This will really anchor a part of the campus that represents in very strong physical terms the enduring commitment that Rice University has not just the people of Houston but to the spirit of Houston, a commitment of a vision to learning and sophistication of the arts and other endeavors.”

It was no accident that the Institute for the Arts and Media Center were sited at the very fringe of the campus in 1969. They were metaphorically once-removed from the otherwise very uptight university that Rice remains today.

Is anyone even aware that these two buildings were each constructed in five discreet segments, designed along fault lines so that they could be separated and fairly easily relocated? That’s partly the reason for the stabilizing cable system. Knowing that they were pushing the envelope of Rice acceptance, the de Menils were literally ready to pull up stakes at a moments notice.

Maybe the Art Guys-married tree could be planted there, near Warhol’s tree.
Maybe the start of a grove of art trees and/or trees for trees’ sake, ’til the next need comes along.

Really, in Houston, in those days, the Barn and the Media Center were more revolutionary than any Frank Gehry in L.A is today. They even spawned the CAM, which took the design and show ethos and ran.

I was 11 when my parents took us to the Machines show. I still remember the beating heart piece and shooting baskets into Le Rotozaza. The Barn’s exhibitions were such a radical departure from the classics and Frederic Remington (whom, don’t get me wrong, I love). They made Houston seem part of a vanguard.

In college I loved the intensely satisfying Media Center film series. Attending Heavily McEvilley’s Film History class I always found it difficult to get out to the Red Bluff Drive-In to catch 400 Blows or Pather Panchali, so having them play on campus was terrific.

Given their contribution to the cultural life of Houston, anything the DeMenils touched oughtta be honored.

I went to the event this past sunday, here is a blog post dedicated to remembering the Art Barn:
http://panchoandleftey.com/2014/02/26/goodbye-art-barn-rice-media-center/
Oh Houston and it’s ever present demolition and change.
Dena

The Contemporary Arts Association was founded in 1948, and John de Menil was a board member until 1958. Maybe that influence ran in another direction.

“In that sense, we carry forward, I think, the spirit of the founders of our media center, the de Menils. What I remember best was that Jean de Menil and you and I loved Godard, that he allowed all three of us to pursue a hyper-reality, our surrealisms–yours a crazy concoction of fact and fiction–and that, together, the three of us made and manifested a passion, and that these became our TESTAMENT.” –Gerald O’Grady, from “Tribute to James Blue 1930-1980.”
Please visit on Facebook: Remembering Documentary Filmmaker James Blue (1930-1980).