Intersections at UNT on the Square

In downtown Denton, UNT’s satellite gallery is showing works from Professor Robert Jessup’s graduate painting class. The theme of the exhibition, “Intersections,” pairs up students for collaborative works that hang alongside examples of their own individual work, promising the chance to see the creative exchanges and experimentation that go on in a rigorous MFA studio class.

Once every week or so, the class is barricaded together in a critique room to group-think, solve each others’ problems, and basically think each others’ thoughts. So, aside from the conscious collaboration going on, there’s also much evidence of the unconscious ways that ideas and pictorial strategies spread in this intense, creative environment. The most sincere collaborations often happen telepathically. Ideas can spread like germs. They can hide in the folds of your clothing, slip under doors and move through walls. And in this show they’re captured, rendered visible. 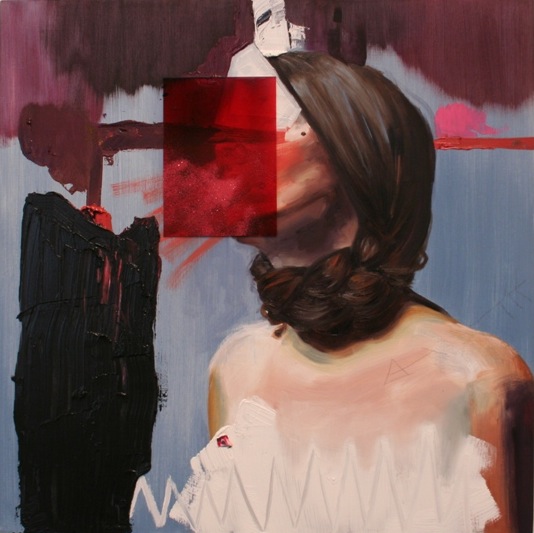 Color choices and surfaces seem to be contagious. Similar blues, pinks and oranges sprinkled on white grounds hold a steady note through much of the show. Another theme that emerges is the way many of the artists frame abstraction/figuration in their work. Shayne Murphy, Justin Strickland, Kai Peter Martin and Rachel Fischer all deal with figures that break down into abstractions in some way or share the surface with geometric and gestural environments. It’s tempting to trace their marks and smudges to an original source, but that would be useless. What matters is how they’re used in the context created for them. 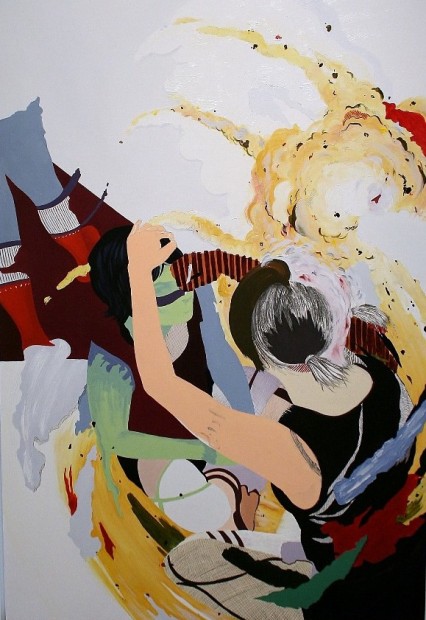 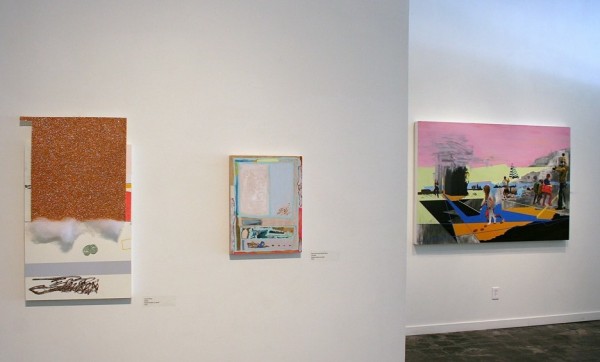 The conscious collaborations are like relationships in that they rely on “chemistry,” the kind of physical connection that lies beneath rational thought. Some “jive” better than others, and some of the artists seem to be more in the sharing spirit. Cassie Phan is half of a handful of teams, and takes each opportunity in a different direction. Phan’s own piece, Callus, is a small mixed-media collage that showcases a gaudy and surprising choice of materials. Fluorescent pink and orange layered on a clean white ground, with a tuft of pillow stuffing, and lots of glitter. Lurking behind the flashy, eye-gouging color is an unpredictable orchestration of formal decisions. What makes Phan such a good partner is that she doesn’t use every tool every time. She knows when to pack the glitter gun and when to leave it at home. 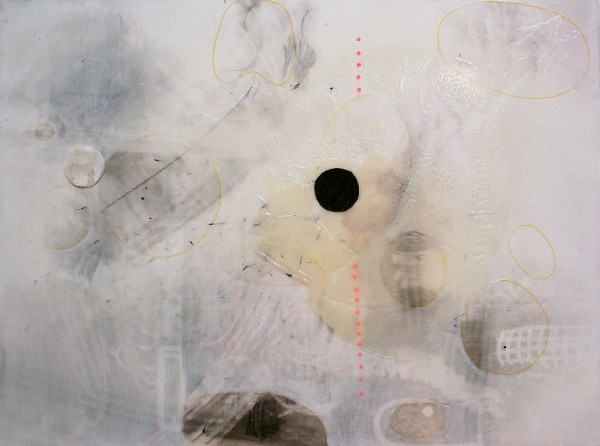 Michelle Thomas and Cassie Phan, Dip it in a Puddle

Phan’s piece with Michelle Thomas, Dip it in a Puddle, shows restraint with both color and materials. It’s an exercise in “listening” to the materials and to each other. The two artists build up layers of waxy medium that collects off-handed marks and squiggles, erasures and smudges. It’s a smart and playful piece that takes both artists out of their home territory and documents their interaction.

Kai Peter Martin seems to be another universal donor, partnering up successfully with a number of artists. His two large works on paper, Fault-Tolerant Coherence and Container Fault are sprawling scenes of figures, rocks, trees, clouds and furniture, constructed out of graphite smudges, bits of color and brushy ink marks that all teeter on the edge of description. The overall effect is an unplanned, chaotic universe that easily absorbs other artists’ imagery. 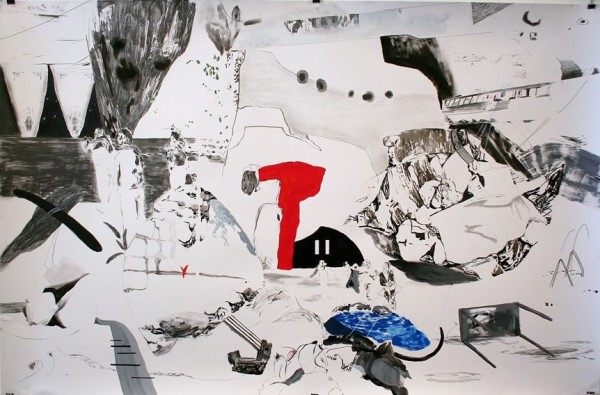 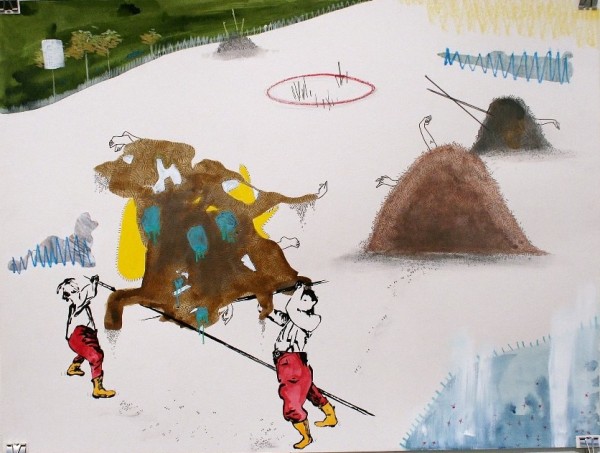 If you sit with the show for a while, all of the similarities between artists’ works fall away. Their color choices and even their subject matter are influenced by their shared circumstances. But the artists all have their own unique concerns and values that will lead them to very different conclusions. They just happen to be in the crucible that is graduate school, engaged in a conversation that frames their thinking, and here, displaying a cross-section of this conversation and offering a glimpse into collaborative and creative processes.

Intersections: Collaborative Inquiries in Painting runs from June 13th to July 17th at UNT on the Square in Denton, Texas. 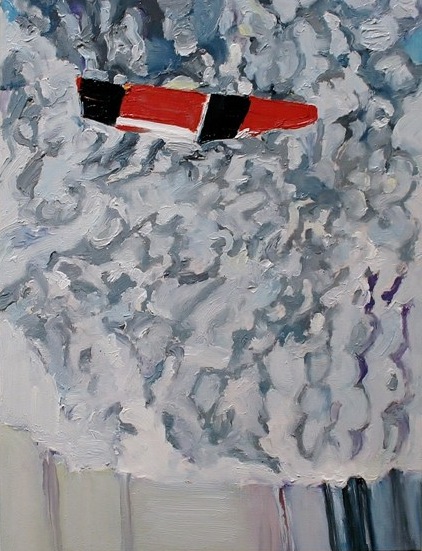 Michael Blair is an artist and educator who received his MFA from the University of North Texas.

I applaude Justin Strickland and Shayne Murphy, Untitled piece. Would love to get in touch with this artist!