James Turrell’s skyspace at the Live Oak Friends Meeting House is one of the most moving artworks I have ever seen. When visitors look up at a rectangular opening in the ceiling at sunset, the sky slowly shifts from light to dark blue, then blackens. Small, faint stars pop into view one at a time in a scattered pattern as the stunning finale to a natural light show. Filled with wonder at watching stars being born into the night, I remember thinking after my first visit that I would never take a sunset for granted again. Turrell is at his most compelling in this all-encompassing space, where he invites viewers to pause, focus on light, and feel themselves seeing from the inside.

The Turrell retrospective at The Museum of Fine Arts, Houston contextualizes stand-alone spaces like the meeting house by showing how they are part of the artist’s ever-evolving manipulation of natural and artificial light to dramatic effect. Placed perfectly on the second floor of the Law Building, two long hallways at either end of the curved gallery open into six dark rooms, each with their own light installation and two additional spaces at the center of the exhibition, one dark and the other bright. Soft, natural light filters through translucent curtains hang on the Mies van der Rohe glass and steel exterior wall, allowing eyes to readjust between rooms, beautifully highlighting the large scale works on paper also on view. Forty-six years of Turrell’s work are represented—from early bright projections, like those that were part of his first solo exhibition in 1967 at the Pasadena Art Museum, to an example of the artist’s most recent experiments with LED lights, Aurora B: Tall Glass (2010). 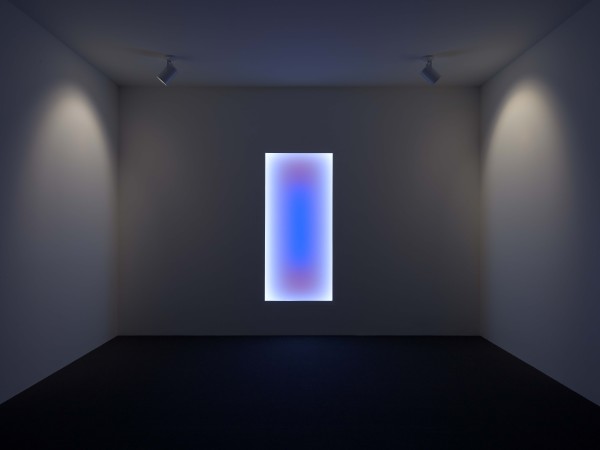 Aurora B: Tall Glass, 2010, LED, The Museum of Fine Arts, Houston, gift of the estate of Isabel B. Wilson in memory of Peter C. Marzio. © James Turrell / Photograph by Thomas DuBrock

The exhilaration of a Turrell installation can be addictive, and the retrospective promises the ultimate fix of awe-inspiring harmony between vision, emotion, and light. But seeing many of the artist’s works gathered together in one place had the surprising effect of diminishing rather than enhancing the force of the artworks. The cumulative effect of the retrospective does not leave as powerful of a visual impression as the individual installations. The whole is not equal to the sum of its parts, which is a challenge not only for the visitor’s experience but also the common assumption that perception is all that there is to a Turrell.

A fundamental misstep at the MFAH is the sequencing of the rooms, which runs counter to the momentum of the artist’s practice. The chronological range of artworks should allow visitors to see Turrell building on basic, earlier works to create complex, immersive spaces as he gained access to more effective technologies and greater resources. Yet, the main entrance to the exhibition is located next to the artist’s most recent work, and the tendency is to move to the right upon entry, away from the attendants passing out tickets and into the artist’s work with LED lights. Starting with the earliest artwork would mean walking around the cart at the entrance, and along the railing to the far end of the gallery, where Turrell’s Acro (Green): Corner Projection is installed. The straightforward construction of this 1968 installation, using only a projector, board with a cut out rectangle, and screen built into the bottom corner of the room, is a good primer for the basic components of Turrell’s work—bulbs, frames, and surfaces that refract and/or diffuse the light. 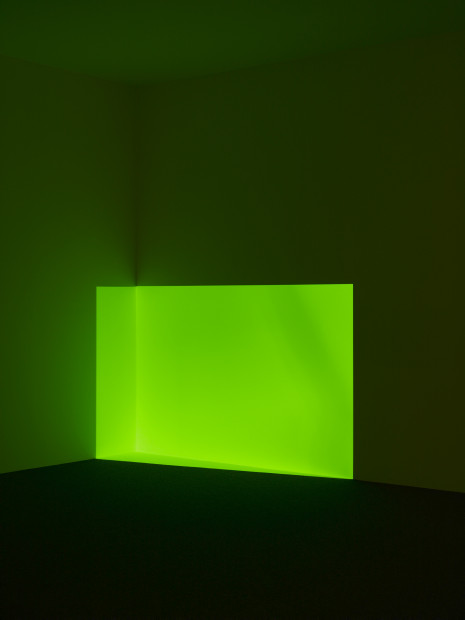 Although there is a timed entry to the exhibition requiring a reservation, the good news is that there is not a mandated exit time. Spend as long as you like in the rooms, which all reward extended viewing. From Acro (Green), it makes the most sense to move roughly clockwise around the semi-circular gallery, leaving the bright central space for last. Often with Turrell’s work, I find the light so entrancing that I imagine myself crawling inside it and living in the glow. End Around: Ganzfeld (2006), the bright room at the middle of the exhibition, allows one to do just that and thus makes for a fitting culmination to the exhibition. A set of stairs leads up to a light space that gradually engulfs the viewer as she walks deeper into the room. “Ganzfeld” refers to an optical condition where total submersion in a single color causes one to lose one’s bearings, as in a snowstorm or when a pilot flies straight up and can only see sky. To get that effect in Turrell’s installation, stand in the middle of the room as close to the precipice as the guards will allow. From there, one is fully within the light. It takes about twenty minutes for the slow shifts of color to cycle through, and even though it meant that a crowd built up outside since only limited numbers of visitors are allowed in the space at one time, I am glad that I stayed for the full run. I felt transformed by a journey taken from a single stance as my mood soaked in and responded to the colors in turn. 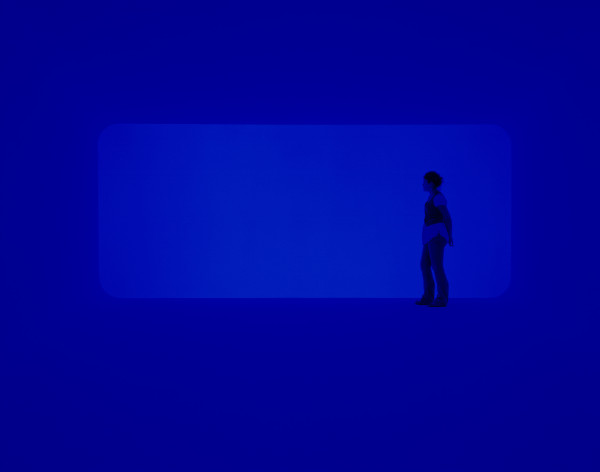 End Around: Ganzfeld, 2006, neon and fluorescent light, (2007 installation at Pomona College Museum of Art, Claremont, California). The Museum of Fine Arts, Houston, gift of the estate of Isabel B. Wilson in memory of Peter C. Marzio. © James Turrell / Photograph by Florian Holzherr

The unintended consequence of the optical intensity of works like End Around is that his small scale projections and tall glasses fall flat in comparison. An understated work like the linear Rondo (Blue) (1969) might be stunning on its own, but with other more immersive spaces close at hand, it seems like merely a teaser or sketch for the larger works. Turrell’s tendency to outdo himself makes it hard to see each installation unto itself. His spaces are at their worst when measured against his greatest achievements, and his ambition knows no end. For forty years, he has been building Roden Crater in the Arizona desert, which promises to be his ultimate accomplishment. A cryptic but elegant series of prints and drawings show his plans for the massive, extinct volcano and offer a glimpse of what he will achieve. Because Turrell’s artwork does not work unless it can be experienced and the crater is still not finished, one is left wanting more. 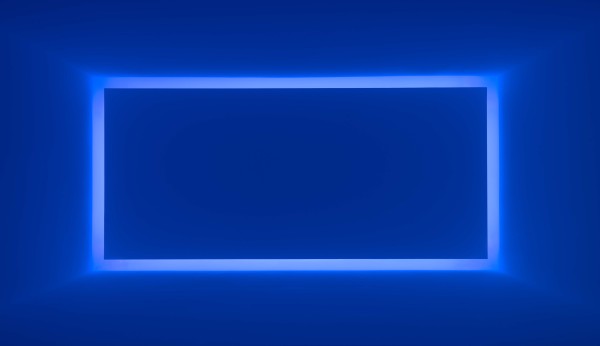 Rondo (Blue), from the series Shallow Spaces, 1969, neon light. The Museum of Fine Arts, Houston, gift of the estate of Isabel B. Wilson in memory of Peter C. Marzio. © James Turrell

In addition to the frustration of its incomplete state, his crater project also brings out the Marxist in me. Looking in the catalogue and retrospective at his plans, drawings, and exact specifications for construction of the crater, as well as his other installations, I cannot help but think about the massive resources required to fabricate such spectacles. When Turrell invites a viewer to directly encounter light through his installations, he also asks that she ignore all the labor, funding, and fine materials that were necessary to construct that experience. The retrospective, however, made me all too aware of the artist’s hand at work. Although this awareness undid the illusion to a certain extent, it did make for a more honest encounter with Turrell’s work. 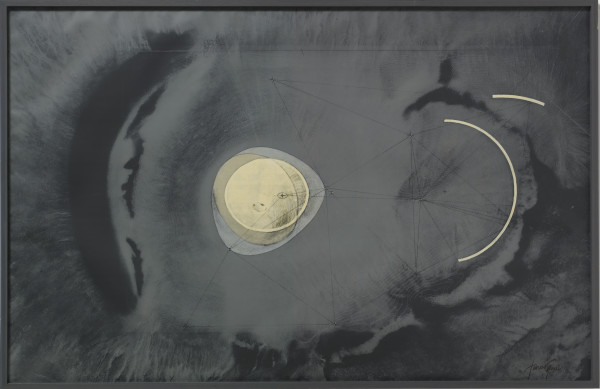 An aspect of Turrell’s work that started to make me uneasy is his extreme focus on viewing, which tends to reduce a body to eyes and brain. Carpet, cloth to go over shoes, and nearly silent machinery reduce the sound in the rooms; guards discourage any impulse to touch; and the only smells are of fresh carpet and paint (at least at the opening). The experience of one Turrell after another like this drove home how radically I was letting go of my other senses in order to experience his work. The alienation from any physicality outside of my eyes started to disturb me. In this respect, I gained a newfound appreciation for the namesake of the exhibition, the tunnel that runs between the Law and Beck buildings at the MFAH. I seem to always strike up a conversation there and enjoy the change of perspective when walking from one end to the other. I now understand how exceptionally social and physically present I feel in that place. 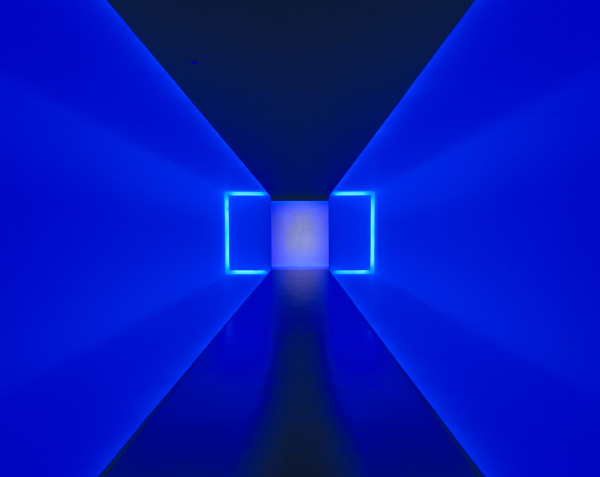 The Light Inside, 1999, neon and ambient light. The Museum of Fine Arts, Houston, Museum commission, gift of Isabel B. and Wallace S. Wilson. © James Turrell

The wonder of Turrell’s installations is founded ironically on a sort of disillusionment. In the best of his spaces, one marvels at a light we typically take for granted. This simple revelation is more incredible than any illusion could ever be. The sublime sensations in the artist’s retrospective may not add up to something more powerful than any individual work, but maybe that is just the sort of inversion of expectations that can give his works a meaning and context beyond pure perception.

Rachel Hooper is pursuing a doctorate in art history at Rice University and writes a blog for Glasstire.

I don’t know if you got a special tour, but both times I have been there, the guards pretty much ruin “End Around”, making any of the work without a guard in the middle of the piece function a lot better.

Ok, so it’s not just me. The first thing I noticed as we passed the arrowed sign directing us to the Terrell exhibit, was that, as we entered, we crossed the path of people exiting the “first” room as we moved towards the entrance. As we did this a second time, I asked out loud, “Why isn’t the first door an entrance…”

Then as we approached the first set of paintings I asked, “Why are they putting the textual context of these at the END of the series.” (This happens multiple times.)

When we got to the other “end”, and the signage referred to Turrell’s getting his pilot license at age 16 (making the chronological arrangement more obvious), my accompanying partner jokingly asked, “Is he going to come out of the womb next?” To which I replied, “Yea his mom was, like, step into the light, James Turrell!” And then asked the guard if other people are complaining they are having us enter on the wrong end and see the show backwards. She said no, you can see it in any order you want. And as we exited we looked at the signage and were really disappointed they were directing crowds to the wrong entrance.

A masterful and literally awe-inspiring, must-see show. But I cannot emphasize enough, IGNORE THE ENTRANCE SIGN and enter at the other end of the exhibition