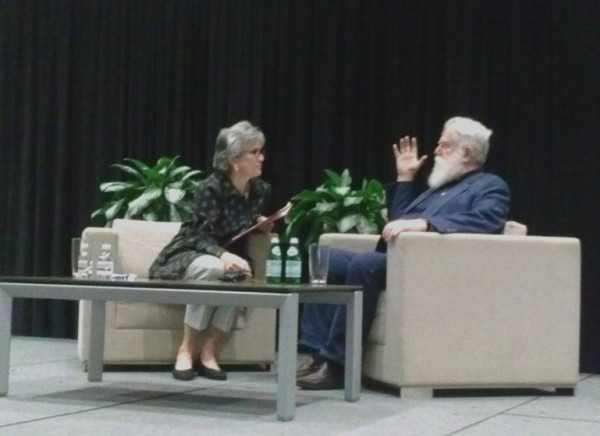 James Turrell and Lynn Herbert discuss Turrell’s newest work on Friday at the University of Texas.

On Friday afternoon, October 18, James Turrell, accompanied by former CAMH Senior Curator Lynn M. Herbert, spoke on his artistic career, his reason for going into cattle ranching work and the culmination of the newest Texas Skyspace: The Color Inside, located on the rooftop of the Student Activities Center at UT-Austin all while sipping a venti vanilla frappuccino with “James” streaked across the cup in wax pen.

Turrell stressed the importance of the student ownership of the piece, which was funded in part by activity fees every student must pay.  Turrell was complimentary to Herbert, who curated his 1998 exhibition at the CAMH, noting her early support and vision. Guided by Herbert, Turrell took the audience through his career, starting with discussions of his first studio and his realizations that light could be a medium with endless possibilities, neither “additive nor subtractive”.

What stood out is Turrell’s obsession with controlling the spaces he inhabits, as well as those he makes for others. He designs benches for his installations, he rearranges the earth for his exploits, and upon arriving, he immediately rearranged the staged furniture. 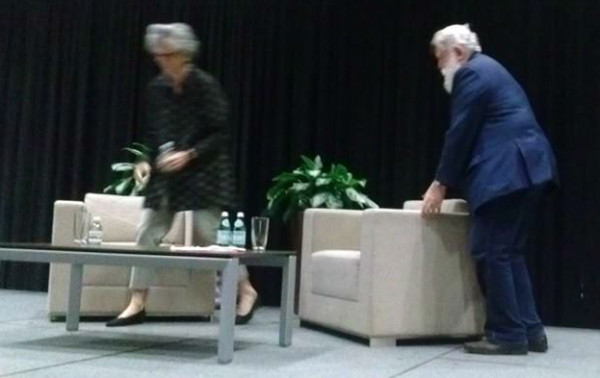 James Turrell cares about space. Upon arriving he immediately rearranges the staged furniture.

In Turrell’s view, making sacred space is a responsibility of the artist; he wants to make spaces for others to worship, to “engender awe.” He discussed how humans, like crustaceans, find spaces, fill them up, and move on. He equated the spaces we inhabit to the corporeal cave of the human soul.

The University setting seemed fitting. Though Turrell was not enrolled in college courses for long, he installed a skyspace in 2007, Dividing the Light, at his alma mater, Pomona College, in 2007, a culmination for the artist, who has seen 85 skyspaces opened around the world. “That may seem good,” he said, “but I’ve been an artist 48 years, I’ve got to have something done.”

When asked what advice he would give students who dream of making art and making money, Turrell weighed the commitment, the sacrifice, and gave a simple mantra for honest art making: “Don’t tell an unbelievable story.”

Turrell discussed his love of flight and antique planes. Turrell has restored antique planes to supplement his finances for many years; and he felt his artistic career had truly blossomed when he was equally represented in both Fine Art and Historical Aerospace museums across the country.

Turrell is known for his cattle-ranching, and talked about the relationships he cultivated with his own farming family through the development of his cattle ranch on the land which houses the Roden Crater: “My family thought I had finally come to my senses.”

Turrell charmed the crowd of art students, professors and other Turrell-groupies with sassy comments about the students strewn about the halls of the building where the talk was held and statements like, “I make money selling blue sky and colored air.”

To visit the skyspace you can make reservations  for the Sunrise or Sunset sequences up to three days in advance. 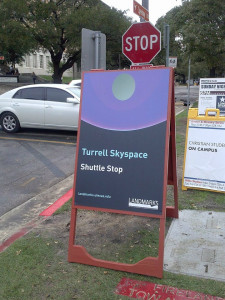