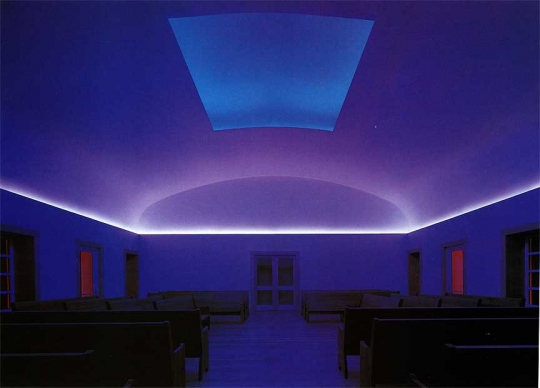 Since August 2013, when the Live Oak Friends Meeting House had to close its public viewings of James Turrell’s One Accord Skyscape due to water damage, no one has really had a chance to lament its absence. That was the same year that the Museum of Fine Arts, Houston (MFAH) hosted a huge Turrell retrospective and UT Austin opened The Color Inside Skyspace above its student activity center. And Houston’s Rice University had just debuted its Twilight Epiphany Skyspace the previous year.

But for Turrell lovers, there’s a special affection for Friends Meeting House piece. After the Contemporary Arts Museum Houston organized James Turrell: Spirit and Light in 1998, the MFAH commissioned The Light Inside, the light tunnel that connects its two museum buildings, which opened in 2000. Also in 2000, the Live Oak Friends Meeting House opened with its Skyscape.

Initially, the Friends were very suspicious of the entire project. A New York Times article at the time catches some cautious quotes from members, such as, “We have a testimony of simplicity. We have people who would have preferred to build a building of hay bales and corrugated fiberglass.” Here’s another from a later article: “In our meeting, we all share a common link—that there is a God. The language we use for that is ‘the inner light,’ But it is not physical light.” As self-proclaimed non-experts about art, the members held meetings with Turrell, who is also a Quaker, until they had an understanding of the project and gave the go-ahead.

Even the latest post on the Live Oak Friends Meeting Facebook page has some interesting quotation marks within its notice about the official reopening and its opportunities: “to talk with non-meeting ‘experts’ who will discuss James Turrell’s art and the place of our meeting house in that body of work….. for new or prospective docents to experience the art and for those new to our community to find out what the ‘Art’ is all about.

The Meeting House and Skyspace will now be open (weather permitting) every Friday evening, and on the first Sunday evening of the month, approximately 30 minutes before sunset for prayer, meditation, and viewing of the Skyspace. Private group viewings can be arranged by contacting the meeting scheduler at [email protected].