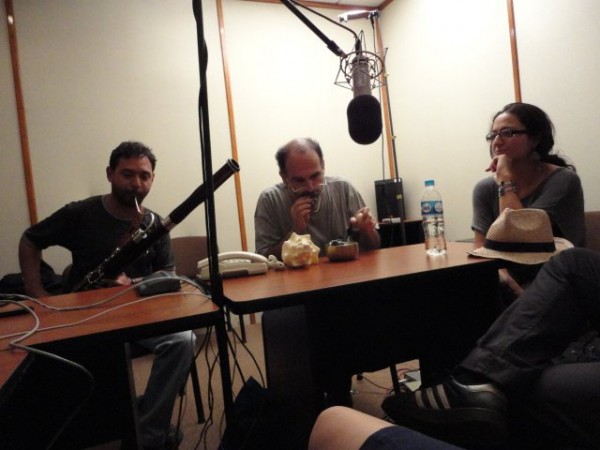 I was falling asleep slowly around 1:30 am when I heard the chime of a Facebook chat message.  I debated about just ignoring it, but my Facebook obsession kicked in and I decided to jump up and see who could possibly be messaging me so late.  It was Anjali Gupta writing to inform me that Sala Diaz in San Antonio was inaugurating a new residency program called Casa Chuck.  To inaugurate the residency, Mexico-City based curator, critic and lecturor Barbara Perea was invited to participate, and Anjali was right, I absolutely had to meet her.

There are just some people that are so cool, so talented, and so genuine that it’s hard to imagine how your paths hadn’t crossed prior, especially in this teeny tiny art world that we all live in.  I emailed Barbara, and after a few failed attempts (mostly on my part) we were finally able to sit for a strong cup of coffee and a rum coated pastry.  What I thought would be a quick meet up to become acquainted turned into an hour long conversation followed by a coffee purchase, a visit to a local museum, and an offer to house sit while she’s away for one month in the great state of Texas.

I do not tell a lie.  This girl is cool…and crazy smart.

Barbara is a curator, critic and lecturer.  Her interests have been based in emerging media, sound and video art.  Her resume is host of accolades and impressive projects including co-curator for the Mexican Pavilion at the 52nd Biennale de Venezia and is currently part of the curatorial team of Transitio MX.  Aside from all these incredible, groundbreaking projects, what struck me was Barbara’s genuine interest in San Antonio, in Texas, and her desire to integrate knowledge of Mexico City’s growing grass roots, artist run, and community based gallery scene with that of San Antonio.

As we sat on a giant couch in the back of my favorite coffee shop the bulk of our conversation turned to Barbara’s excitement about the curatorial residency at Casa Chuck in San Antonio, and her desire to be able to contribute something to the community in general, and in her words: “I’m excited about contributing to the art scene there.  I feel like it’s all coming together slowly, and I want to do research in sound art, and I think it’s slowly starting to come together toward a critical mass.  I want to make sure I can contribute something, so I want to put something together that I can leave there at the Casa.”

I wondered why sound art, there isn’t too much of it in San Antonio (not that I know of anyhow), but learned that Barbara was also researching alternative art spaces in Mexico City.  She spoke about these alternative, artist-run spaces with excitement “they have a huge boom at the moment and I know are also very important to a local art scene in San Antonio. That would be my contributing factor, I think.  There are a lot of different models that are being rehearsed as alternative art spaces, or artist run spaces as they are called, and I know that recent reforms to taxes and whatnot have effected artist run spaces and organizations.  So, I spoke with some of the board members at Casa Chuck, and told them about some of the places like Border, or SOMA which they already knew about.  So, I’m very interested in how the idea of independent spaces has evolved from the 70s to the present day in Mexico City, and there are peaks and valleys of when they emerge and disappear, and sometimes there are years when commercial galleries have a huge boom and you see commercial galleries just sprouting up like mushrooms in the rainy season, and sometimes they disappear and they become another type of artist run space.  Right now I’m also seeing a lot of hybrid spaces that have a commercial aspect, and an educational aspect and a gallery.”

Over the years we’ve all seen these spaces crop up around Austin and San Antonio, and I’ve argued that Austin, in particular has really begun to find an experimental and artistic voice outside of its floundering (albeit getting better) institutions while San Antonio has done a particularly amazing job of collaborating between artist run spaces and larger art institutions.

According to Barbara, and in the case of Mexico City, “there was a boom in the 2000s where Mexico really exploded internationally in the art market, and a ton of galleries sprouted up and were really tested commercially.  Now there is a lot of non-conformism from the art scene, and you have the conditions.  There are abandoned buildings, there is a huge art scene, and people want to do their own thing and make the trend because they see it can be successful.”

But that’s the thing, they are successful, and the models are reused, and according to Barbara who has seen these models over the course of a number of years, these artists run spaces have at times lasted up to six years before artists move on to the next thing, and the next thing isn’t better or worse.  These artist-run, alternative spaces provide a conversation outside of the commercial world that provides a venue for experimentation.

As we moved the conversation along and began talking about both San Antonio and Austin, their differences and similarities, and the general lack of dialog between the two, it became more evident that Barbara will be right at home in the challenges and strengths that both cities provide.  She is experimental, artist-driven, and introspective, and will provide an outside voice that can shake things up and leave a strong impact within both cities.

Pay attention to her, Austin and San Antonio.  She has a lot to say that will be good for you, and she’ll be there mid-September through October.