Silence and Time at the Dallas Museum of Art 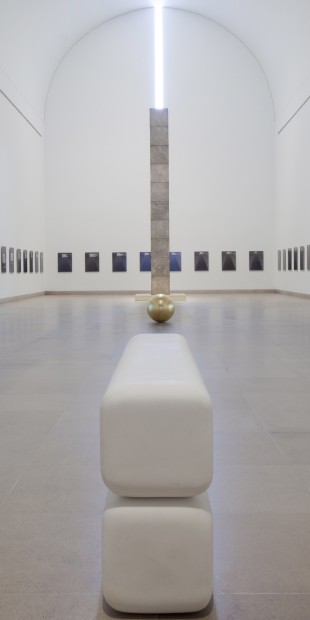 The Barrel Vault at the Dallas Museum of Art

Time is a bitch to be reckoned with, and so is the current exhibition at the Dallas Museum of Art. “Silence and Time” was inspired by John Cage’s 4’33” ; you can watch a performance here.

The DMA’s Barrel Vault is the perfect venue for this show. Loud on my visit but chapel-quiet on most weekdays, its wild acoustical changes make the atmosphere uncontrollable. I would be interested in seeing “Silence and Time” in the near-silence that inspired it, but I visited during the BooksmART Festival, so the entire museum was full of children. The gallery attendants stayed so close to the art – literally just inches from the sculptures – that I wasn’t able to look at the work. Kind of defeats the whole point of things, really.

Technology and numbers, two cold forces of human isolation, play starring roles in some of the show’s best pieces. Mario Merz’s “Fibonacci 1202” (1970) depicts a mathematical formula:  neon digits and their squiggly wires hover over photos counting people in a  horizontal stretch along the wall. Numbers, like math majors, are pensive yet systematic. It reminds me of the On Kawara exhibit in the same space a few years ago (his work is also represented here; visitors who had a hard time embracing conceptual art in 2008 should have an easier time in this context). I also liked Wade Guyton’s two Epson UltraChrome inkjet prints on linen. Both pieces were made in 2010 with today’s technology, but look simple and primitive facing Merz’s Stoppard-esque math tribute. 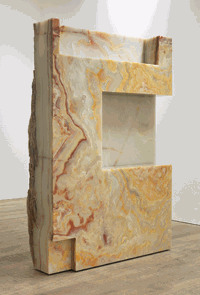 Bojan Sarcevic’s exquisite onyx “She” (2010) demands quality time if  you’re able to see around the gallery attendants. Think of Michelangelo’s Prisoners or the tablets held aloft by Charlton Heston in The Ten Commandments (I cast cultural references widely) then add a mountain cut in twain to make a highway – all those crazy layers of sediment – and you’ll get a vague idea. “She” looks religious. She isn’t, but she might call herself spiritual. “She” is a rock star (had to do it, sorry).

Allan McCollum’s “Surrogates” (1983) deserves a gallery all its own (it shares with two less interesting, more erudite works). It makes me think of an elderly matriarch’s home full of pictures that should record happily captured life events and progeny, but instead all memories are blackened, erased. This was not the artist’s intention but in a show about time and memory, I couldn’t get away from it, and the title supports the notion of the missing. Looking at “Surrogates” from the entryway of the opposite gallery is a dazzling perspective – the piece spreads beyond sightlines, as if the frames multiply forever. It looks like a life erased, but such glossy black filling suggests the lost images were glossier still. 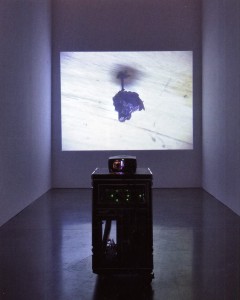 Three videos: a clock keeping real time on a 24 hour loop with numbers made of matchsticks, a not-fun political thing that I could not watch for more than two seconds before leaving, and a documentary narrative of a wasp building its nest, also in real time. Video is a problem in an art museum. The DMA tackled it well in past shows by Willie Doherty (greatness) and Phil Collins (total greatness), by balancing our cinema-television training in passivity with the gotta-keep-moving-to-what’s-next conduct of the art museum. Museum equals walking. Video is walking’s enemy. Paul Pfeiffer’s wasp video “Empire” would take a full three months to watch from beginning to end, and this tampers with everything I consider safe in the world. A story has a beginning, a middle, and an end. A noun is a person, place, or thing. Celebrity deaths happen in threes. All that. We have always held the power to turn off the telly or walk out of the movie, but Pfeiffer made a video impossible for anyone to watch from beginning to end, so that power is gone. Nicely played, Paul Pfeiffer.

“Silence and Time” was curated by the DMA’s Jeffrey Grove.

All photos courtesy The Dallas Museum of Art.

I’m interested in this discussion of power in relation to moving images exhibited in a museum/installation context. When you say that Pfieffer’s video “tampers with everything [you] consider safe”, is this a positive or negative sensation? Anthony McCall has something good to say about duration in this context: “I came to realize that the duration of a time based work could be a determining factor in how the work is looked at. A short performance [or film, or video] presupposes an audience that assembled at the same moment to witness it. This in turn created the expectation of a quasi-theatrical event. Extending the temporal structure through the day, on the other hand, defused that expectation and created a set of more or less individual visitors. Taken together, these changes created a quieter, lower-key relationship between the execution of the event and the watching of it. I wrote then, that ‘the work ceased to be a “performance” with a percievable beginning and an end, with boundries like an art object, but became rather a condition of the space, as is a high wind, a building, or the activity of a building site.'” this seems in keeping with the curatorial relationship to Cage’s compositions. I have yet to see the exhibit, but after reading this report i’m curious to see whether I’ll be as skeptical of these video works’ consideration of these relationships as you seem to be. Any other thoughts on this matter?

I couldn’t say either good or bad, Mike. I felt uncomfortable because this work challenged what I knew – and that made me happy. I think the high wind metaphor is the most fitting for this piece, because the video is going to go on, night and day, until it runs its three months, regardless of audience. It does not need or want viewers, necessarily, and most of it will screen while the museum is closed. I love that – I’ve never seen anything on a screen that wasn’t begging for attention. The other thing I realized after posting was how close this comes to my own little life, because there is a wasp hive right outside my window. You would think that would be my first association, but it wasn’t. (And I will be very interested in your response to the show – there was a lot more worthy of discussion that I didn’t go into here.)