A Conversation With John Gerrard on Art, Politics, Oil, and Texas 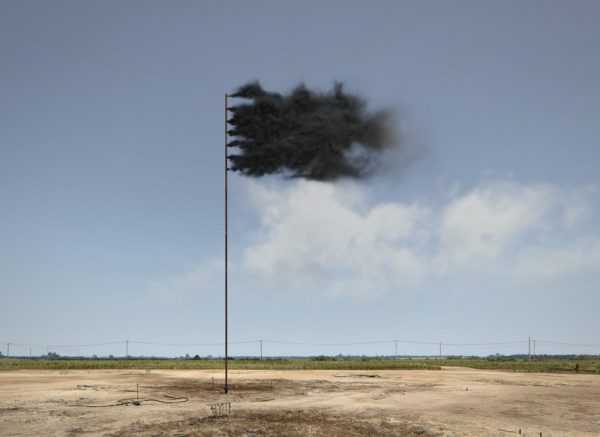 Based in Dublin and Vienna, John Gerrard is one of the 24 artists featured in the Dallas Museum of Art’s current video exhibition Truth: 24 frames per second. His work Western Flag (Spindletop, Texas) 2017, features the site of the Lucas Gusher, which was the world’s first major oil discovery in Spindletop, Texas (near Beaumont) in 1901. The gusher produced 100,000 barrels a day for the first nine days and thus began the Texas Oil Boom. Gerrard visited the now-barren and depleted site, taking over 10,000 photographs using a drone camera. He used the photographs to create a digital simulation of the landscape. In the center of this virtual place stands a virtual flagpole with a flag made of re-generating black smoke. At the actual wellhead site, a flagpole flies a Texas flag. The computer-generated video runs in tandem with the actual Texas site, with sun rising and setting at exact times and shifting according to seasons. Because the computer renders each frame in real time, the viewer will never see the same frame twice.

Ed note: This conversation has been lightly edited for length and clarity.

Colette Copeland: You probably hear this all the time, but what first struck me about the work was how real it looks. After reading that it was a digital simulation, I kept going back to the projection to look for clues of artifice. In some ways, the simulation is more ‘existent’ than a video, which only captures 30 frames per second. Tell us about the simulation in your work as a conceptual framework to examine power structures.

John Gerrard: My studio is formed around the idea of portraiture; with a team of producers I create portraits of places I find in the world — real places. Typically we will complete a comprehensive survey of the site across the day and night, making many thousands of pictures of what we find there, supported by a drone survey to produce a high-resolution image of the ground cover. These resources are supplied to modelers who will spend up to six months remaking those documents into three-dimensional digital models. These are then placed within a game-engine environment to make up the world of the work. Thus the realness of the scene is a product of how we approach what can be thought of as the virtual, and my rejection of a specific game style or aesthetic, and the usage of generic forms in 3D generally.

In terms of video and simulation — there is no strong relation. Video typically is a camera- or lens-based record of the real — streams of images printed to a digital timeline of 24 frames per second — or sometimes many more frames in a slow-motion type capture. Simulation is a piece of software in which there is no record whatsoever. The software encompassed a model, and that model is the space within which reality, time, action and instruction is manifested. This is what the public experiences on seeing the work.

In terms of power structures, this ‘model’-type nature of the simulation is important. One models the real — in many industries, banking in particular, but also the military — and make decisions on the basis of those models, so these are influential forms. Again, I do not see film or video as related to simulation. There is such a different history and application.

CC: When Western Flag was first shown, it was aired on Channel 4 in London on Earth Day earlier this year, periodically interrupting the station’s broadcast. What was the public’s reaction? I suspect that if that happened in the U.S., people would immediately assume it was some sort of terrorist attack.

JG: We had a broad reaction on platforms such as Twitter to the broadcast. Bemusement, some alarm, some fear. There was definitely a thread where individuals thought Channel 4 had been hacked or attacked — but also others where questions were asked as to who one would pump black smoke into the atmosphere on Earth Day. Few read the work as a piece of software, and indeed, I suspect this may have been the first live simulation feed to national TV in UK history,  so one would not expect it to be so obvious.

The day of interventions was over so quick — the major response actually came from the live stream to Youtube — which Channel 4 supported for a month. I suspect that resulted in millions of views for clips from that stream, in particular on Facebook, and a very vigorous discussion as to what the work was and what it referred to. My favorite is one on Reddit in which issues of colonialism, flags, responsibility and globalization got so fraught, the moderator shut it down.

Western Flag, a piece of art commissioned by C4 for Earth Day from vexillology

CC: For the past ten years, oil and petroleum have been reoccurring subjects in your work.  What do you hope that the public will take away from viewing a work such as Flag or Burning Oil Fields?

JG: Intellectually I cannot get away from oil. We are burning 100 million barrels a day (more exactly 96 million barrels of oil and liquid fuels per day, or more than 35 billion barrels a year), so when I look at any city worldwide I can see past this great consumption happening before ones eyes. Rivers of cars day and night flowing along on this resource, ships on the ocean, vast military exercises, production of fertilizers — it is a long list. And when I read of so-called green cities emerging, I wonder to what degree carbon-based resources are factored in for the reckoning of their core infrastructures. Electric cars are extraordinarily power hungry in the production of the plastics, metals and batteries they use, not to mention the data processing needs of the much-vaunted self-driving cars.

Overall I have come to think of contemporary society as a sort of virtual state of oil, and it is interesting to respond to it using simulation or the ‘virtual’ as such. For Flag, I wanted to try to produce a political representation of the ‘petrol state’ in which we all live. An alluring, beautiful, prismatic form — flag-like in its movement — but also deeply toxic. The other side of the 35 billion barrels of course is the great die-off of all other species bar the human one. Thus the lux gasoline flag under which we live is a death flag for most other life forms. 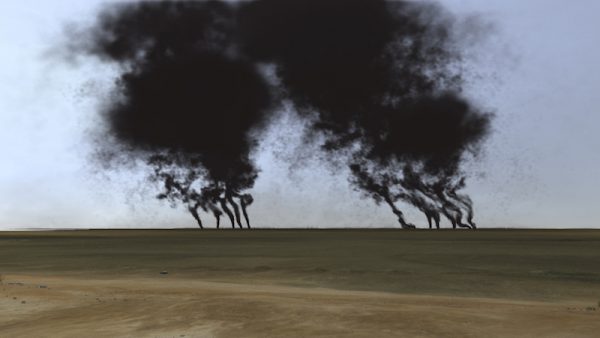 CC: Political art and activism has been at the fore of art conversation recently. What is the role of the artist in our culture today?

JG: I suspect that the role of the artist is the same as it always has been. As a working artist one has the great privilege of having a voice — and the simultaneous privilege of speaking in public about things you feel are important.

As mentioned above we are petrol people who exist in a petrol state. The only reason we do not realise how filthy the world is becoming is because our great waste material — the fundamental excrement of the 20th century into the 21st — is invisible. Carbon dioxide has no colour, taste, or smell.

CC: This isn’t your first project in Texas. You also made the digitally simulated Dust Storm in Dalhart, Texas in 2007. Besides the historical events that inform the work, what is your relationship to Texas? I find when I travel abroad, the tropes of the cowboy and Wild West are still very much alive in people’s perception of the state.

JG: My primary relationship to Texas is to its long and multilayered histories of oil and gas and how they intersect with the landscape. The Dust Storm works lead from my research into the emergence of the internal combustion engine agricultural tractors in the 1920s, and how in time that led to a plough-up of 100 million acres of the midwest of America — destroying a grass ecology and creating the dust bowl. The drought cycle was secondary to the core destruction of a ‘holding’ system of ancient grassland.

This sense of extremes still informs the Texas landscape, in the feedlots, the grow-finish [barns], and the vast, centrally irrigated nitrogen-fertilized corn fields. What happens in Texas is often more resolved and extreme than elsewhere — and yet is also in this desolate plain, an old shallow sea bed, which gives it a specific aesthetic and presence which I find very interesting. There is a sort of virtuality to the plains of Texas that I am very drawn to. 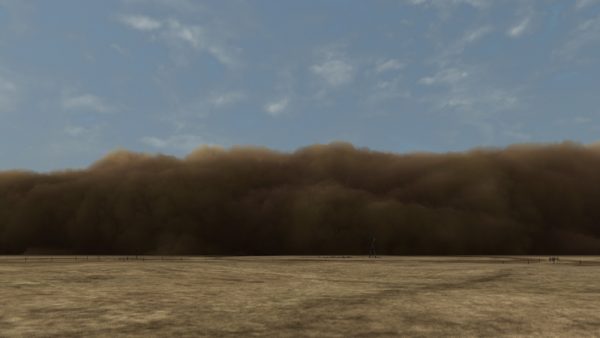 CC: Has anything strange happened to you while photographing at one of these sites?

JG: I was photographing a pig production site — a computer-controlled grow-finish unit once, and I noticed a human hand sticking out of the effluent pond, which was very shocking. When I investigated more closely, I realized that it was actually a latex glove, which had risen to the surface of the sewage and likely inflated with gas. It looked extraordinarily life-like and extremely uncanny, as if a corpse was reaching toward me. That was pretty strange and frightening. The other thing that happened was being approached by a worker — I expect he was a Mexican national — who explained that this place (a grow-finish unit) site was private and I could not enter it. What I remember most vividly was that he was equally as frightened as I was. We were both literally shaking. Me with the fear of a trespasser who had been caught,  and I think him with shock at finding a person with a camera so far from the road, who was actually using his legs to both traverse and document the landscape. I suspect it had not happened before. Mainly nothing is much stranger than the landscape itself and the industrial scale exploitation of it. That is my main fascination with these places and hard to beat in weirdness terms.

‘Truth: 24 frames per second’ runs through January 28, 2018 at the Dallas Museum of Art. John Gerrard will be in conversation (along with Amber Bemak and Elena Torok) with Jerome Weeks at the DMA on Jan. 25 at 7 p.m., as part of the Museum’s State of the Arts series. For more info, go here.