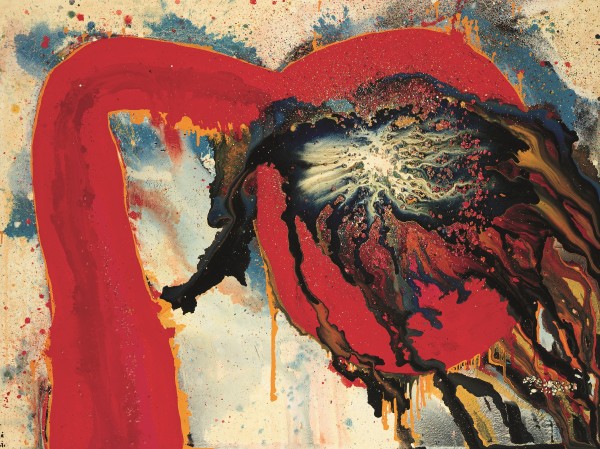 Due to Dallas-based über-collector Howard Rachofsky’s dedication to Gutai, the radical post-war Japanese artist group, and in tandem the Dallas Museum of Art’s current commitment to it, one might think of Dallas as a kind of new center for appreciation of Gutai outside of Japan. But while the Guggenheim’s 2013 Gutai exhibition took in all aspects of the group’s oeuvre, it’s almost odd that a major Dallas museum’s initial full-throttle foray into Gutai is focused more sharply on two of the group’s fairly conventional abstract painters. Gutai is, in fact, most often cited for its Dada-esque performance, installation and demonstrations; in its own postwar angst-meets-liberation impulse, Gutai concerned itself with novel theories around finding beauty in destruction.

But since documentation of (compelling-looking) performance isn’t particularly marketable to collectors or regional museum-goers, we here in 2015 Dallas are dealing with stuff you can put on a wall. This is despite the fact that in Gutai’s heyday, it was to some degree the paintings that critics and curators in New York considered derivative, which branded the whole group as such and caused Gutai to recede back to its own shores until very recently.

Kazuo Shiraga and Sadamasa Motonaga are the focus of the DMA’s excellent show (with some other Gutai ephemera and documentation sprinkled throughout), and it seems that in the current Gutai fever, Shiraga has gotten far more attention than Motonaga. Shiraga is all over New York right now. Granted, Shiraga’s pushing around of great piles of paint recalls the works of some Western Ab-Ex painters, so it’s easy for Americans to fall into step with it, but it’s hard for me not to think that part of Shiraga’s popularity has to do with how heavily he documented his wild process, and that documentation is exciting to look at and conveniently of a piece with Gutai’s performative spirit. A two-for-one, if you will. 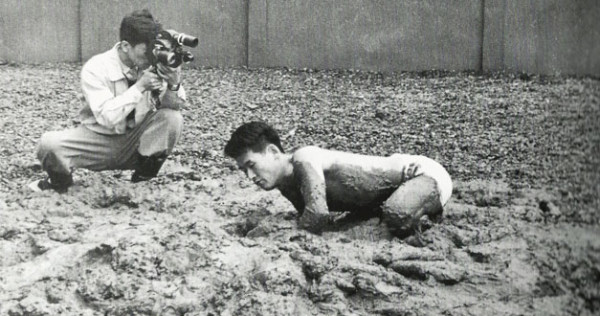 Shiraga painted most all of his major works with his feet, and there are plenty of images of him doing it (the DMA show features a few), and in them he’s often hanging from a suspension frame as he skates over his paint, or he’s doing acrobatic splits on a canvas, or wrestling with mounds of mud (more performative than object-making). It’s all so historicized and beguiling, and the works at the DMA have a nice hefty presence—they’re dense but lively and they actually communicate his bodily effort. 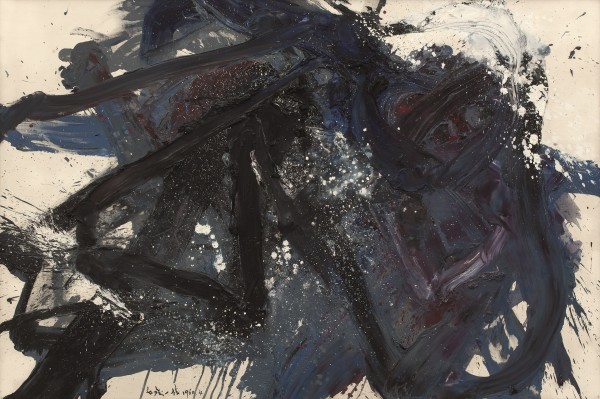 But they’re also somewhat repetitive and unsubtle; Shiraga wasn’t a big evolver. I was happy to see a deep selection of his work, but for me the foot thing starts to feel gimmicky and rut-like, and especially against the work of his cohort Motonaga, who hasn’t gotten much press in the U.S. The museum was right to pair up the artists—more personalities create more context for what Gutai was about—but for me the revelation was Motonaga. I’m as seduced by his work as much as I am his evident readiness to shift and experiment and grow without losing sight of what most turned him on, which is to my eye a guided organic shape’s love-hate relationship with happy accident and improvisation.

Motonaga’s paintings here are mostly from the ‘60s and ‘70s, and the early work looks as fresh as this morning. His shapes—and the shapes are the characters here, quivering with pathos and vibrating with personality—evoke natural forms with a fantasy edge. The early-to-mid-60s ones are downright sci-fi in their fungal, spore-shooting way, with forays into abstracted nectar-oozing pistils. Make no mistake; Japan was in full-blown post-nuclear Godzilla mode during these years, and while Motonaga is more subtle than that, these paintings aren’t sweet. 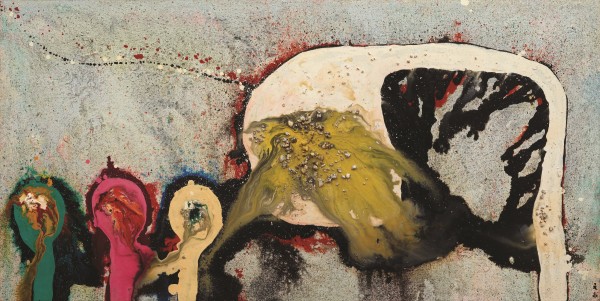 Sadamasa Motonaga, Work No. 1, 1962, oil, synthetic resin, and gravel on canvas and board 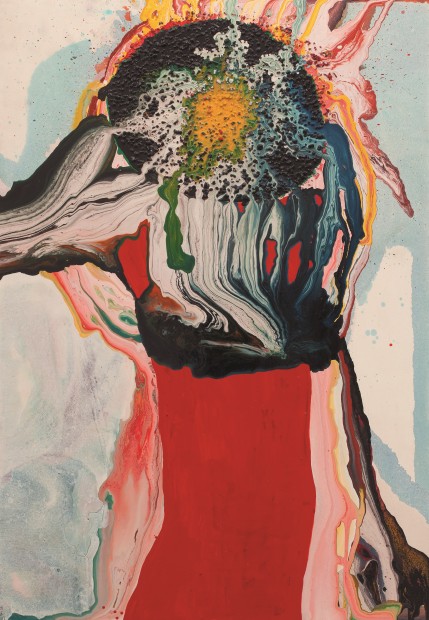 Motonaga was self taught and practiced his own version of a Japanese painting technique called tarashikomi, where wet paint is poured into wet paint and allowed to bloom and ripple. Motonaga’s wet into wet suggests intentional mushroomy shapes in oil paint that he disfigured and/or embellished with actual scattered gravel and radioactive-looking wet resin; the results can be as explosive as they are quietly sinister, and quite 3-D. If I were an art collector right now, I’d be hoarding them, and not to flip. His early background, I gathered from his sketchbooks displayed under glass at the DMA, was in comics. It shows. (And reproductions simply can’t do justice; these paintings are terrific in person.) 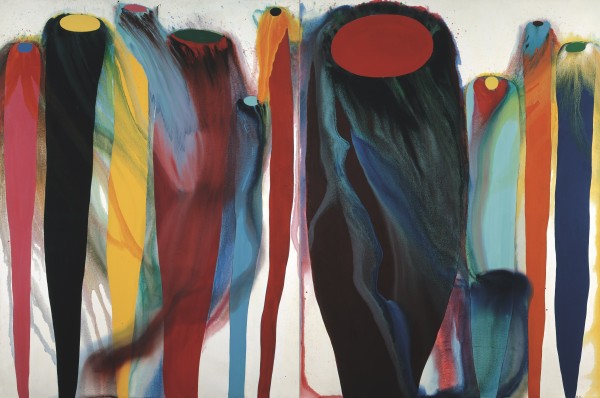 The DMA show follows Motonaga to his next phase, when he moved to New York in the late ‘60s and couldn’t source his usual synthetic resin, so he started experimenting with airbrushes—the flecking spray at the edges of the new lines are in keeping with the spattering lava flow of his earlier paintings, but there’s far tighter control here. His cartoon shapes shift from undulating and plant-like to something far flatter and Pop Art; the colors keep buzzing but his creatures are now well-defined, suspended and adrift, like untethered zeppelins or extraterrestrials in Pepperland, but with all the sound sucked out. 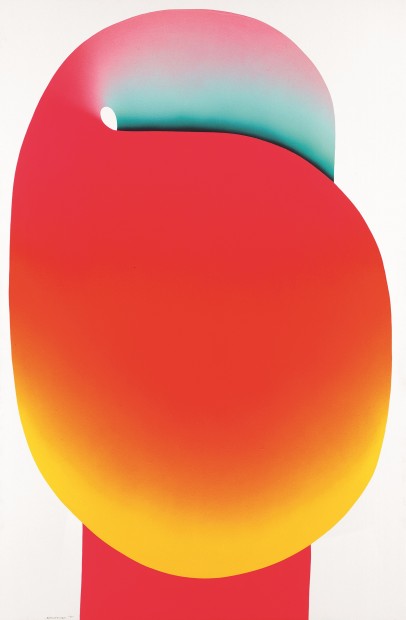 So they’re quieter, and lonelier, and remarkably way more retro, but still eminently lovable. I think his work stands up to much of the late-mid-century Western painting canon and would look very much at home alongside Motherwell, Gottlieb, et al. I realize that’s not the point anymore, and that’s not the place from which he painted—Japan had its own baggage at the time. I also understand he went on to become one of Japan’s most popular illustrators. Good. It makes sense, and at least his own country got how great he was while he was still alive.

Loved this show — especially Montaga’s work. I applaud the DMA for showing such an extensive collection of these two artists. This show and the RongRong&inri @ the Modern stayed with me. I wish the Modern had more of RongRong&inri’s work. It left me wanting much more. North Dallas folks: don’t miss these shows.

Very glad to hear you say ‘gimmicky and rut-like’ about Shiraga. Rachofshy’s Warehouse collection has a tape of the foot-painting trick, and watching it, the whole thing seemed to go stale after just a few minutes.