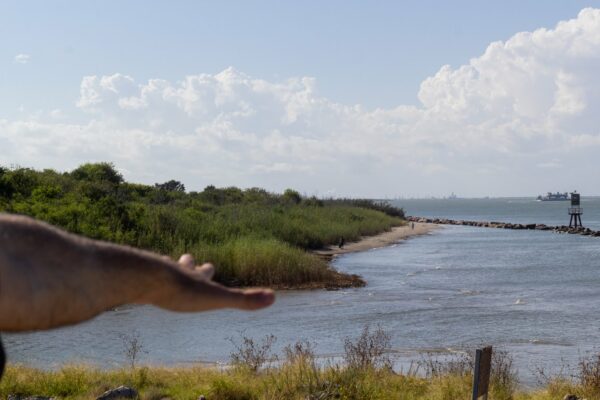 When I arrived in Galveston to visit the newly moved-in residents at the Galveston Artist Residency, I had an open mind about experiencing the city. As you probably know, it’s easy to enjoy Texas in October — the humidity evaporates and the weather cools down. The same is true on the coast, where the gulf breeze is as welcoming as it is comforting. For the three resident artists, arriving in the Gulf Coast from New York, Los Angeles, and Philadelphia means meditative beach walks and salty Muffaletta sandwiches are just outside their doorsteps as they take time expanding their artistic practices. 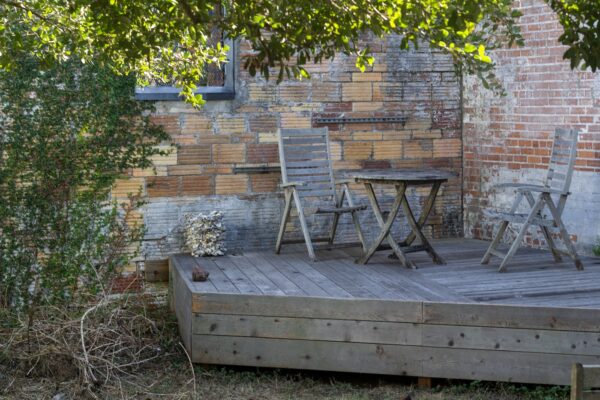 The interior courtyard of the Galveston Artist Residency

The Galveston Artist Residency (GAR) is a ten-month “gift of time” to three artists. Each recipient gets a  monthly stipend, along with an individual studio space and a private apartments in the city’s historic downtown. The residency period begins in October, towards the later part of hurricane season in the Gulf of Mexico. (It used to begin in September, making the residency eleven months, but oftentimes residents’ move-ins were delayed by storms.)

In that first month, the residents encounter the onslaught of Galveston’s peak festival season, with sections of downtown barricaded for art walks, Oktoberfest, and a biker rally, which locals assure me is the most raucous of all three. Galveston is well suited for this kind of foot traffic: Avenue B, also known as “The Strand,” is a five-block National Historic Landmark District of Victorian buildings dating back to the 1850s. Galveston’s legacy as a port city means that people are always arriving and going by sea; today, stadium-sized cruise ships loom behind the Strand’s buildings. The regional proximity to Louisiana lends a certain air of celebration to the small island city (and, after Hurricane Katrina, a kinship in full-scale natural disasters).

The three artists for the 2022-2023 cohort come from abroad: Lili Chin from New York City, Samira Yamin from Los Angeles, and Wiliam Warden from Philadelphia. Individually and as a group, this is their first substantial experience with Texas. All were nervous to let me into their studios; they had relocated from far away and this was reflected in their spare work spaces. Towards the end of my visit, when they had unpacked more completely, each of them echoed the qualities that made the Galveston Artist Residency attractive to their artistic production: time and space. In mid-October, they were at the beginning of a long road, and would take some time to get accustomed to the place that was hosting them. Their unfamiliarity with Texas and the Gulf was a contrast to my experience as a lifelong Texan. Over fried fish and Oktoberfest steins of beer, we slowly shared our different references and got to know each other.

Artist residencies don’t have to be social. For a certain artist, it may be a distraction. Also, ten months in a studio is more dedicated time than some artists can realistically manage. There are many workarounds for having an art practice that is not fully funded, like creating exclusively digital media so that the studio can be contained to a computer, or building out a home studio instead of renting one. The artists arriving at GAR have made a commitment to relocating, and take that commitment seriously. But Galveston, as a tourist hub for cruise ships and other vacationing Americans, should be experienced in all its festive offerings — a social requirement that, for a small, stuck-together group, could be challenging.

Moving temporarily to new place for a residency means that every moment spent in an artist’s new environment is fraught with pressures to make. GAR Director Eric Schnell knows this about the city and runs the residency with a kind of cordiality that is both hospitable and unassuming. Art markets and live music will take place from time to time in the interior courtyard of GAR’s studio building, which also houses a gallery space and an office. Being around the Residency, especially during a public event, is reminiscent of CentralTrak, the now-defunct community space/come-and-go residency in Dallas. Scnhell’s ability to make connections to points of interest within the Galveston art community is entrancing, and seeing out-of-towners integrate with other Texas creatives, either at a musical performance in GAR’s courtyard or at a festival, is heartwarming.

So, what will these artists get out of their time and space in Galveston? 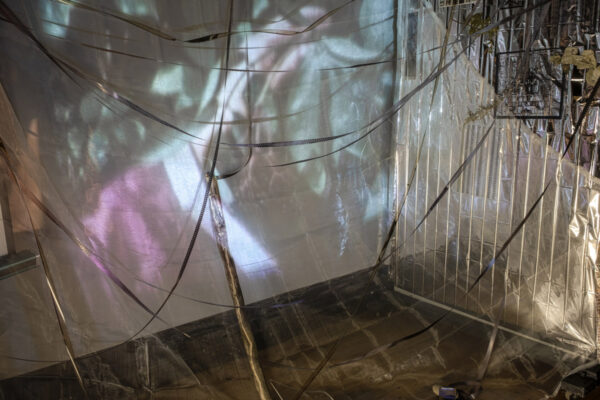 Lili Chin, “The Many Variables of Silver Night” 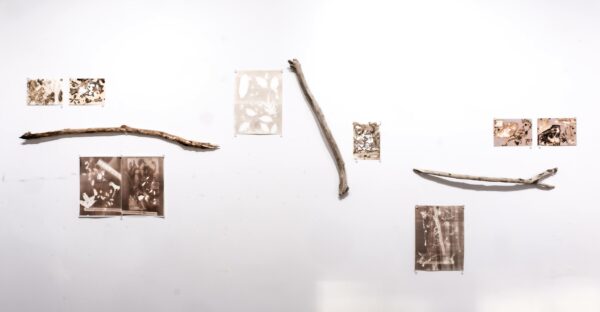 Lili Chin, “The Many Variables of Silver Day”

Lili Chin is investigating the conversation that materials have with each other, as well as how they are informed by place. She’s seen a lot of places this year: Rochester, where she completed one residency, and Scotland, where she completed two more over the summer. In Rochester, she was researching silver pollution in the Genessee River from Eastman Kodak Co. In Scotland, she found herself enamored with the natural wonder of the landscape, including the east and west coasts of the country. Of both the process and the themes of the work she is developing, Chin told me,  “Probably Scotland and Galveston are going to overlap.” 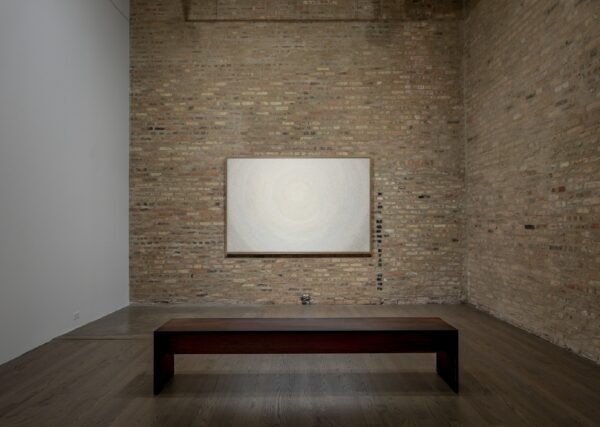 Water is also present in fellow resident Samira Yamin’s work. “I’m not a photographer, but my work is all about photography,” she tells me in her studio. She shows me a mockup of an installation she’s preparing for the new K Line for the Los Angeles Metro rail. It’s a triptych of three lightboxes which show a stream of water spilling from left to right. The work was made using a darkroom process, meaning no camera was involved, and is documentation of shadows made by a constructed tub filled with water. The work is meant to embody the sensation of spilling from a train car out into the world again, a feeling imbued with conflicts of order and chaos. 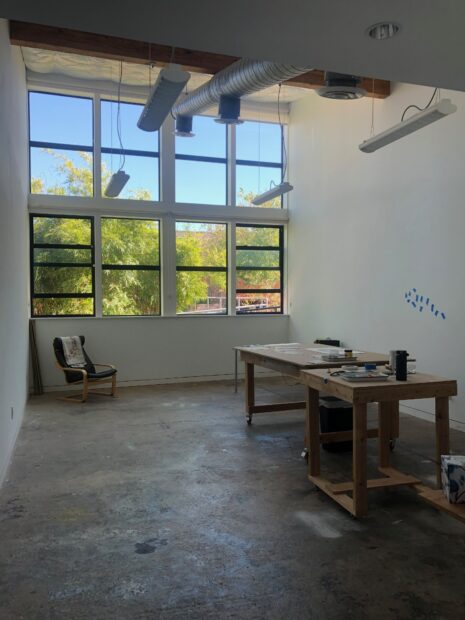 In Yamin’s studio, we stand over tiny triangles of paper on archival magazine boards, which she waxes so the individual pieces don’t move around while she’s working. The elements are photos of the sky over Syria, which Yamin cut out of every Time magazine issue between 2011-2019; they chronicle the ongoing conflict in the country. The final work is a mosaic-like piece arranged by value, light to dark. Showing me a binder of all the clippings and reference material needed to make the work, Yamin says “We’re looking at nine years of representation of Syria all at once.” The work is intended to make the representation of an embattled place dynamic again, replacing the static narrative of turmoil that currently encircles the country. The leftover pieces that didn’t make it into the work dotted Yamin’s workstation. 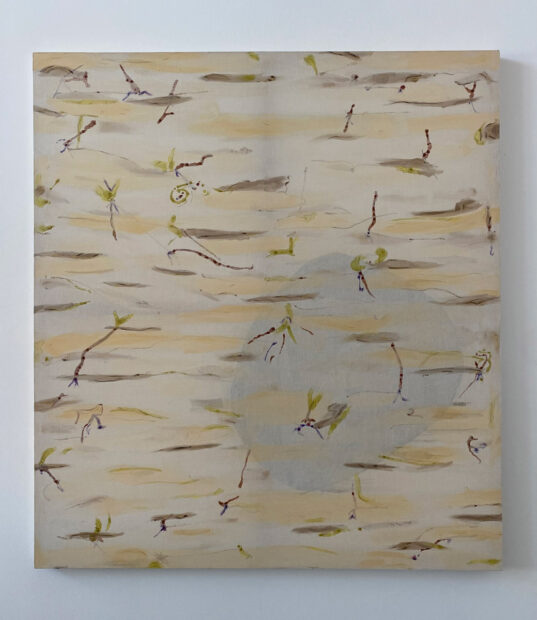 Philadelphia painter William Warden’s studio had rolls of muslin, his substrate of choice, strewn about its concrete floors. Bottles of pure pigment and a glass pestle sat on the table, ready to be mixed into the stains which he applies to the back side of his paintings. He showed me a former painting, removed from its stretcher, which may go into new work while he is in Galveston. Warden’s space felt like a research lab, prepped for experimentation. The auxiliary materials of his practice — music and books — also lay in boxes, ready to be integrated into his island experience. 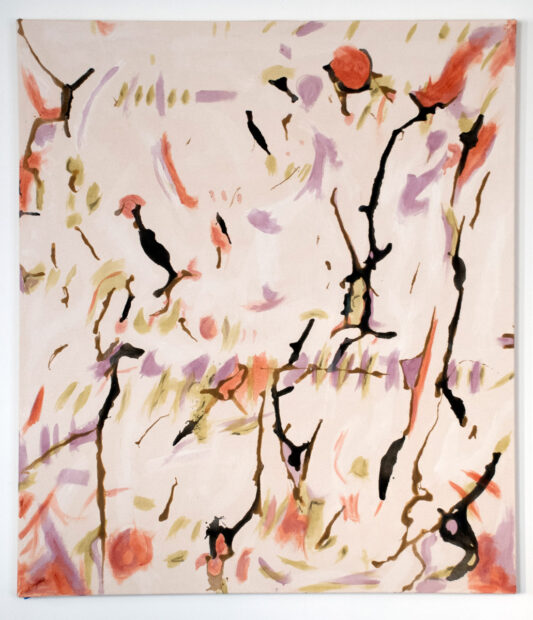 When talking to painters, I often ask how they feel about the difference between working in abstraction or figuration. Warden said, “[Abstract painting] has a representational quality in our culture, now, that makes it almost like a figurative thing.” He then told me an anecdote about how he developed one work over time. “I was making a painting and I would paint all over the walls. I’d take the painting away, I would take a photograph of what was the detritus on the wall, and I would make a painting of that. It was all this remainder of something.” The result is a painting layered with both representational and abstractionist modes. Looking around his studio, I could see how the bits and pieces, even at such an early stage in his residency, could become reflections of their former selves in future works.

The three resident artists are just beginning their Texas journey at GAR. By July of next year, I suspect they’ll be more entrenched in Texas culture. Through their creative investigations, and through their own (possibly ongoing) commitments to the state, we may come to accept them as our own.

Such an amazing residency program in a jewel of a place in the Southeast Texas gulf. GAR is a special space for not just residencies, but cutting edge art exhibitions and community events. Thanks for sharing more about this cycle’s residents! Looking forward to more info about their show at the end of the residency 🙂