Myth and Legend: Dawolu Jabari at the Galveston Artist Residency

Sometime around 1280 BC, the king of the Hittite empire made a treaty with a person named Alaksandu, who was the king of a city called Wilusa in northwest Anatolia. The Hittites were at odds with the Mycenaeans. We know these facts because in the 1920s archeologists discovered Hittite tablets describing the events. Wilusa is thought by some to be the Hittite word for Ilios (another name for Troy), and Homer sometimes referred to Paris, the prince of Troy who is said to have caused the Trojan war, as Alexander. What was apparently a real war between two groups of people in Asia Minor became, after hundreds of years, a legend to the ancient Greeks by way of the Iliad.

The legend was lost on the Hittite side as that empire disappeared during the Bronze Age collapse, in about 1200 BC. One can assume that Alaksandu never judged the beauty of three Greek goddesses, never chose Aphrodite, never was awarded with the love of Helen, and never started a nine-year war between Troy and a confederation of Greek city-states. The mundane realities of Hittite politics evolved over time into a foundational myth of Greek and Roman civilization. 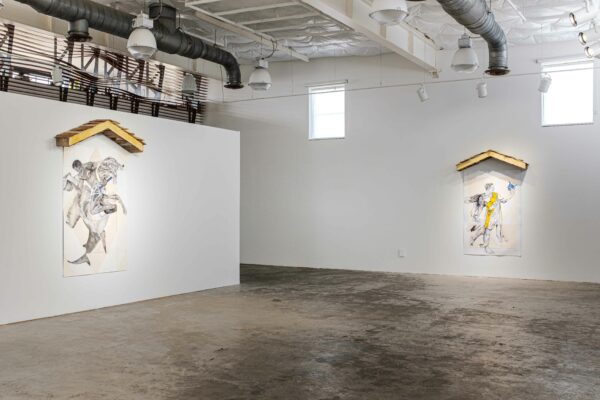 This way that history becomes myth was a fascination of Marvel comics artist Jack Kirby; it is the basis for his comic book series The Eternals, which he began in 1976. Kirby’s work is crucial in understanding the work of Dawolu Jabari in his exhibition, Lessons from Above: Constellation of Quilts, on view at the Galveston Artist Residency. In the exhibit, Jabari imagines that various persons from African-American history have become mythologized and associated with constellations, and that their names have been changed by time, just as the word Wilusa became Ilios.

Jabari draws his myth/constellation figures in a somewhat old-fashioned manner, such as one might find in a 1950s-era book documenting star charts. The figures are drawn in charcoal and are depicted in heroic poses. His characters also hold weapons, which are heavily outlined in black and painted in bright acrylic colors. With their high-tech sheen, the weapons resemble the devices used by characters in Kirby’s comic books, to the extent that the blue device held by Wowaytutsushohnun Bubrurohwownun, one of Jabari’s mythologized figures, is a specific quotation from Kirby. It is the “Ultimate Nullifier,” a device The Fantastic Four use to prevent the space god Galactus from destroying the Earth in issue 50 of The Fantastic Four from 1966. The “Ultimate Nullifier” could be seen as Kirby’s attempt to mythologize his time’s political situation, when the U.S. and USSR were constrained from war by the threat of mutually assured destruction. 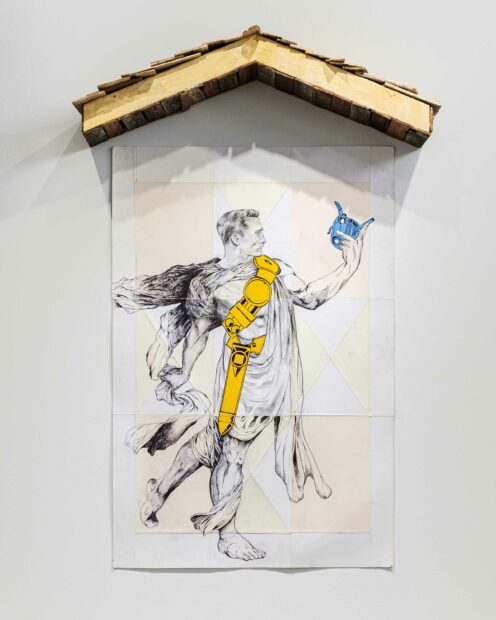 Wowaytutsushohnun Bubrurohwownun is the character Jabari mythologized around 19th century abolitionist Watson Brown. Brown was a real person: the son of radical abolitionist John Brown, he was killed while participating in his father’s failed raid on Harper’s Ferry in 1859. Jabari’s charcoal drawing mixes genres and times: in it, Brown is depicted as a white man with a 1950s-style haircut, and yet he looks like a Greek warrior, wearing a golden sword belt and contemplating the bright blue nullifier. The drawing, like all others in the show, is framed by a small gabled roof.

Jabari was a member of the artist collective Otabenga Jones & Associates, which included Jamal Cyrus, Kenya Evans, and Robert A. Pruitt. This show by Jabari is in dialogue with Pruitt’s work: both artists depict figures meticulously drawn using charcoal, and both also reference old comics, particularly Kirby’s. 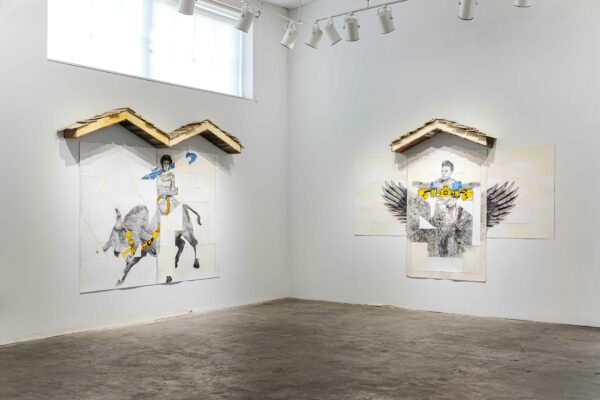 But while Pruitt and Jabari appear to be comic buffs themselves, their work in Otabenga Jones & Associates used few comic references. The work of the collective was highly political and somewhat conceptual; it was included in the 2006 Whitney Biennial, and also highlighted in a 2007 Menil Collection solo exhibition. The group’s tongue-in-cheek mission statement read:

1. TO TEACH THE TRUTH TO YOUNG BLACK YOUTH

2. TO EXTEND THE PARAMETERS OF THE TRANSATLANTIC AFRO-DIASPORIC AESTHETIC

While Jabari and Pruitt demonstrate evidence of the collective’s mission in their own work, instead of overt institutional critique or conceptual installation they instead seem to prefer the most traditional of media — drawing.

Anyone who has followed Jabari’s solo endeavors knows that he has mixed Black-nationalism and comic book cover pastiches in his work. One can see a good example of his earlier comic-book cover style in Twinkle, Twinkle Little Tar, which is in the collection of the Museum of Fine Arts, Houston. 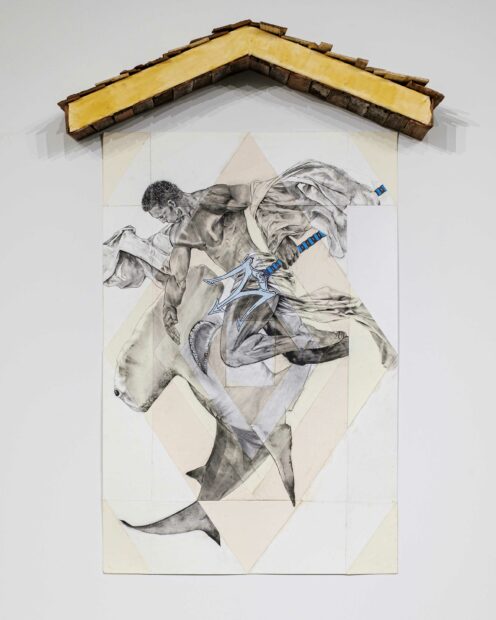 Compared to Jabari’s previous work, Constellation Quilts has a completely different energy. Even though he is still reaching back into old comics, his overall approach and drawing style is less graphic and far more classical. One piece in the show, Cuchushayrurlulesush Jujaycuckuksushohnun Fufrurenuncuchush, depicts a muscular, heroic, trident-wielding Black man fighting a hammerhead shark. Again, the mythological shark-fighting hero is based on an actual World War II hero, Charles Jackson French. Following a Japanese attack on his ship, the USS Gregory, French tied a rope around his waist and reportedly dragged a life raft full of injured men for at least six hours until they were rescued. While he swam, French noticed that there were sharks in the water; he later said of the experience, “I nearly peed on myself when one of them sharks touched my feet.” It is abundantly clear how this story of bravery and heroism could evolve into the myth of a shark-fighting superman. 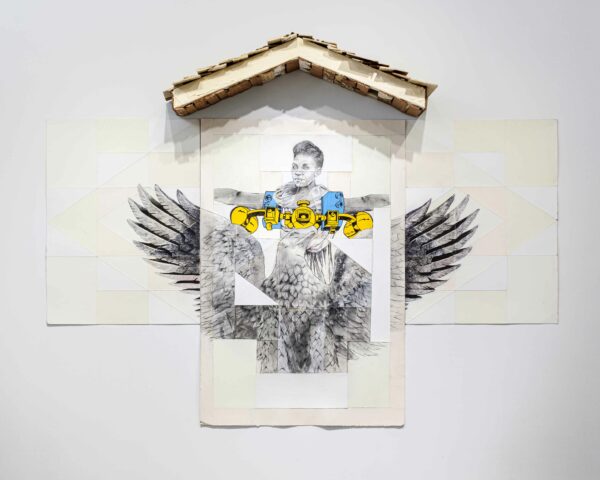 A third piece by Jabari depicts Cusaylulluleee Hushohyusushe, who is shown as a woman with outstretched arms, wearing a toga, and standing behind an eagle with open wings. The futuristic, sci-fi device draped over her shoulders is similar to a weapon that Kirby gave to his character Orion, who first appeared in issue 1 of New Gods in 1971. Jabari’s character is based on Callie House (1861-1928), an early advocate of reparations for slavery. In my brief research on House, she seems to always be depicted using a single photograph. In the image, which Jabari references for Cusaylulluleee Hushoyusushe’s face, she is shown in three-quarters profile with a proud look, and appears to be gazing at an uncertain future. She was eventually unjustly imprisoned for a year, because she had the temerity to advocate for formerly enslaved people. She’s yet another historical hero who becomes, over time, mythologized in Jabari’s world. 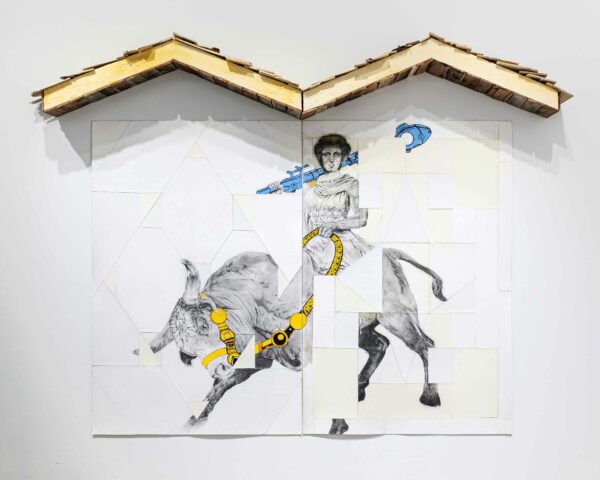 The last of these mythic constellations is Hushayrurrureeetut Rurohsushsush, a character based on Harriet Tubman’s mother, Harriet Ross. Jabari shows her holding a futuristic club and riding on the back of a bull, which she controls with a golden bridle and reins. This is the largest drawing in the show, and it sits under a double gable. The story goes that Ross escaped slavery by riding off of her captor’s plantation, in broad daylight, mounted on a bull. In thinking about the ubiquity of bull-related imagery in the world’s mythologies (and in constellations we have inherited from ancient cultures), it is only fitting that Jabari’s mythos include at least one depiction of the animal.

The gables covering each of the show’s drawings are meant to resemble the roofs of rowhouses. Jabari is deliberately recalling Project Row Houses in Houston’s Third Ward, but also rowhouses in general: the tiny, shotgun structures that housed African Americans all across the South. While row house structures were initially populated by sharecroppers in farming areas, they were also (and still are) used as urban housing. 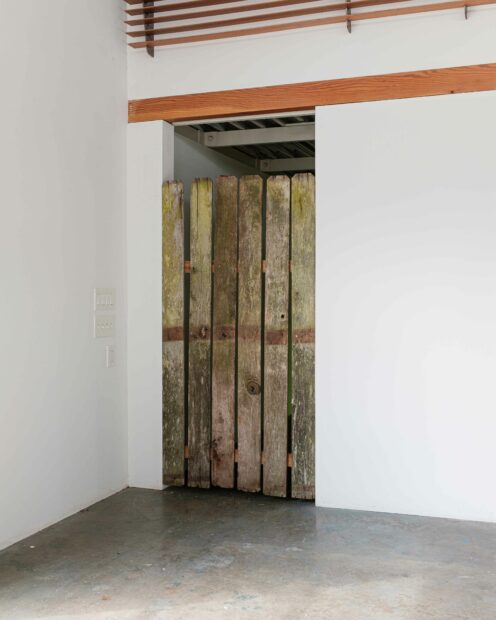 In the small side-gallery of the Galveston Artist Residency, Jabari has constructed a miniature rowhouse, lit spookily from within. Viewers can’t enter this gallery — tall, rough-hewn fencing blocks the space’s entrances, and viewers can only observe the installation through knotholes in the slats.

This piece is called Shotgun House Observatory. Perhaps we’re meant to use it to observe the constellations named after the new mythical heroes with whom Jabari has populated the dome of the sky. 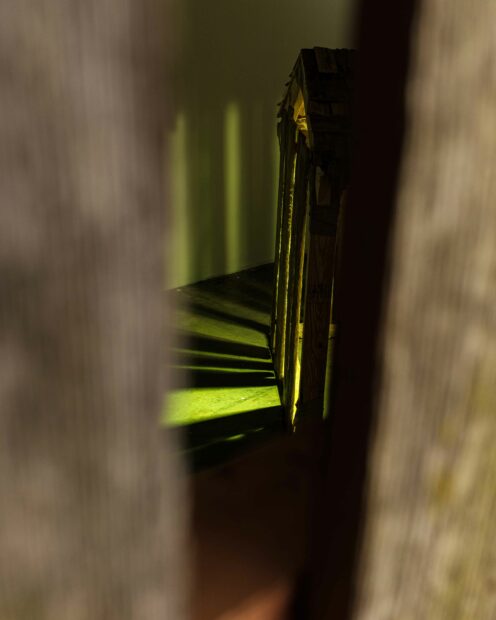 Dawolu Jabari’s solo exhibition, Lessons from Above: Constellation of Quilts, is on view at the Galveston Artist Residency through December 18, 2021.

So glad to see my friend making and showing work again….al-Hamdu lillah!!