To Shine, to Appear, to Show: J. R. Roykovich at the Galveston Artists Residency 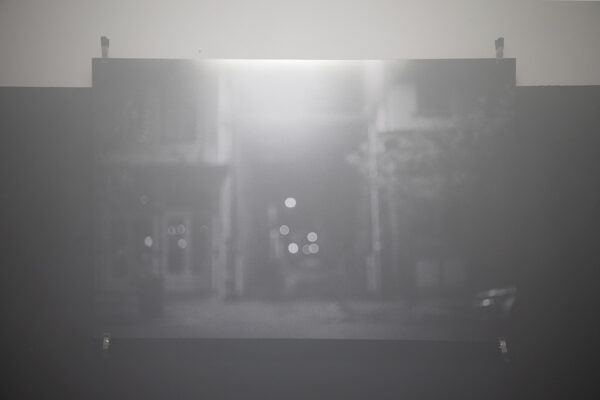 Between the eleventh and twelfth centuries, during his retreat in the desert, in the north of Egypt, Philotheus of Batos invented the verb to photograph in a text dedicated to the contemplation of God. For Philotheus, who avoided distractions, to photograph referred to the “non-reproducible” and, “singular experience” of light, because thanks to that light he received “the features and the luminous impression of god,” phôteinographeistai (“where God is photographed”).

The monk wrote: “this light, inexplicable in itself and that, however, becomes explainable not in words, but in the experience that enjoys it, or rather, that is wounded by it […].” From that moment on, the word photograph, as the art historian Georges Didi-Huberman recalls, was written, copied, repeated, and learned by many people over ten centuries: Photograph: Produce an image from chemical manipulation of the light. However, in its origin, to photograph underlined the sensorial experience of light, understood as a relationship between the body, the earth, the cosmos, and the sacred. In some way, this experience could be useful in approaching Travel in Light Years, the exhibition visual artist J. R. Roykovich opened on August 27, 2022, at the Galveston Artists Residency. 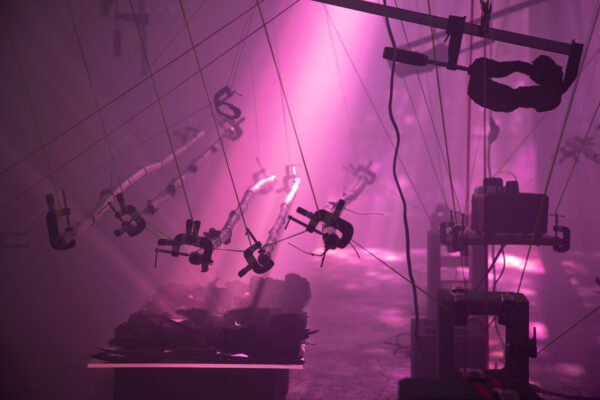 Divided into at least two sections, the artist and professor at Rice University proposes a series of questions about light, as a physical phenomenon, and about the notions of archives and ghosts from the city of Galveston — whose importance dates back to the 16th century as the last point of the Caribbean, and through the 19th century as one of the largest and most prosperous cities (and most important for commerce) in the United States. The exhibition opens with a series of small-format drawings on paper, which privilege the short and rigid stroke, making visible both the path of the hand and the material (markers, ink, gel inks) with which the drawings were made. Without a frame, these non-figurative drawings appear as a product of the playful experience of working on a two-dimensional surface without previous sketches.

At the back of this anteroom is a piece that works as a prologue to the installation in the adjacent exhibition space. In black frames, the artist assembled seven documents — six of them documents declassified by the FBI — that speak of apparitions in the skies over the city of Galveston. The first of them, from left to right, is a photograph of the sky covered by clouds, taken on December 10, 2021, at 4:29 in the afternoon. In the photograph, “no aerial phenomenon is observed,” the artist wrote. The remaining six documents are declassified reports, drawn up by “citizens” who observed unusual phenomena in the city’s sky, such as an object that, on July 20, 1949, traveled at an angle of 90 degrees. The object disappeared 30 seconds later, leaving no traces other than its impression on the body and experience of the citizen who filed report, number 10073.

All these documents are illuminated by a shimmering light, which comes from a paper filter hanging from the ceiling. Said filter does not attempt to change the color or temperature of the light illuminating the seven documents, installed in a straight line, but it does underline the presence of light, of said light, illuminating it, making it visible to those who contemplate the artist’s work. 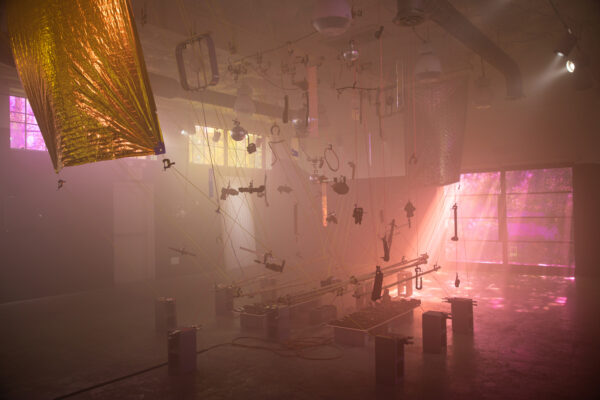 In the next room, the main exhibition space, is the feature piece of Travel in Light Years. In direct dialogue with the Galveston Artists Residency’s building, the installation brings together a series of metal objects found by the artist in 2018 in an old building in the city of Galveston. Rusty, impacted by humidity and time, modified by the territory and its memory, these objects account for the city’s infrastructure: nails, perhaps from nearby railway tracks; tubes from a complex and vast hydraulic infrastructure; machine fragments that probably served in the productive activities of the dock; and many other objects devoured and deformed by rust.

Most of these objects are placed in the center of the room on two Plexiglas bases arranged parallel with one another, while the rest, above said bases, are hanging, held up by construction lines, pliers, and a wide variety of clamps. Suspended, the objects seem devoid of mass and matter, as if they were ghosts that are only there to compare in front of the eyes of those who face them. On the other hand, these rusty objects account for the material conditions of the city: an island of 211 square miles — 45 of them from the mainland — located in a coastal ridge that separates Galveston Bay and Western Bay in the Gulf of Mexico. An island whose history is no stranger to the destruction, despair, crying, and grief with which storms hit its shores.

At the beginning of the 20th century, for example, a brutal hurricane hit the city, devastating it in minutes. Between 6,000 and 8,000 people lost their lives, and the area’s prosperity as a port was replaced by its reputation as a ghost town. For this reason, the objects chosen and exhibited by Roykovich also give an account of the spectral history of the city, understanding the specters as ghosts that haunt a particular house, or as ghosts that underline something unfinished and unresolved, that always threatens to return.

Jacques Derridá assures that the future is the time of the ghost. The hurricane to-come. The dead to-come. The hunger to-come. The desolation that will come as if it were an old acquaintance. Thus, the objects collected by the artist constitute a material archive that, like any archive, is simultaneously assembled by the objects and documents it contains, and by those that were either destroyed on purpose or washed away and destroyed by water, drowning in their corners. 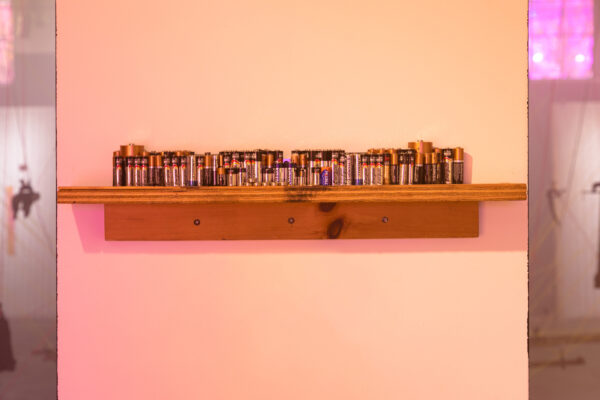 On top of this archive of warped and rusty objects are three disco balls and two silver blankets, one on each side of the installation. These objects are used to deflect light and illuminate unexpected areas of the archive. But perhaps above all, they serve to underline the presence of light, making it visible to all the people who contemplate and read and interrogate the archive composed by Roykovich. Perhaps the experience of light, that joyous or painful experience as described by Filoteo de Batos, is the most important in the exhibition. Not only because of the abundance of the light streaming through the windows of space, but also because the realization that that light, natural light, serves as a bridge between the earth and the cosmos (sun), and between our present and the past, where the torrent of light that we experience with our senses originated.

Understood as electromagnetic radiation, sunlight takes eight minutes to reach us, illuminating, passing through, and making visible many other bodies before us. From this premise, how do we date a ray of light that we experience and live here and now, but that actually departed eight minutes earlier? Or, paraphrasing Georges Didi-Huberman, is dating a ray of light and a ghost a similar operation? “How to make your genealogy? How to understand what governs the whims of their reappearances?”

Travel in Light Years: Artifacts & devices adapted to traverse the precarious spectrum In/Between Homofuturism and the superannuated as an exile in a land of glorious f/utilityis on view at the Galveston Artist Residency through November 12, 2022.

Myth and Legend: Dawolu Jabari at the Galveston...