Ro2 Art, a Dallas-based gallery, recently announced that it has leased a new property located in Dallas’ TIN District, west of downtown.

Founded in 2010 by mother and son partners Susan Roth Romans and Jordan Roth, Ro2 has been in its current location in the Cedars neighborhood south of Downtown Dallas since 2016. In the location, which is just 1,200 square feet, the gallery has typically presented two simultaneous shows — one in a larger, front gallery, and a second in a small, project-like space. Mr. Roth told Glasstire the limited space meant that works often felt cramped and the gallery was constrained as to the size of pieces it could show. 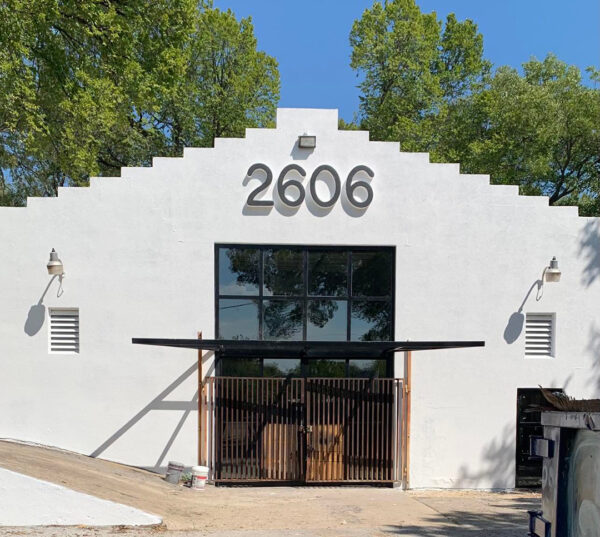 The new location at 2606 Bataan will have 4,000 square feet of exhibition space, as well as additional storage with a dedicated viewing room in an adjacent building. Along with the additional space, with its tall white walls, freshly polished floor, and dramatic entrance, the Bataan gallery provides an opportunity to present pieces in a more elevated way. When Mr. Roth was viewing potential gallery locations, the Bataan space caught his eye because of a unique architectural element — its roofline, which is stepped like a pyramid.

Mr. Roth told Glasstire, “I was excited about the size and scale and thought about the different types of programming that could be done in this space… Later, upon touring the TIN District and the many studios, my mom and I felt so welcomed by everyone we crossed paths with. It just felt like home.”

The TIN District, named because it emerged from former metal fabrication yards near Trinity Groves, is one of the largest communities of studio artists in Dallas. It is home to the studios of Jeremy Biggers, Sam Lao, Ricardo Paniagua, Jon M. Robertson, 2512 Studios, 707 Studios, 516 Fabrication Studios, Funky Fun Studios, and 516 Bedford Studios, as well as Cluley Projects, Daisha Board Gallery, 500X Gallery, The Fabrication Yard, and Sweet Pass Sculpture Park.

Though Ro2 has not yet moved into its new space, this past weekend the gallery participated in The TIN District’s 8th Annual Art Walk West event, which welcomes visitors to studios, galleries, and murals in the area. Ro2 will officially open the new space on November 19, 2022 with a solo show by Yuni Lee and an exhibition of new works by gallery artists. As of now, Ro2 will also maintain its gallery at the Cedars, shifting the focus of that location’s shows toward emerging artists, experimental works, curator-led projects, and hosting artists-in-residence.

Thank you for the writeup!! FYI, Opening at 2606 Bataan has been delayed until May 10.