Cornerstones of their respective art communities, both Fort Worth’s Kimbell Art Museum and the Art Museum of South Texas (AMST) in Corpus Christi turn fifty years old in 2022. Both institutions are hosting a variety of events to commemorate their rich histories.

When Fort Worth businessman and art collector Kay Kimbell died in 1964, his estate, via the Kimbell Art Foundation, set forth with the project of creating a world-class museum to house and preserve his collection. The board turned to renowned Estonian-born American architect Louis Kahn (1901–1974), whose many previous noteworthy designs included the Yale University Art Gallery (1951) and the Jatiya Sangsad Bhaban, or the National Parliament House of Bangladesh (1962), and whose Franklin D. Roosevelt Four Freedoms Park on Roosevelt Island in New York City was completed posthumously in 2012. 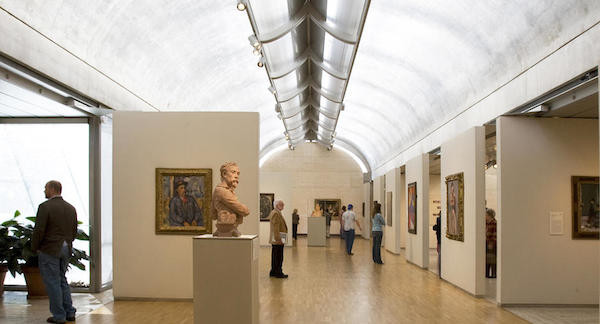 The interior of the Kimbell Art Museum’s Louis Kahn building.

Mr. Kahn’s Kimbell Art Museum, which opened in 1972, is composed of a series of sixteen parallel 20 x 100-foot vaults. Plexiglass skylights at the top of the vaults diffuse natural light throughout the galleries, a feat which led Mr. Kahn himself to proclaim, as quoted on the Kimbell’s website, “the museum has as many moods as there are moments in time, and never…will there be a single day like the other.” Widely celebrated as an architectural masterpiece and highlight of Mr. Kahn’s career, the initial building was further augmented by a Renzo Piano-designed expansion in 2013. Mr. Piano was familiar to the Texas museum community through his designs for the Menil Collection in Houston and Nasher Sculpture Center in Dallas.

Rooted in Kay Kimbell’s initial trove of Old Master paintings, the Kimbell Art Museum’s collection has grown slowly and selectively over the years to include, according to their website, 336 works of art. In deference to its neighbors, the Amon Carter Museum of American Art and the Modern Art Museum of Fort Worth, the Kimbell dedicates its collection entirely to non-American works that primarily predate the 20th century. However, the museum often expands the scope and parameters of its offerings through exhibitions.

In celebration of its golden anniversary, the museum is hosting The Kimbell at Fifty, a special exhibition of archival material and photographs related to its history in both art and architecture. According to the museum’s website, “an interactive digital presentation will enable visitors to revisit outstanding acquisitions, noteworthy exhibitions, and rewarding community experiences.” The exhibit kicked off with a week of celebratory festivities on October 4, the date of its grand opening fifty years prior. 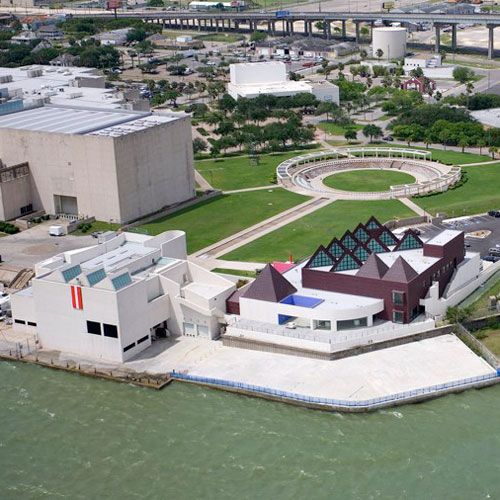 On the other side of the state, AMST is celebrating a similar feat. Its history goes back to 1936, the centennial of Texas, when the city of Corpus Christi proposed the idea of the Centennial Museum. That museum opened in 1940, in a 60 by 40-foot space that featured rotating exhibitions and held several different monikers until being relocated in 1972. Corpus Christi Caller-Times columnist Allison Elrich wrote a detailed history of that original museum building, which was still standing and in use as a boxing gym as of 2018.

The Art Museum of South Texas, as it was finally renamed upon relocation, coincidentally held its grand opening festival on the same day as the Kimbell: October 4, 1972. Also like the Kimbell, it was designed by a celebrity architect. In this case it was the American Philip Johnson (1906–2005), whose Texas portfolio also includes Houston’s Penzoil Place, TC Energy Center, Williams Tower, the Fort Worth Water Gardens, the Amon Carter, and Thanks-Giving Square in Dallas. Johnson’s legacy has been scrutinized recently over his outspoken admiration of Adolf Hitler, which dated, according to Nikal Silver in the New Yorker, at least into the 1960s.

Mexican Ricardo Legorreta Vilchis (1931–2011), a less controversial architectural luminary who had previously designed the main branch of the San Antonio Public Library and is perhaps best known for his Camino Real Hotel in Mexico City, was brought on by AMST to expand the campus in 1998. According to the AMST website, “Legorreta expressed interest in designing a building that would be appropriate in scale and complement the character of the Johnson building.” The expansion opened in 2006, doubling the size of the museum and providing its current jagged bayside profile.

AMST’s collection houses over 1,850 art objects, with a primary focus on American — specifically Texan and regional — art. The entire collection can be viewed online. Currently on view at the museum is the Oso Bay Biennial, a printmaking exhibition featuring works from seventeen Finnish artists, along with two collection exhibitions. Two additional temporary shows are scheduled to open this weekend.

In celebration of AMST’s 50th, the museum has reduced their annual membership fee from $50 to $19.72, marking the year of the institution’s opening. Furthermore, H-E-B has sponsored free admission to the museum for the majority of the year, from May 1 to December 31, 2022. In a press release posted to the museum’s website, AMST Director Sara Morgan said, “H-E-B’s gift of free admission removes the monetary barrier that may keep people away and promotes AMST as a place where our community can create lasting memories.”

More information on AMST may be found here, and more on the Kimbell here.