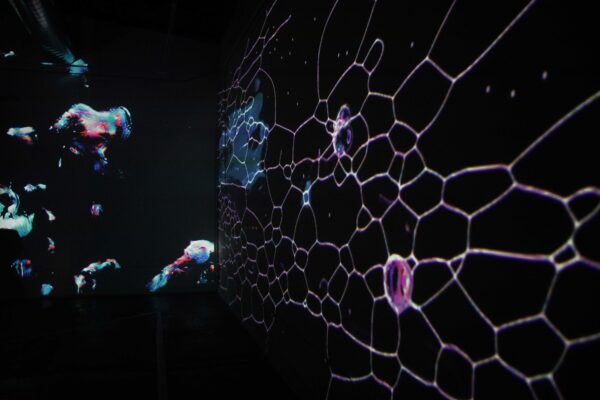 Cynatica Conductor, an interactive art installation combining projected visuals, audience participation, and sound, is far from the superficial, commercial immersive experiences found all over the country. Whereas $40 schemes such as the “Immersive Van Gogh Exhibit” gather large crowds seeking Instagram-worthy spectacles, Cynatica Conductor is wholly divergent, serving as an open laboratory for the public to connect and experiment.

The difference in method and quality of interaction of the installation for the viewer is what drives the main separation between these two types of interactive experiences. Open for play time during the entire month of September at FL!GHT Gallery in San Antonio’s Blue Star Arts Complex, Cynatica Conductor is the brainchild of Diego Chavez and Daniel Stanush, the creative duo known as A.M. Architect.

The installation involves a series of projectors mounted on one wall of the gallery that face two blank walls, which serve as A.M. Architect’s canvas. Two different projected video loops play on these two adjacent walls. The smaller, white wall is transformed into a scene with suspended digital jellyfish-like forms slowly bouncing up and down, titled Scyphozoa. Next to the jellyfish, the projection on the larger wall is a pulsating web-like design, emulating something found under the stare of a microscope. Both projections ebb and flow with their own slow rhythm when left idly undisturbed by visitors.

However, the sleepily moving video is awoken and transformed into different amorphous, energetic designs when sensors on the back wall pick up the hand movements of visitors standing in front of the projection. The main sandbox for projection play is outlined in the middle of the floor at FL!GHT with white tape. When moving in this area, the sensors will locate up to two people and track their hand movements on the projected wall. The projection begins to mirror participants’ hand movements, with small pulses simulating the dance of their limbs. The technology utilized for the creation of Cynatica Conductor incorporates Touch Designer, Kinect, and Ableton. Although programmed with sound and calculated to sense and reflect movement, the work is particularly open to different possibilities and combinations. 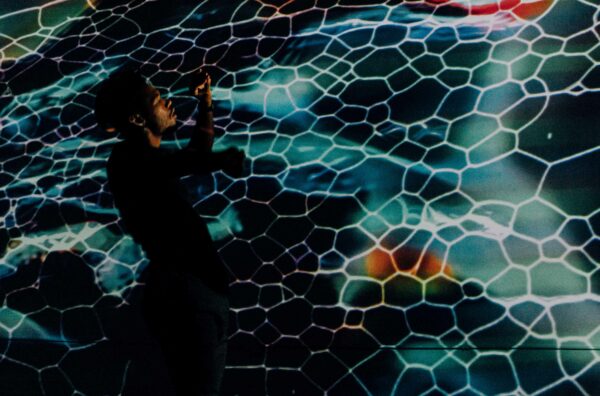 A participant interacting with “Cynatica Conductor.” Photo by A.M. Architect.

In addition to the projection’s tracing of hands, when an area of the projected surface is hit with movement, a pocket of once-latent sound is unlocked, and resonates in a surge accompanied by psychedelic visuals. Rupturing out and then fizzling softly back to silence, Cynatica Conductor ebbs and flows, informed by the bodies moving in front of the sensors. No lasting impression is made on the projection loop. Instead, the come and go of shadows tracing the flux of interactions speaks to the impermanence of the installation. It is almost as if the work absorbs the myriad performances playing out in front of the projection. Participants are absorbed in the welcoming wall of visuals and sounds they are able to create.

Although the installation exists outside of the viewer, Cynatica Conductor reaches its full potential only when someone interacts with it; the work is dependent on the action of people to transform and shape it so that it leaves leave a lasting impression. The experience is comparable to feeling absorbed in a painting, except while this is a passive experience, the role of viewer in relation to Cynatica Conductor is purely active. There is an element of agency granted to the viewer that is unmatched in the traditional art-beholding experience. Interacting with Cynatica Conductor is done in a “choose your own adventure” way; this method of approach gives viewers a level of control and allows for a certain amount of manipulation. The interacting viewer takes on the roles of artist and art all at once, adding to Cynatica Conductor’s novelty. 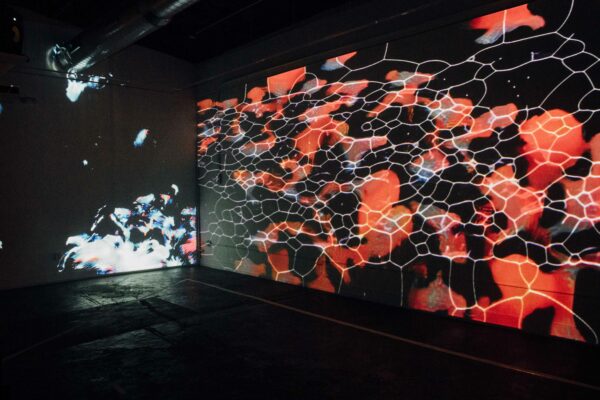 Concerning the title of the work, “cynatica” may be a variation of the word cymatics, which is the study of visible effects of sound and vibration. The “conductor” refers to the viewer as both the director of the ensemble, as well as the transmitting agent or middleman between light and sound. Through their hand movements, the viewer is in charge of orchestrating the experience. They are the middleman between latent programmed sound pockets waiting to go off, and the visuals on screen that are waiting to be agitated into motion. Therefore, the viewer as conductor is essential in bringing these disparate aspects together into one cohesive performance.

A.M. Architect’s Cynatica Conductor stimulates and almost confuses our sense perception. Perhaps the effect is similar to that of synesthesia, the experience of one sense through another sense, such as hearing music but seeing shapes. The way a person interacting with Cynatica Conductor moves impacts the music they hear and the visual shape-shifting that results. In effect, it combines these two senses with the self-awareness of one’s body. In this way, separate aspects of experience and reality seem especially connected when a viewer decides to fully tune in to Cynatica Conductor. 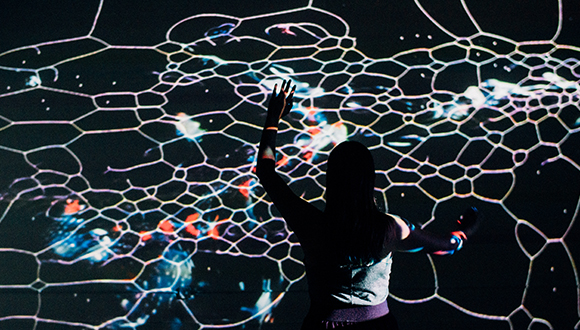 A participant interacting with “Cynatica Conductor.” Photo by A.M. Architect.

How would the fabric of reality morph if similar technology had the capacity to identify one’s mood from bodily movements and transfer that feeling into sound and accompanying visuals? Cynatica Conductor and its pre-programmed visuals and sound pockets is only the first step in this technological dream. Confronted with this new art medium, I recall a quote from Rainer Maria Rilke in reference to his experiments with the phonograph in 1919. Rilke says, “We were confronting, as it were, a new and infinitely delicate point in the texture of reality, from which something far greater than ourselves, yet indescribably immature, seemed to be appealing to us as if seeking help.”

The projection acts as both receiver and reproducer to the spontaneity, desire, caution, and impulse that drive the movements of those in front of the interactive work. Every participant is afforded a different experience of the art object, as it is shaped by their intimate tendencies of movement. The receptive surface of the vibrating membrane gives the work a unique internal subjectivity that goes unparalleled amongst other art mediums.

Cynatica Conductor is on view at FL!GHT Gallery in San Antonio through September 30, 2022.

The Gallery as the Bar: Amada Miller and...