At Justin Parr’s studio, I arrived moments before he completed a glass marble.

“I’ll be done in 5 minutes,” Parr shouted down to me from his second story studio. I was prepared to pivot and spend a few minutes poring over the weedy lot of his studio in Hot Wells Park, south of downtown San Antonio. 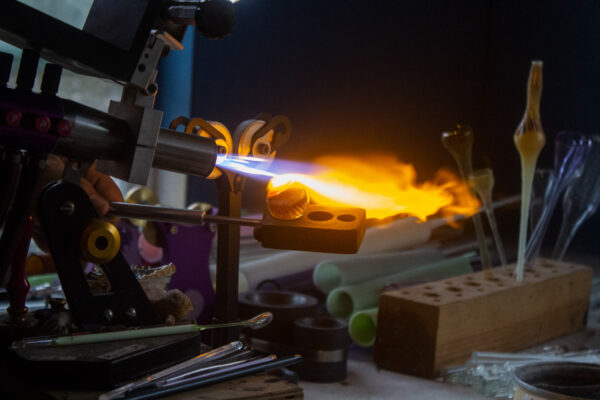 Justin Parr makes a marble in his San Antonio studio

I ascended the stairs, past his dog Parsley, cat Taco, and a stray peacock that relocated here from across the San Antonio River. At the tree level, Parr was firing a large marble with a torch; it was nearly done. It glowed red, which is misleading — after annealing in the kiln at 1060 degrees Fahrenheit, it will “strike” to blue, Parr said. 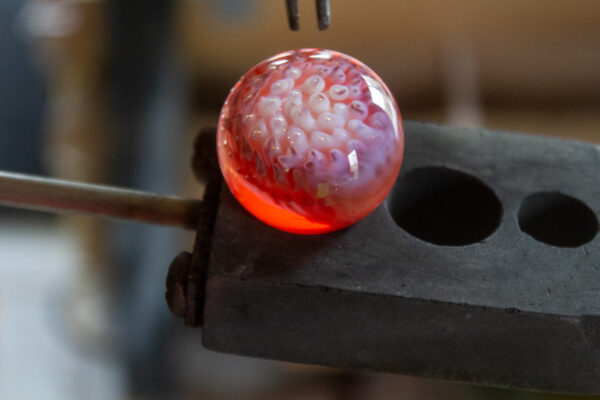 Parr’s marbles grew out of his interest in the medium of glass. He uses a lower-temperature tabletop way of working with hot glass, called lampworking, or flameworking. This technique uses a tabletop-sized torch to manipulate smaller, preformed rods of boro-silicate glass. It allows for the manipulation of proportionately small objects, like beads and figurines. Most people think of glassblowing as requiring an active stance, a process that includes blowing bubbles into a large furnace. Unlike the pared-down method that Parr uses, this type of glassblowing would require large furnaces, more fuel, and lots of implements.

The marbles Parr makes are collectible, but in a less traditional sense than you might imagine. He organizes hunts, where his pieces are hidden and photographic clues are posted online for people involved in the search. The hub for these photographic clues is a Facebook group, “Esferas Perdidas,” which Parr co-founded with glass artist Sean Johnston. As an online community of marble hunters, it has grown to over 8,000 members, and is no longer just a San Antonio phenomenon. He’s seen crowds of up to 20 people arrive at a hunt site minutes after his photos were uploaded to the internet. Johnston and Parr are currently exhibiting their marble work in a more traditional setting — the Galveston Art Center — through February 13, 2022.

Parr has a background in commercial photography, but his interests have shifted over the years. He has run Fl!ght Gallery out of the Blue Star Arts Complex since 2001, putting on a new show every month for over 20 years. The pandemic put a pause on that, which gave him enough time to catch his breath and reflect on how to balance his time. I asked him what significant changes the paradigm shift has had on him and his practice. He responded: 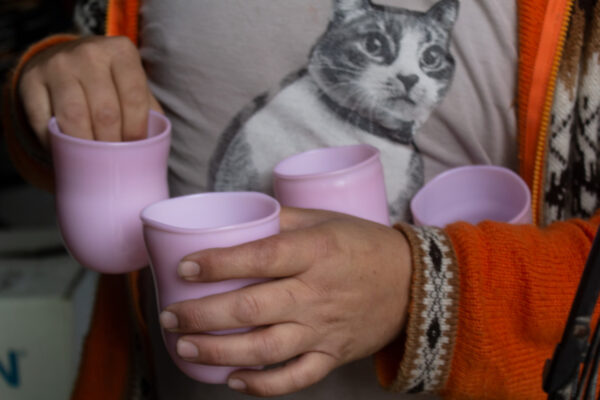 Parr opened a cabinet downstairs at his live-work space and, sure enough, there were many cups, each made by hand at his lampworking station, a process which he tells me leaves little room for error. These specimens are not perfect, so they are back stock without an exhibition or sell-by date. The catalogue of  work in this cabinet alone suggests that Parr has the leeway to try out many forms of cups. Glass is labor intensive and literally fragile, so this ease of mind is the mark of a glassworker who has achieved relative mastery of the medium. Parr’s timeline corroborates this: he says he switched from commercial photography to being a full-time artist about ten years ago. Parr continued to narrate his relationship to glass:

“I had some friends that were blowing glass, so I was exposed to it. Glassblowing is a craft, and most people that are doing it are very craft oriented. The people I knew who were glass blowers were absolutely perfectionists. I am not a perfectionist.” 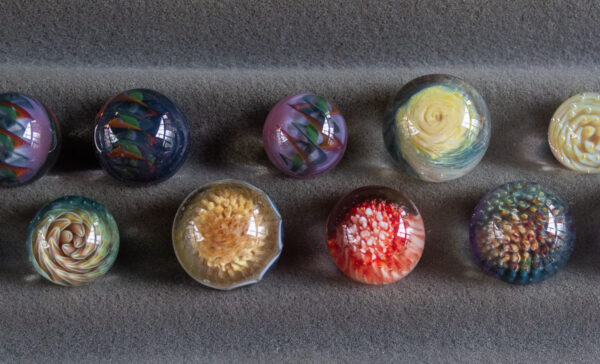 He revealed a case of marbles, a couple of which were cracked. Another specimen, this time of a drinking glass, showed a similar dynamic of technical prowess with less than perfect shape: a “sleeved cup,” meaning one set of color had to be laid on the other during the lampworking process. Making the cup is a feat of speed because glass cools very quickly, and sculpting a form with two different colors maximizes the amount of surface area that needs immediate attention. Parr’s cup is wavy and squished, less upright and more relaxed. He reminded me that all of his best stuff isn’t currently in the studio, it’s on view at the Galveston Arts Center. There, he’s showing marbles made alongside collaborator Sean Johnston, and viewers can see the full range of marble styles the two have been working on as a part of Esferas Perdidas.

Interacting with Parr’s objects only reveals one side of his practice. Aside from running Fl!ght Gallery, he has coordinated Flight Camp, an annual summer event for makers which happens in the woods next to his studio. A group of artists come to Hot Wells Park and camp out for a week, separated into factions, where each camp works towards a common goal: to make something. More recently, Parr has developed programming with Jeff Wheeler, a recent San Antonio transplant, for a semi-monthly performance series at Echo Bridge. The performances have dabbled in visual presentations, such as the video projections that accompanied A.M. Architects’ set, but they are always aural delights. A performance in October of 2021 by Santiago Jimenez, Jr. was recorded by a PBS travel production and is slated to premiere in February.

Parr’s ability is rare. For an artist to cross mediums as well as exhibition formats with success is not something that every creative is able to tap into. It’s also indicative of his investment of time — over 20 years — in San Antonio’s art community. If there’s anything that speaks to an artist’s tenacity, it’s how long they continue on in a place of their choosing. When asking Parr about his transition from photography to glass, he stated, “It was never intentional.” Thumbing through Parr’s studio of glass experiments, one would never guess as much.

Justin Parr, Sean Johnston and Friends: Esferas Perdidas is on view at the Galveston Arts Center through February 13, 2022.

The Gallery as the Bar: Amada Miller and...