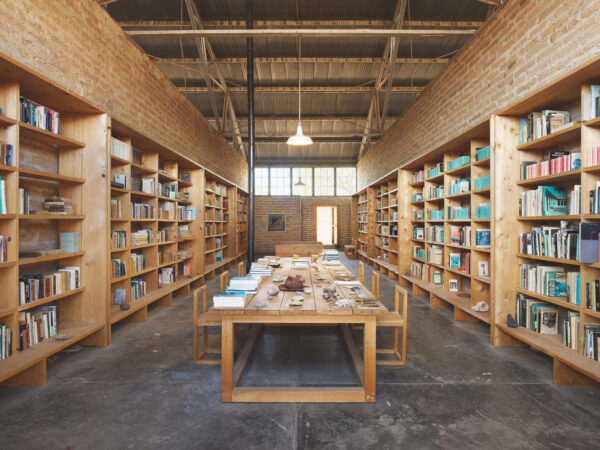 The Carl & Marilynn Thoma Foundation, a private foundation that supports various art-related initiatives across the United States, announced yesterday that it has given the New York and Marfa-based Judd Foundation $60,000 in support of the organization’s Donald Judd Library Project.

For the project, the Judd Foundation plans to photograph the shelves of its library buildings in Marfa, and will eventually build a “robust digital
viewing platform for the existing catalog” of publications, which will, according to the Thoma Foundation’s announcement, allow “users to freely browse or conduct targeted searches.”

Visitors to Marfa can see Judd’s massive library of over 13,000 books at La Mansana de Chinati/ The Block, the artist’s former home and studio compound in the town. The collection is broad and was uniquely cataloged by Mr. Judd, and covers everything from art to science to natural history. However, on tours of the complex, visitors are restricted to specific areas of the artist’s libraries — they’re not allowed to browse the books or walk between shelves.

The Donald Judd Library Project intends to open the artist’s library up to digital visitors across the world, and also serve as a sort of prototype for how other institutions can deal with similarly inaccessible archives and collections.

In a press release about the project, Rainer Judd, President of the Judd
Foundation, noted: “Don’s library provides a deeper understanding of his work and the lens through which he viewed the world. Through this generous support, we are able to again share this treasured resource.” Holly Harrison, Director of the Thoma Foundation, said: “At the Foundation, we seek to honor the value of rural places and people, and to help them share their stories. This grant does exactly that.”

Each book cataloged will be linked to the WorldCat catalog system, which can direct interested individuals to local, physical copies of the publication. According to the Thoma Foundation, “This searchable online catalog will serve as an essential tool for Judd scholars across the world by making a remote collection easily discoverable.” The project is expected to be completed in 2023.