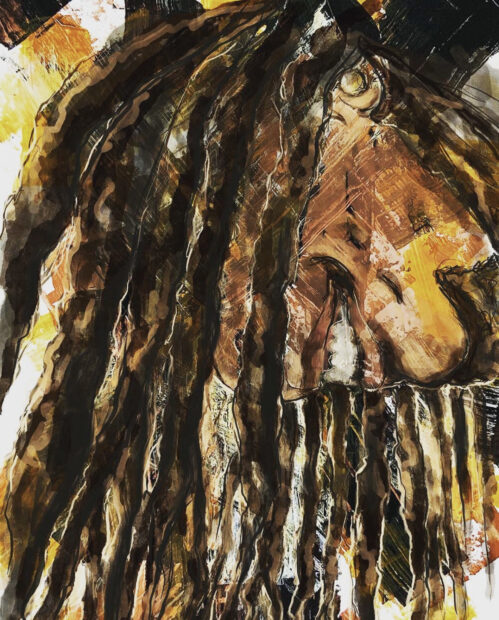 In Drawing Conclusions, on view at Northern-Southern in Austin, artist Tyeschea West offers up ten colorful photographic paintings that create a sort of double exposure of what is known and what is felt about the individuals in her work. People have different layers, and so do West’s portraits: each one begins as an abstract watercolor, overlayed with a photo of the subject, followed by a clear top sheet on which the photo is traced and painted. Set in an inch-deep frame to create a lightbox effect, the work retains a translucency and poetic obscurity that’s most fully appreciated in person.

West tends to connect with her subjects, something we see in this show as well as a previous Northern-Southern project, Where Is Here (2020), in which she helped photograph 100 folks from East Austin, aged zero to 100. Like that earlier project, the works in Drawing Conclusions invite a warmth and openness, as if each portrait is a piece of the conversation between herself and the person sitting before her.

Yet unlike the black-and-white photographs from Where Is Here, the works in Drawing Conclusions are driven by vibrant color schemes. Where there is peace, happiness always follows shows some happy soul with a golden flow of dark dreads. In Why?!! a small boy is awash in rich greens. 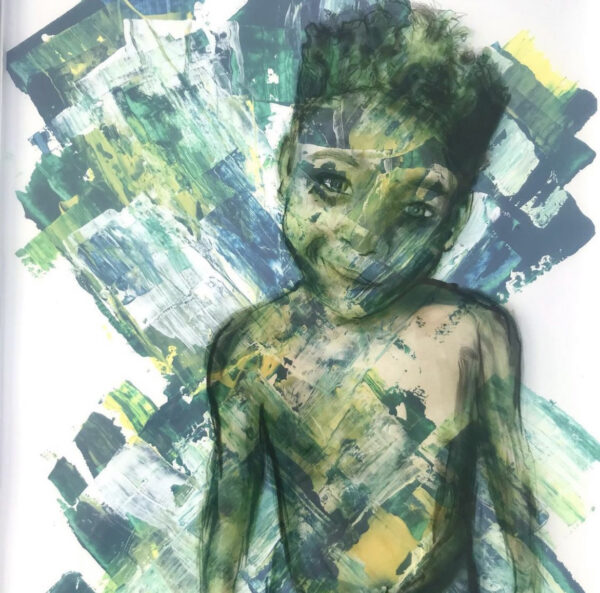 Rather than use titles, each portrait comes with a quote from (or about) the subject. West interviewed three of the individuals in the show, but the others are based on images she found online; they’re faces that spoke to her in some way, and words she ascribed to them, to fit what she felt they might say if given the chance. All the places I have been have become a part of me in some way features a bright-eyed woman wrapped in a swirl of soft pinks.

“Each abstract painting had an effect on what portrait I would use — I decided on the feel of the painting, and then the personality would go with it.” 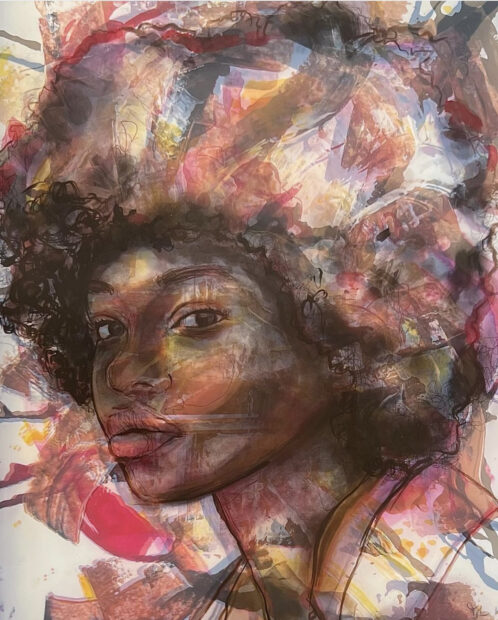 Tyeschea West, “I have to remember, I’m more than enough, even if most of society has been brainwashed into believing differently,” 2022, photography, acrylic, watercolor, film, 11 x 14 inches

One painting in particular, she notes, came out quite distressed, with its thickly applied acrylics and watercolor blues; West matched it with an image of a young man whose face is buried in his hands. Pairing a personality with a painting is an exercise in empathy as much as imagination, an attempt to capture a certain feeling or mood that she not only connects to as the artist, but hopes the viewer will connect with, too. That’s where the layering really comes in: by peeling back that outermost image of the portrait, we’re left with the abstraction of emotion, a palette of color that has come to represent the person in the picture.

A standout in the series is of a woman in her 20s or early 30s surrounded by an aura of umber and mauve: I have to remember, I’m more than enough, even if most of society has been brainwashed into believing differently. The woman is based on one of the images West found online, a stranger who now suddenly seems familiar: “I just wanted to know more. That’s what drew me to her and the others. I wanted to be able to put my own version out there and dive more into what I’m gaining from seeing.” 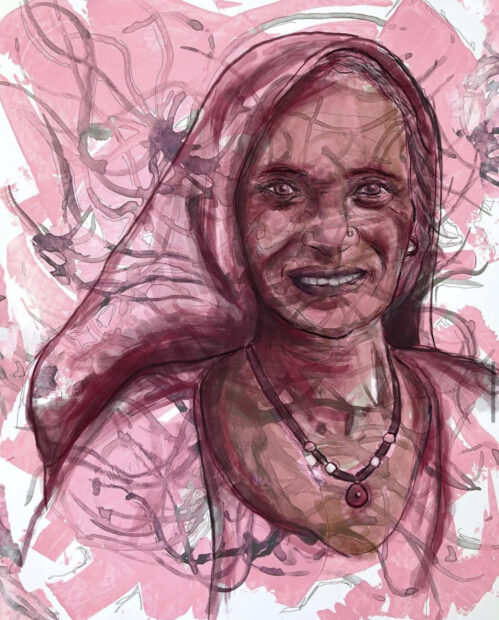 Tyeschea West, “All the places I have been have become a part of me in some way,” 2022, photography, acrylic, watercolor, film, 11 x 14 inches

West, who is a full-time interior design photographer, says that being detail-oriented and “picky” actually lends itself to this kind of layered portraiture. Her profession involves ensuring that everything is exactly in its right place — the opposite of the abstract playfulness and curiosity she puts into her photographic paintings. But in a way, these ten works are interior snapshots as well, getting at the inner life of the individual, real or imagined, and showing us something of ourselves.

“When you’re photographing you see certain things — everything has to be perfect,” says West. “We don’t notice how messy things are but the camera sees everything.”

Tyeschea West: Drawing Conclusions runs through June 12 (and then June 18, by appointment) at Northern-Southern in Austin.