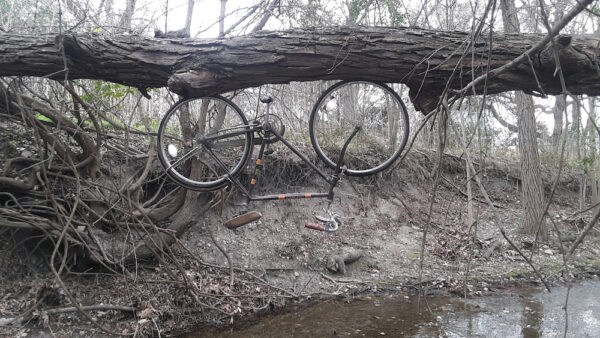 Work by Ted Carey. Images courtesy of Northern-Southern and the author.

Northern-Southern in Austin has done it again, with another venturesome multi-artist show spread out across the city. TO is number three for the gallery — the final installment of a trilogy of outdoor art shows, organized in response to lockdown. Featuring a dozen site-specific installations hidden in plain view, TO is a hightail out of a low year, as a new Lunar year kicks off.

As we leave the Rat behind (the zodiac sign, of course), we look to new beginnings with the Ox: honest, hardworking, reliable. A year of building is upon us, says Northern-Southern’s founder-director Phillip Niemeyer. TO is a conscious effort to examine the path, where motion itself becomes the art: “Most of these works don’t just exist in one spot, they exist in a vector cloud of sorts.” 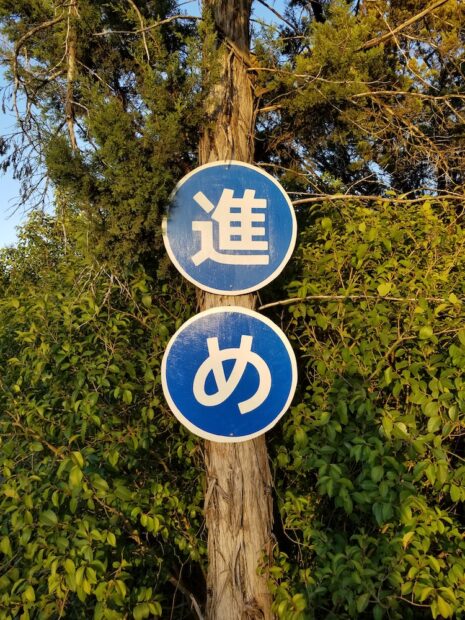 That cloud, at times, blends digital with astral, creating a shared asynchronous experience among its participants. Put more succinctly, TO is a scavenger hunt. Niemeyer clearly enjoys fuzzing the lines of art and non-art with these diffuse outdoor shows. Who cares if it’s a bit pejorative, he laughs. “Ulysses and Goodnight Moon are both books, after all.”

In Alyssa Taylor Wendt’s Mnemonic Mapping Project I-V, an overly soothing voice ushers you on an audio tour through East Austin. With five mapped points along a “neural landscape of reflection,” Wendt’s MP3 offers information about each physical locale along with a metaphysical musing.

Sean Ripple’s cine-drift indicator is an audio-assisted “jogging event,” occurring every other morning at the same time for the duration of the show. Inspired by the film Marathon Man, the activation involves a sound collage, emailed prior to each hourlong event, as a way to tether a phantom fleet of runners. 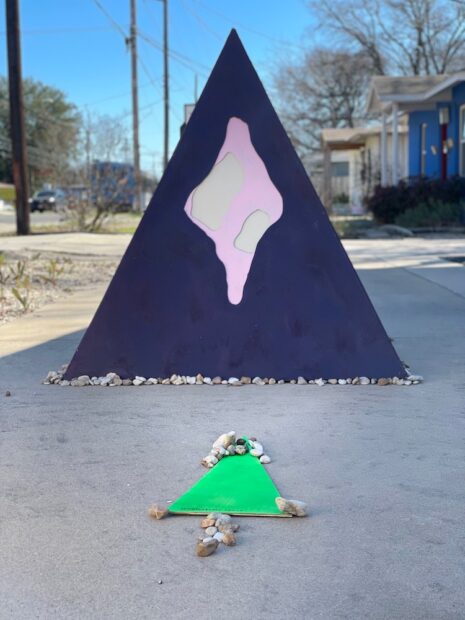 Zoe Berg’s Spectacles is a set of eight postcards, quietly placed along Shoal Creek Trail, containing QR codes to various video poems; little secrets unbeknown to those walking by with their dog. Staci Maloney and Michelle Smolensky’s Temple of RAIN is a modest roadside pyramid which invites the viewer to cultivate self-compassion via online mindfulness tools.

Making art and seeing art can be a meditation, says Niemeyer, and this is a good time to meditate. In a way, the show is a prompt for both the viewer and the artist to consider the moment we find ourselves in. What moment is that, I ask him? “We’re going to pop out of the pandemic and things are gonna be crazy.”

There is plenty of physicality to offset the ephemeral in TO. Movement is the preferred medium. There are no shortcuts — walking for more than an hour may be the only way to get there. Embarking as a motivated flaneur is mostly the point. 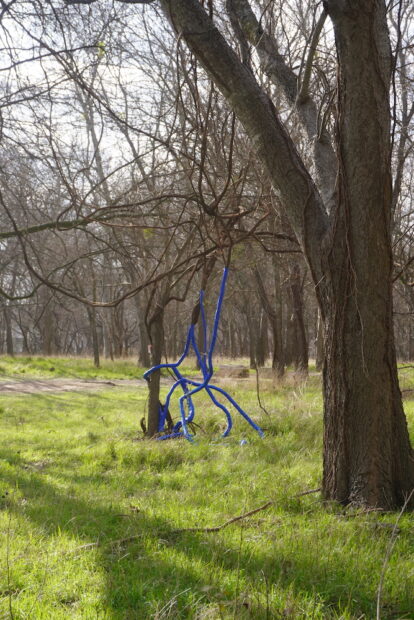 Amy Scofield and Lisa Hallee’s Xyloglyphs feature 10 interventions along the wooded route of a busy disc golf course. Bright tape wrapped around thick vines forms sculptural “messages” easy to spot once you know what to look for. Each one builds momentum until finding all 10 becomes at least as gratifying as winning a game of disc golf. 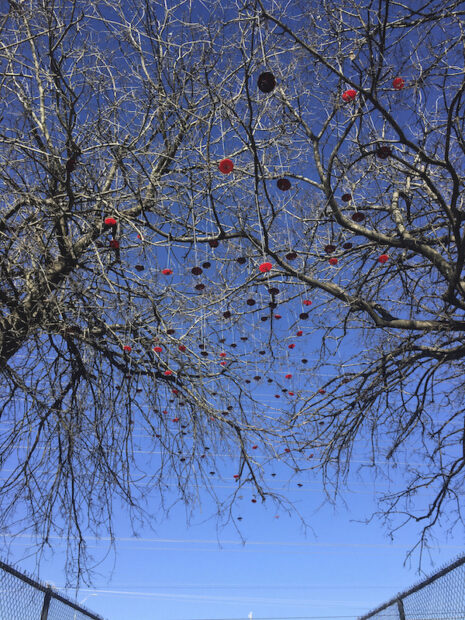 Ted Carey’s Thoughts unsaid, then forgotten is a bicycle naturally camouflaged above a hard-to-reach creek (pictured at top). Laura Latimer’s Chasing Toto clacks in the trees overhead. Tammy West’s tinctures of water and sunlight hang from a single branch like minuscule bar chimes. Adreon Denson Henry’s Sorry We’re Closed is a strand of bricks stretched out on the grass of a neighborhood triangle. Chris Lyons’ signs near Mile 6 of Walnut Creek Trail may go unnoticed by cyclists unversed in Japanese. (Translation: “Proceed Onward.”) 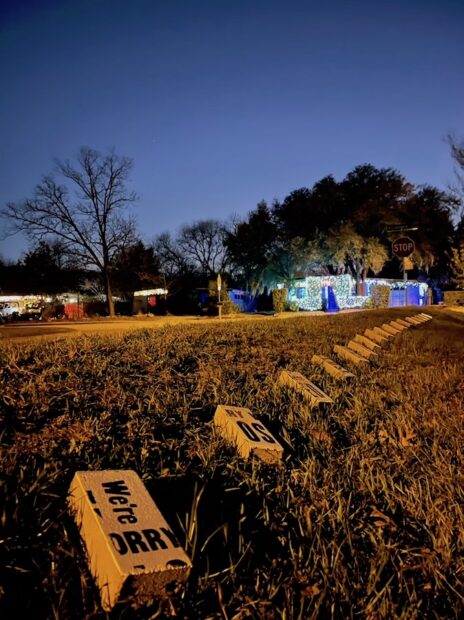 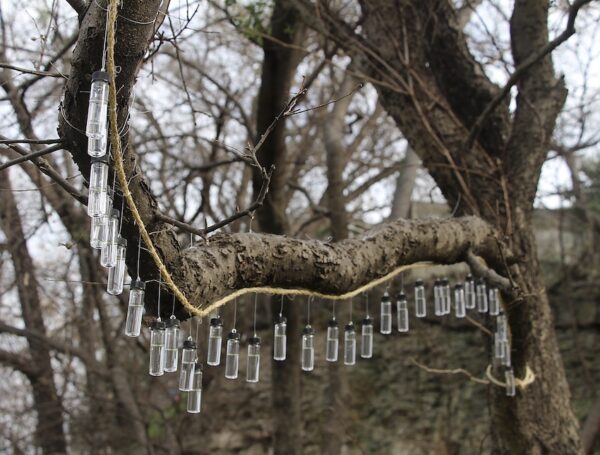 Emma Hadzi Antich’s You will/you will is an off-trail expedition into the Underworld — a Sibyl box, mounted under a railroad bridge, complete with paper prophecies. Pull the slip and clip your fortune with a pair of golden scissors. You will gain lonely resolution despite bearded fascists materializes from the hand-painted wooden case; words scrambled by code and reassigned new meaning. These fortunes come from wishes collected in a previous life. 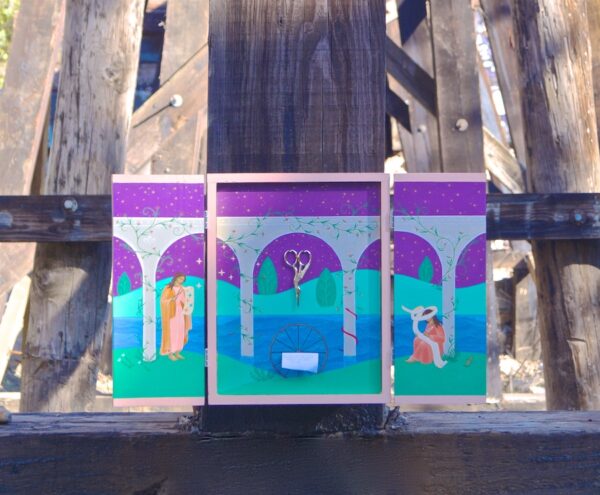 TO is an energized next. What Niemeyer calls the pause before the lurch. Northern-Southern’s earlier outdoor group shows mirrored other moments in the pandemic. Last May, Left in Leaves traced a trail of breadcrumbs through an isolated world. In August, No Outlet sought options where there were no options, only metaphoric cul-de-sacs. 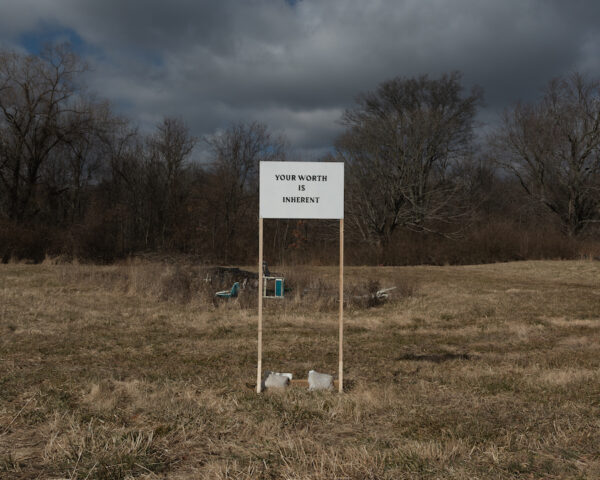 But things feel very different now. Pretty soon, we’ll need to redraw the map again. TO’s most memorable piece isn’t in Austin at all. Amanda Julia Steinback’s Subliminal Blessing features four mini billboards along a muddy farm road in Southern Indiana. Its messages intend to heal a community struggling with fear, isolation, and “false feelings of scarcity” — all of which, the artist states, play into broader toxic systems of inequality. What we didn’t see coming. That part of the map where the dragons reside.

‘TO’ runs until February 27. For more information, please visit www.northern-southern.com.