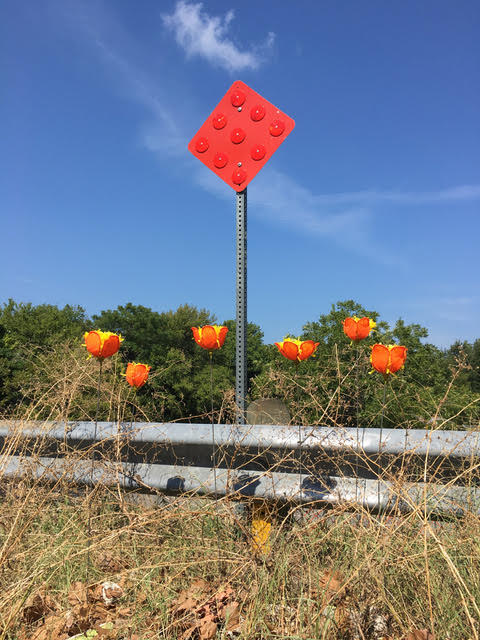 Northern-Southern’s latest group show turns the city of Austin into a gallery — and dead ends into distinct possibilities. With 14 installations hidden in plain sight across the city, No Outlet is part exhibit, part experiment, part excuse to get out of the house.

“I was noticing all of these ‘No Outlet’ signs while out jogging, and I thought it was an interesting trope, the city as text,” says Northern-Southern gallery owner and director Phillip Niemeyer.

Niemeyer, who much prefers swimming to running, hasn’t been in a pool in months. His new outlet prompted No Outlet. Even at the end of options, he says, there are still options.

This is not Northern-Southern’s first pandemic-friendly rodeo. In May Niemeyer curated Left in Leaves, a rolling exhibition of outdoor interventions which popped up over a period of four weeks. No Outlet is instead a mapped itinerary of environmental art installations which shall remain an “active concern” until September 22. (He plans to run a third and final variation on this theme later in the fall.) 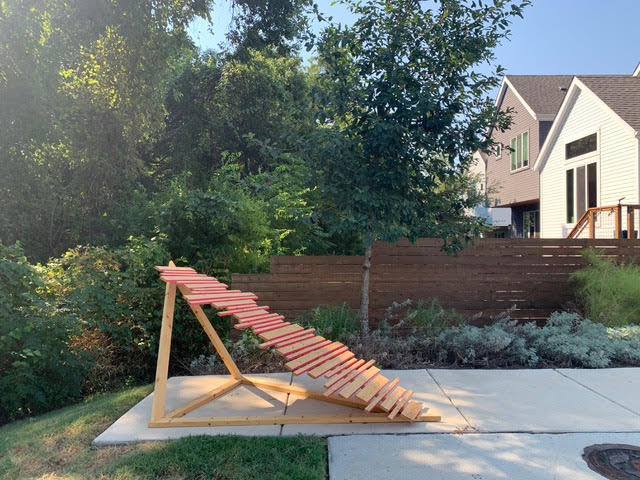 Thirteen local artists are participating in No Outlet, with a bonus track from Rachel Freeman and Niemeyer himself. Each installation is an exercise in urban immersion, with some sites easier to find than others. (Don’t forget to subscribe to the map.)

But nothing is promised as you move along these points of interest. Saul Jerome San Juan’s plein air painting, for instance, is a spontaneous occurrence. And Tammy West’s dry-creek dependent Natural Healing transforms into a kinetic installation titled Flow should it decide to rain.

“It’s a dispersed gallery experience,” says Niemeyer. “Being in a state of appreciation of each object is the goal — not the piece itself.”

In the annoying U-turn of life, ‘No Outlet’ signs rarely elicit a state of appreciation. This is part of the process, he assures me. It’s an opportunity to break from tradition and reimagine what a gallery can be.

So can a gallery be illegal?

“We didn’t get permission from the city,” he clarifies. “This is all environmental guerrilla stuff — if we need to move it, we will.” 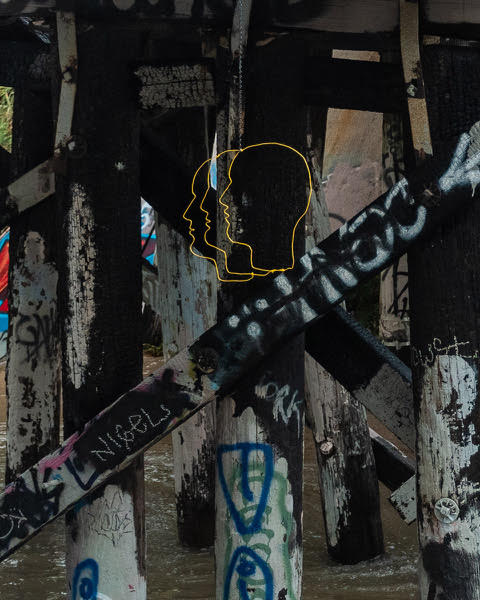 Amanda Julia Steinback, The Choir, The Calendar, and The Continuer (2020)

At times No Outlet feels a bit trespass-y, but that’s what makes it fun. Amy Scofield’s Serendipity is a happy secret hiding in a storm drain. Amanda Julia Steinback’s The Choir, The Calendar, and The Continuer dangles from an out-of-the-way railroad bridge. Mai Gutierrez’s PP01 sits squarely on a sidewalk next to someone’s backyard. (Wave hello to the nice lady on the deck.)

Along the way you will encounter roosters and remodels, pricker bushes and piles of used mattresses. And because you are on a quest, far from the confines of Covid, it will all feel strangely exotic. 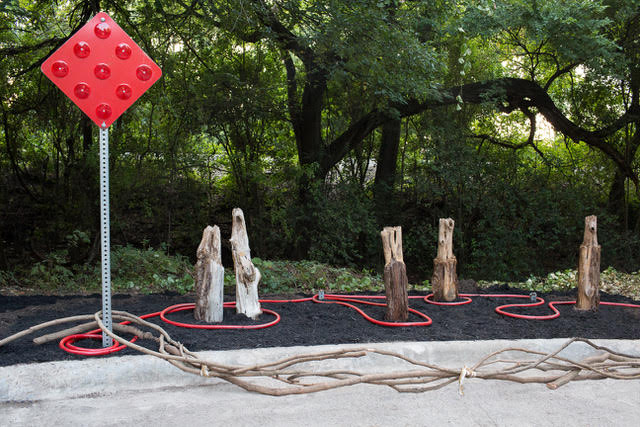 Leon Alesi, Ancestors at an Impasse: The Personification of Transformational Freedom (2020)

Laura Latimer’s Micro-Enclosures (see top image) adorns a dead end with a display of fake flowers which hardly look out of place in the tall parched grass. Sean Ripple’s a thieves’ tunnel through the tomb of time is the most minute intervention in the show: a penny hidden in some fallen leaves on a traffic island in North Austin. A tiny url scratched onto a piece of Scotch Tape takes you to some complementing audio/video content. Leon Alesi’s orderly arrangement of cedar posts blend into his dead end, a quiet cul-de-sac in Bouldin Creek. Ancestors at an Impasse: The Personification of Transformational Freedom is made of salvaged wood from neighborhood houses which have since been demolished. Bungalows overtaken by Bauhaus.

I ask Niemeyer, who is originally from San Antonio and spent years living in New York City, if he thinks the money pouring into Austin means good things for its art scene. There’s a ceiling, he says, with someone like Deborah Roberts being the rare exception; she had to leave home to get recognized at home. The local art scene, Niemeyer shrugs, has never been particularly hospitable.

“We’re all weeds here, and we’re cool with that. As long we’re able to make something beautiful.”

There is indeed something very sweet and joyful about the scavenger hunt that is No Outlet. Each installation is a contactless hello, a little reminder that we’re all still here. Alone together. 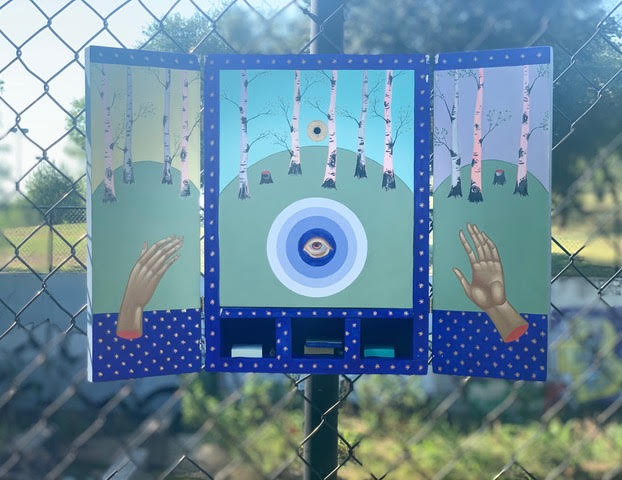 Emma Hadzi Antich’s What is Wished For perfectly exemplifies this sentiment — an unassuming grey box on a chainlink fence in a field out by the old airport. It opens up into a hand-painted triptych governed by an all-seeing eye. An altar which offers its worshippers a sticky note for wishes and a pencil for dreaming; our fears and fomites together at last.

No Outlet is a sign of the times. Don’t despair if you feel a little lost. Even the map has a question: Isn’t it nice to think that when we’re fossils we’ll all be in the same thin layer of rock?