Impractical Spaces, a collaborative national project launched in 2020 to document artist-run spaces through city-specific books, has partnered with Pete Gershon to publish a Houston edition highlighting over 50 spaces, past and present. 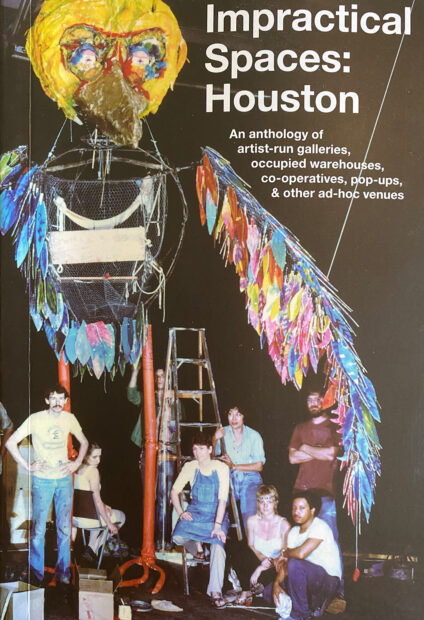 Since its inception, Impractical Spaces has launched five books chronicling artist-run spaces in Puerto Rico; Washington D.C.; Portland, Oregon; Grand Rapids, Michigan; and Kansas City, Missouri. The long-term goal of the organization is to publish at least 50 books — covering at least one city in every state in the U.S. In the end, the hope is to then assemble the publications into a larger book that tells a national story.

For the new Houston publication, Mr. Gershon, the author of Collision: The Contemporary Art Scene in Houston, 1972- 1985 (Texas A&M University Press, 2018), penned a gripping introduction which takes the reader from the late 19th century Houston art scene to the present, while providing important cultural context. The publication includes chapters on organizations that are no longer active such as Chicano Arts Gallery (1976-1978), Equinox Theater (1976-1980), and Zero Alternative Space (1980-1983), as well as organizations that are still operating today like Box13 ArtSpace (2008-present), The Orange Show Center for Visionary Art (1982-present) (where Mr. Gershon now works), and Project Row Houses (1993-present).

The book’s introduction states that while the project’s organizers used a broad definition of “artist-run space” to include organizations that have grassroots foundations but have since become more established, they did not include commercial galleries or restaurants/bars that hosted art events. Additionally, organizations who were not included in this publication are invited to reach out and share their stories to be included in future editions of the book.

It is also available from me (one of its contributors)., if one wants a copy that doesn’t involve one getting off the couch.

This is only partially true.

I ordered one from you and I had to get off the couch to get my order from the porch.

But I’m back on the couch now.