You know the American archetype of the cowboy — yeah, that guy — the one whose iconography has been reduced and commoditized until his essential cool is blander than prime time TV? The image and mystique, filtered through contemporary art processes, have produced confections ranging from the atmospheric magic of David Levinthal’s polaroids of Wild West toys (love ’em), to whatever the heck it is that Richard Prince is doing with cowboy imagery appropriated from advertising and popular culture (meh, not so much).

The real deal, of course, is so much more interesting and also elusive. But two photography exhibitions in San Antonio go there and beyond with frontiers of ease. Vaqueros de la Cruz del Diablo: Contemporary Photography of the Northern Mexican Cowboy at the Briscoe Western Art Museum presents sixty large-scale images by Werner Segarra that depict modern yet timeless iterations of the original cowboys. (Yes, the prototypes for our rangy, tougher-than-leather symbols of American independence were Mexican. Without vaqueros crossing the Rio Grande, there would have been no Lonesome Dove.) At Ruiz-Healy Art, Four Visions: Carrington, Limas, Salcido, West includes images redolent of the origins and the continuation of ranching and cowboy traditions in Spain, Mexico, and the American West.

A native of Puerto Rico and current resident of Arizona, Werner Segarra was born to a Puerto Rican father and a German mother, thus his bicultural name. He was first drawn to the American West at age eight, through reading the novels of Karl May* while visiting his grandmother in Germany. In the 1980s, as an Arizona teenager, a cultural exchange program at his high school sent him to the village of Huásabas in the Mexican state of Sonora. There, a new world opened up.

In love with the Sonoran people and the wild, mountainous terrain, Segarra returned to the area throughout high school and afterwards as he became a photographer. His decades-long project documenting the people, lifeways, and natural environment of the region could not have been accomplished had he not earned residents’ trust through repeated visitations. Segarra’s remarkable portraits capture Sonorans’ enduring, homespun faith, incessant embrace of long hours of hard work, and unbridled joy in the celebrations of life. There’s a stoic acceptance of the tragedies of existence, and a profound dignity amidst humble circumstances.

The uncommon size of Segarra’s images — most are 44 by 56.25 inches — often allows one to feel as though a fourth wall has been dissolved. This sense is especially operative in the images of interiors, kitchens, bedrooms, and living spaces: we step inside and smell the warming tortillas, adore home altars and religious artifacts, and nosey around cinder block and adobe walls, stark furnishings, and personal mementos. We savor the strong sense of place etched into faces.

Vaqueros, both young and old, along with a few young vaqueras populate many of the scenes. Their hats, boots, chaps, ropes, saddles, guns, and spurs are emblematic yet strikingly real. Some gaze out through open doors; we wonder what they behold, and many of the images answer that musing with majestic thousand-mile longings. “Great craggy stone terraces are piled up one upon the other on sharp-cut mountains that seem to float in the burnt sky over wide yawning canyons,” writes San Antonio’s living cultural landmark John Phillip Santos in an essay for the exhibition. “The vast vistas are awe-inspiring…”

In a catalog essay, Sonoran anthropologist Ernesto Camou Healy observes that the vaquero way of life is changing in this part of northwest Mexico due to cattle-breed shifts, agricultural trends, and young peoples’ migration to the region’s towns and cities; one might even say these lifeways are endangered. Segarra’s image of a young cowgirl provides a lighter example of cultural change. Named Siria Guadalupe Duarte Anguiano, her shortened name, Siri, is for the computer age’s built-in, voice-controlled personal assistant. If visiting the show, I’d recommend you truly spend some time examining Segarra’s images, and his three videos of Sonoran vibrancy accompanying the show. 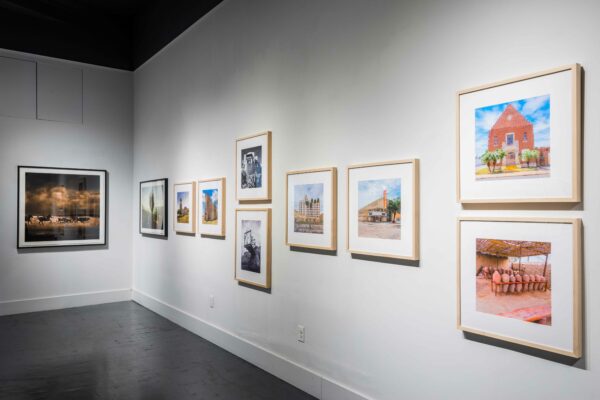 Four Visions: Carrington, Limas, Salcido, West at Ruiz-Healy Art rounds up work by Texas-based photographers Rahm Carrington, Carlos Limas, Tito West, and Joel Salcido. Carrington’s images explore a charreada, or Mexican rodeo, an event that predates the American rodeo. The event is produced by the Asociacion de Charros de San Antonio, which NPR says is the largest and oldest charreada association on this side of the Rio Grande. Carrington’s C-type prints detail the performers’ traditional charro costumes, echoing pastimes south of the Rio Bravo. A rope spinner dances through his whirling fiber in the center of the arena, and sombreros absorb the melting kisses rained down from the sun. 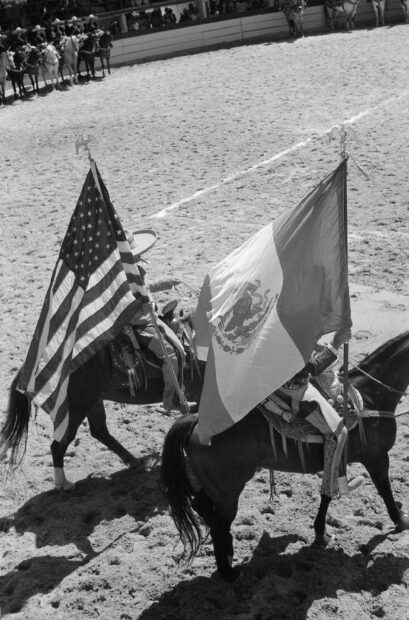 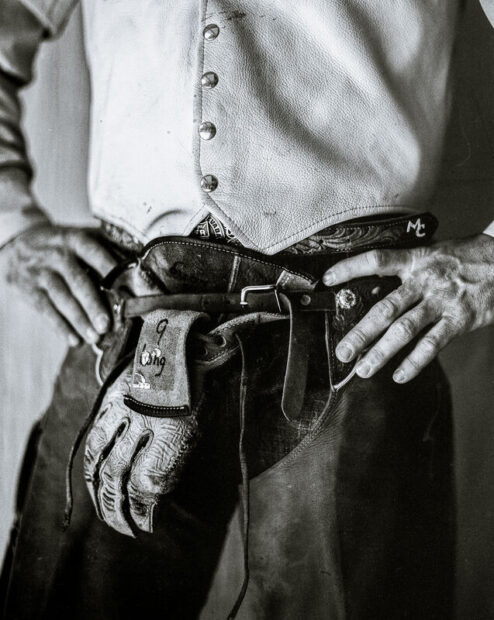 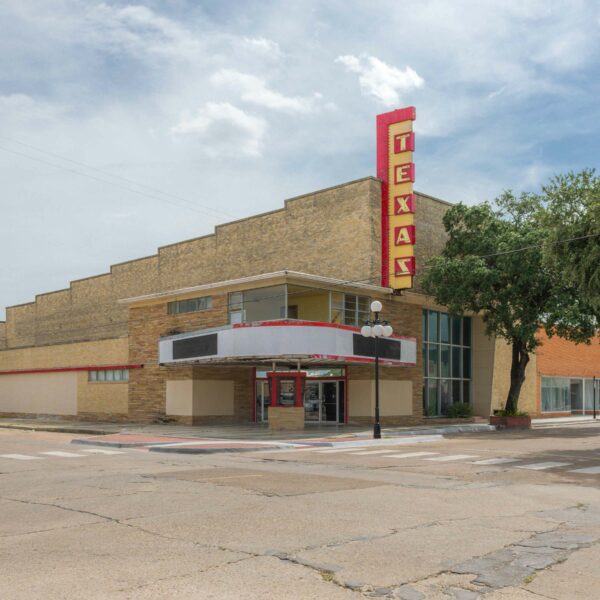 Carlos Limas‘ contributions to Four Visions detour from the cowboy traditions, but speak nonetheless to the wisdom of the old ones still among us, including that silent wisdom found in things, ancient structures, and stories of times long gone. Chapel ruins in Donna, Linn, and La Feria; an abandoned movie theater in Kingsville; a slumbering hotel shell in Brownsville. All are drawn from Limas’ Stillness series. I have kind of a fetish for old hotels, and Brownsville’s El Jardin, and the kaleidoscopic efforts to restore it, have long intrigued me. I even have a 1951 book, Hopping on the Border – The Life Story of a Bellboy by Matt Thomas, that tells some of the hotel’s story, along with that of Thomas’ time on the vaudeville circuit. I never tire of driving through downtown Brownsville and admiring the singular architecture, including this ghostly hotel. 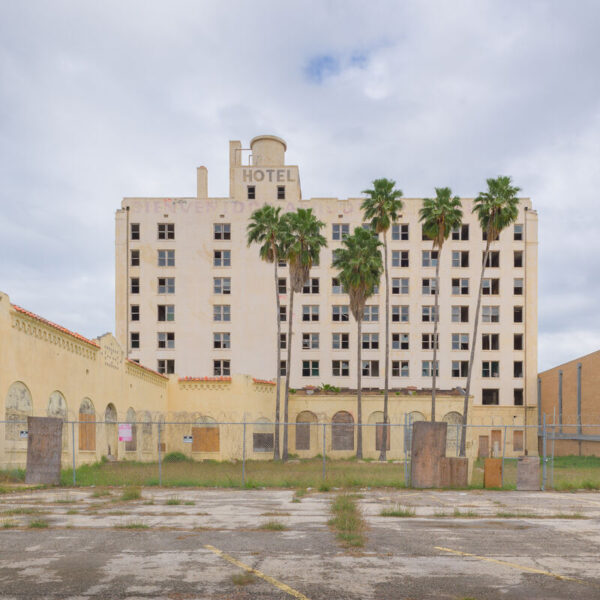 In addition to selections from his acclaimed tequila series (including Atotonilco El Alto, an image that has been inducted into the National Art Heritage Collection of Mexico and also served as the poster image for the Texas Book Festival), Joel Salcido presents the 44 by 44-inch archival pigment ink print En El Tiempo Del Quixote. Captured in Spain in 2002, the image and its print evoke Old World ranching traditions, and also chart the journey from analog to digital image-making. As Salcido explained to me in a recent interview, the photograph was taken from the back of a moving pickup on a ganaderia (a cattle farm or ranch) near Salamanca, with a Hasselblad medium format film camera loaded with twelve exposures. “I had to hope,” he told me, “that one of the twelve would come out okay.” 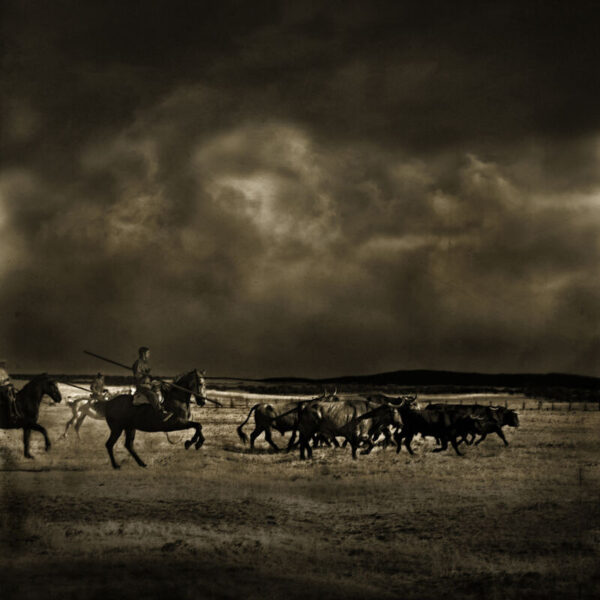 The photographer was only allowed limited access to the ganaderia and their brave bulls, for fear that his and the truck’s presence would spook the sensitive animals and result in some unpleasant actions. “The wooden lances you see the picadores (horsemen who use the lances to control bulls) carrying are called garrochas, and they were a forerunner of the lasso and used control the bull’s movements,” Salcido explained. “But it was incredibly beautiful to see them move — the horses knew the movements of the bulls and they were so well-trained. It was like a surreal athletic dance between the horsemen, the horses, and the bulls.”

Feeling fortunate to have captured one good image out of the twelve, Salcido made a few silver prints in a wet darkroom, burning and dodging through acetate airbrushed templates to achieve his desired effects. Then, after the digital revolution, he scanned the negative and began adding layers of distress and texture using Photoshop. He printed the final photograph that appears in Four Visions at Peter Williams’ fine art AgavePrint shop in Austin.

“I approached it the way a painter approaches a canvas,” Salcido explained, “adding textures, darkening the sky, and distressing parts of the image. The digital process and Photoshop greatly increased the creative possibilities.” I’ve not yet been to Spain myself, but I find a universe of Old World soul in Salcido’s photograph. 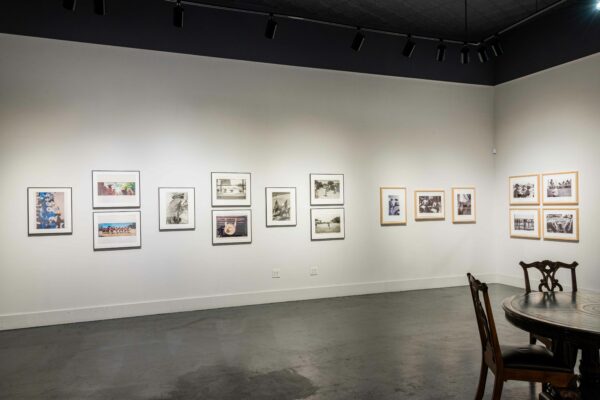 Vaqueros de la Cruz del Diablo: Contemporary Photography of the Northern Mexican Cowboy will remain on view at the Briscoe Western Art Museum through January 24, 2022. Four Visions: Carrington, Limas, Salcido, West at Ruiz-Healy Art will be up through November 6th. Additional images in Joel Salcido’s tequila series can also be seen in his 2017 book, The Spirit of Tequila.

*I recently splurged on a copy of one of my favorite art books, I Like America – Fictions of the Wild West (Prestel, 2007). Serving as the catalog for a massive exhibition about Germany’s fascination with the American West, the book explains that even though he never traveled to the West, Karl May’s Wild West stories, which first appeared in 1875, made him Germany’s best-selling fiction writer of all time. “Nearly a century after the author’s death, May’s perennially popular works have been adapted into theater, film, and other media, and the countless editions of his books are thought to total over 100 million copies.”