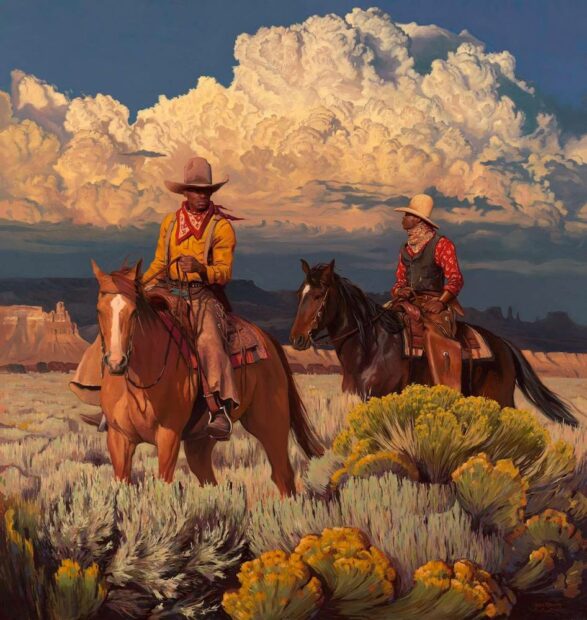 Larry Callies’ Black Cowboy Museum in Rosenberg, Texas was ahead of its time by about two years. Callies was told by local media ahead of the museum’s 2017 launch that the name would rub people the wrong way. A 2019 New York Times profile proved them wrong, spurring busloads of people from the Houston area and beyond to visit. That same year, TikTok rapper Lil Nas X’s country-chart-cracking single “Old Town Road” emblazoned the image of the Black cowboy indelibly into mainstream American consciousness. Commenting on the enthusiasm he’s seen among young students and other visitors who’d never heard of Black cowboys, Callies says: “I knew I was on to something.” 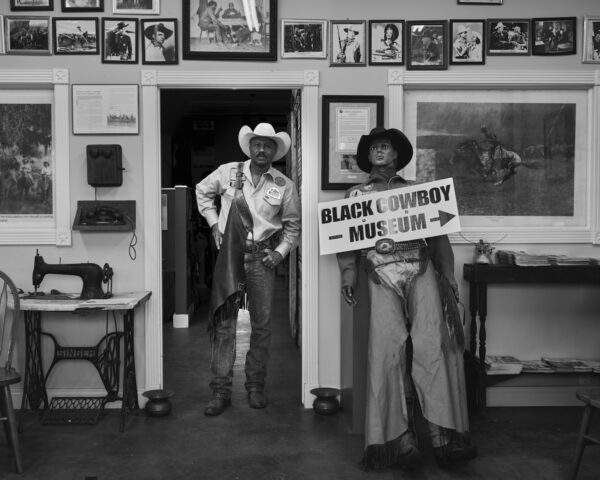 Callies himself is a fifth-generation Texan cowboy. His museum includes a carving by one of the two slaves initially brought to Rosenberg, as well as a Plantation Police Badge from 1858 — a relic of the policing system’s origin in slave patrols. After the Civil War, ex-slaves were hired as cattle drivers: hard, hazardous, but steady work. In the 1950s, as John Wayne was crafting a Hollywood mythos around the white Texas cowboy with films like The Searchers, Callies was helping his father with ranch work that paid less than $5 an hour. “I looked down and I said, ‘Dad’ — I was about 10 years old — ‘where are the white cowboys?’ My dad said, ‘Boy, they don’t have white cowboys!’” The Black Cowboy Museum is a personal articulation of this complex and still underrepresented aspect of Texas history.

A photograph of Callies was an early reference point for Mark Maggiori, whose painting Once Upon a Time is the newest addition to the permanent collection of San Antonio’s Briscoe Western Art Museum. The painting — which depicts two Black cowboys in a dusk-lit palette of parched frontier greens, yellows, blues and browns — was unveiled in late October for the museum’s seventh anniversary, with Callies, Maggiori, and Briscoe CEO Michael Duchemin on hand for the event. 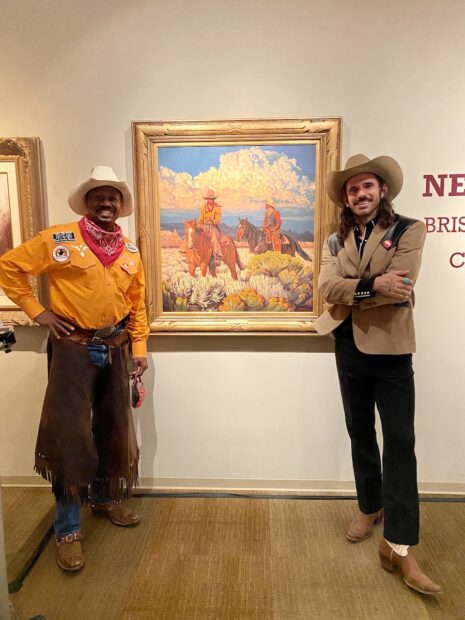 While the John Wayne version of the West still has a grasp on the popular American imagination, a new generation of Western artists like Maggiori is attempting to portray the West as it actually was: a multicultural, multiethnic space where Native, European, Black, Mexican, and Chinese people met in both collaboration and conflict. Maggiori places himself in a movement with LA painter Logan Hagege, whose work centers contemporary Native Americans in the Southwest, and Glenn Dean, who revives a landscape tradition popularized by late 19th/early 20th-century painters Edgar Payne and Maynard Dixon. “There’s [been] a renewal in style,” Maggiori says, adding, “and then the theme also — putting Black cowboys [in a painting] is a modern thing to do, unfortunately.”

Callies passes down an anecdote from one uncle, also a cowboy, who said that Black ranch workers would be excluded from official staff photographs for tax purposes; there are virtually no works depicting Black cowboys in the corpus of American Western art.

“Mark Maggiori has allowed us to open that door, to really begin studying that, looking at it, making an initiative out of it, and starting to tell a broader and more inclusive story,” according to Briscoe CEO Duchemin, who says that the museum has made a concerted effort over the last several years to reframe “the West” in a more representative way with its programming and acquisitions.

“Collectors that don’t see themselves in the story have less interest in being part of it. Hanging this one painting in the museum begins to let African-Americans see themselves in the story. It opens the door to hear Larry’s story, it opens the door for us to take a different view of a culture that’s been with us for a long time, and understand the role that diversity played in that culture and in that history.” 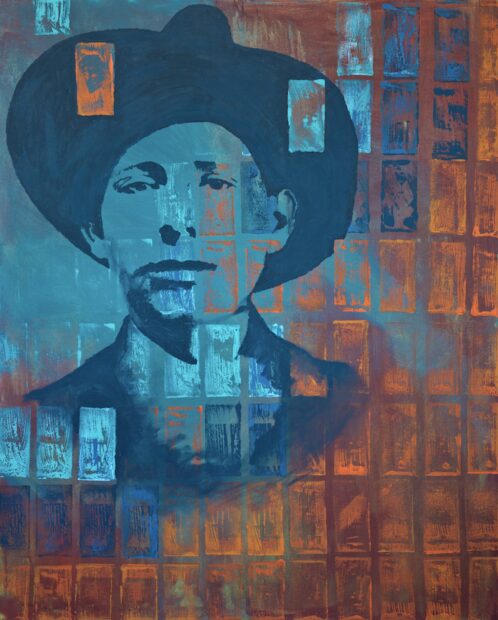 Like African slaves, the Chickasaw were forcefully relocated from their ancestral home in the American Southeast to the Western frontier with Andrew Jackson’s 1830 signing of the Indian Removal Act. This traumatic event is a theme processed in several of the works in Visual Voices, a complicated yet crucial part of the story of the American West and its representations in visual art. 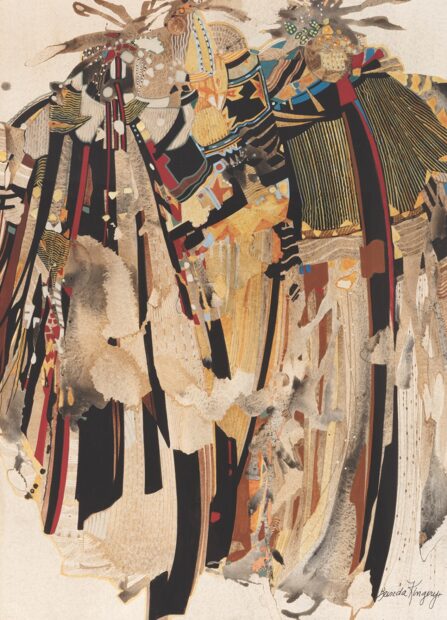 By expanding representation both in terms of the artists it exhibits and the subjects that appear in its permanent collection, the Briscoe is making an argument for the importance of shared myth to American cultural cohesion, a lack painfully felt in today’s fraught political atmosphere. “The myth of the West has been under attack to some extent, but myth doesn’t ever go away, it just gets reformed,” says Duchemin. “The myths of the ‘50s are replaced with the myths of the 2020s… . This is our moment in time. We’re part of a shift in time, and all of us have an opportunity and a responsibility to help manage that for all of our audiences.”

There are several signs that this shift is underway. Duchemin notes that the controversy surrounding the removal of Confederate statues in Charlottesville, North Carolina is a part of the same process as creating space for Black cowboys in the canon of Western art. And Callies likes to tell visitors of the Black Cowboy Museum the story of Bass Reeves, who was born a slave and, according to some accounts, fled captivity after striking his master, lived among the Cherokee, Creeks, and Seminoles to avoid capture, and eventually became the first Black deputy US Marshal.

The Bass Reeves story is referenced in the opening scene of the 2019 HBO series Watchmen, woven together with another traumatic episode in the history of the American West: the 1921 Tulsa race massacre, in which deputized mobs brutalized one of America’s most prosperous Black communities.

Callies calls Bass Reeves the “real Lone Ranger,” the true-life lawman who’d inspire a whitewashed TV version in the 1950s. Callies’ mission today is to increase awareness of the role of Black cowboys in shaping one of America’s foundational myths. “If I hadn’t opened [my] museum, I don’t think that it would be shifting like that,” he says. The feedback he gets from young visitors bodes well for the stated goal of the Briscoe, as well as painter Maggiori, to update America’s mental image of what a cowboy was, and what it can be in the future. “They go back and say, ‘Hey man, there were Black cowboys back then?’” Callies reflects. “‘Let me try to rope.’ That’s what gets the Black cowboys out there now.”

Visual Voices is on view through January 18, 2021 at the Briscoe Western Art Museum in San Antonio. Once Upon a Time will be on view in the Briscoe’s first-floor New Works Gallery until February, at which point it will move to the third-floor Dolph Briscoe Gallery, which features art depicting working cowboys.

Marvelous “story” and informative history about the West and “the Black man’s influence in it.
I just happen to already be aware of the intrinsic history of Black man and his family in American Western History…My beloved Great Great Aunt’s early days, as a young married woman, living in what is called the South Park region of Western Colorado in the years of the 1900’s…in that her husband, who was 45 years her senior, employed and valued the “Black Man/Cowboys” strength, dependability and contribution to “his” growing cattle ranch…