They Ain’t Marlboro Men: Another “New West” at the Briscoe Museum 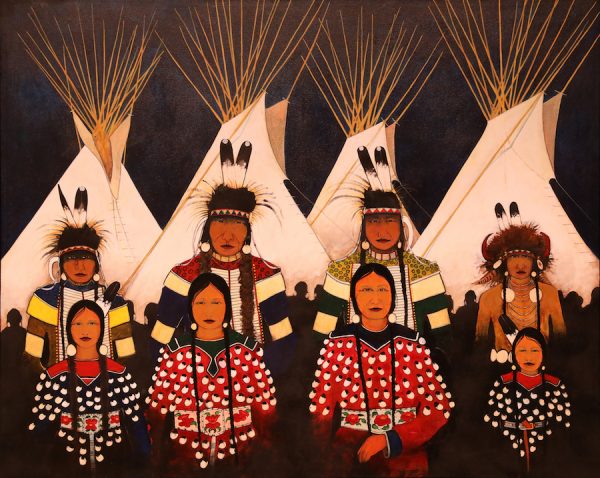 “Beginning in the closing decades of the twentieth century, the Old West and its attendant mythologies have repeatedly been challenged… .” Thus wrote the Goetzmanns, William H. and William N., in their fine 2009 art history volume, The West of the Imagination. The Goetzmanns cited the Smithsonian’s controversial 1991 exhibition, The West as America, Reinterpreting Images of the Frontier, 1820-1920, as the culprit that opened the floodgates of historical revisionism. But they might have pointed back to 1893, when Frederick Jackson Turner opened his big mouth to opine that the frontier had been officially wrassled and subdued, consigned to the bucolic back forty of American memory.

They could also have looked to the seismic culture shifts of the 1960s, when contemporary Native American artists began exploring new frontiers of their own. Describing a 2015 exhibition probing Native artists’ fusion of “indigenous themes with modernist techniques,” the Peyton Wright Gallery of Santa Fe observed, “The unique result was the depiction of iconic imagery by means of an avant-garde painterly vocabulary, producing works whose rawness and directness pack a visual punch.” Though it also includes non-Native artists, there’s plenty of said visual punch in the current exhibition, Into a New West, at the Briscoe Western Art Museum in San Antonio. Museum president and CEO Michael Duchemin curated the show of 50 works from the collection of the Booth Western Art Museum of Georgia, supplemented with a few pieces from the Briscoe collection. Duchemin deploys themes of environmentalism, social commentary, feminism, nostalgia, and looking “beyond the West” to underscore the ‘60s as a “turning point” for Western art, when both Native and non-Native artists began to “branch out from traditions of documentary or romantic realism.” There’s plenty of cowboys in the show, but they ain’t exactly Marlboro men.

Into a New West also highlights the still-evolving legacy of Santa Fe’s Institute of American Indian Arts (IAIA). After the college’s founding in 1962, a national search for young, indigenous talent drew the first year’s students from reservations and communities all over the country. One early class member, Alfred Young Man, later wrote that his fellow students spoke some 87 languages. A Cree from Montana, Young Man described the college as “a United Nations of Indians.” Instructors urged them to embrace tribal traditions while studying European, American, and Asian art history and opening their own formative art-making to more contemporary influences.

Another student in that first year of classes, Kevin Red Star, a Crow from Montana, is represented in the Briscoe’s New West with a mixed-media work, Ready for the Two Step [pictured at top]. A traditional pow wow dance, the “two step” is unique not only because it is one of the few Native dance forms in which men and women dance as partners, but the women choose their partners. Behind the four couples clad in traditional regalia, silhouetted figures loom from within the light-filled tipis, perhaps representing ancestors who are keeping a wary eye on the paths chosen by a younger generation. 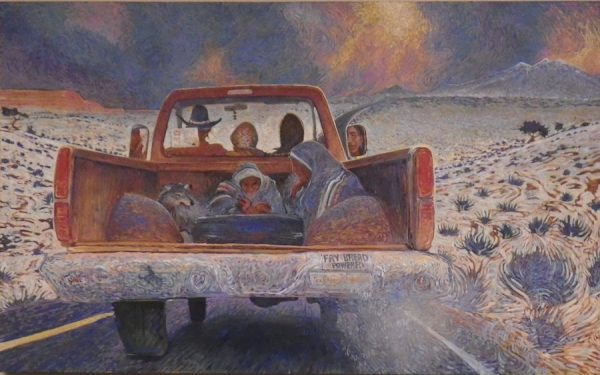 Another IAIA graduate represented in New West, Shonto Begay, was born in a hogan in the Navajo Nation. His mother was a traditional rug weaver and his father a medicine man. Before he attended the IAIA, Begay was forced by the government to leave his family sheep camp to attend Bureau of Indian Affairs boarding schools. In his New West piece, the acrylic painting Our Promised Road, Navajos in a pickup truck ride to a ceremonial event, the sacred San Francisco Peaks rising in the background. 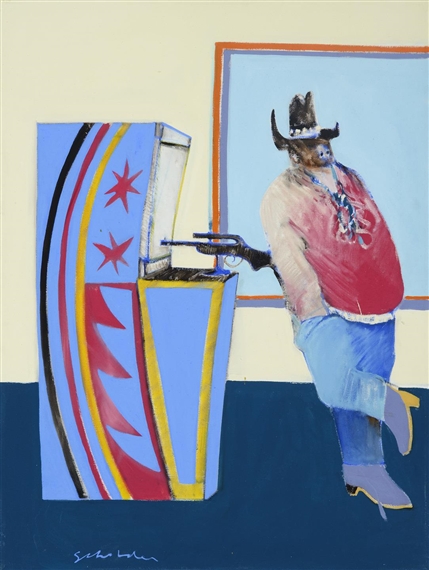 One of the most influential figures at the IAIA, the late and still-controversial Fritz Scholder, who taught at the college from 1964 to 1969, is credited — and sometimes blamed — for a great deal of Western art’s retooled aesthetic. Scholder was a quarter-blood enrolled member of the Luiseño tribe of California Mission Indians, but according to his biographies he didn’t really consider himself a Native American and vowed that he would never paint an Indian subject. Reportedly frustrated by students’ reluctance to burst romantic clichés in their own Native portraits, he painted Indian No. 1 in 1967. While not as distorted as his subsequent portrayals, the work presages the artist’s future output, in which a procession of Indian figures often seem to have wandered into the ghostly wasteland of a Samuel Beckett photo booth. The boldly colored body of First Peoples’ portraits he went on to paint includes the sad and tragic, depicting Indian alcoholism and poverty, such as his 1969 work, Indian with Beer Can. But it also included the quirky incongruities of modern Indian life, exemplified in his 1971 painting, Super Indian No. 2, in which a ceremonial dancer sits wearing a buffalo headdress and holding a double-dip strawberry ice cream cone. Other works, however, such as the aquatint lithograph Sioux War Party, while still abstract, read as much more straightforward presentation, even to the point of evincing traces of that evil romanticism. In New West, Scholder is represented by the 1969 oil painting, Indian at Gallup Bus Depot, in which a hulking figure, perhaps descended from a distant line of proud resistance fighters, is reduced to looming over a faux weapon attached to an arcade game. 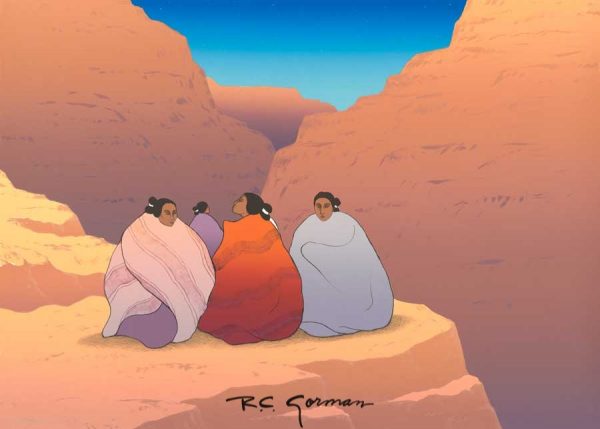 Another major Native artist, the late R. C. Gorman, is represented in New West by his serigraph, Twilight at the Grand Canyon. Gorman was raised in a Navajo hogan, and his father reportedly served as one of the 29 original Navajo code talkers in World War II. 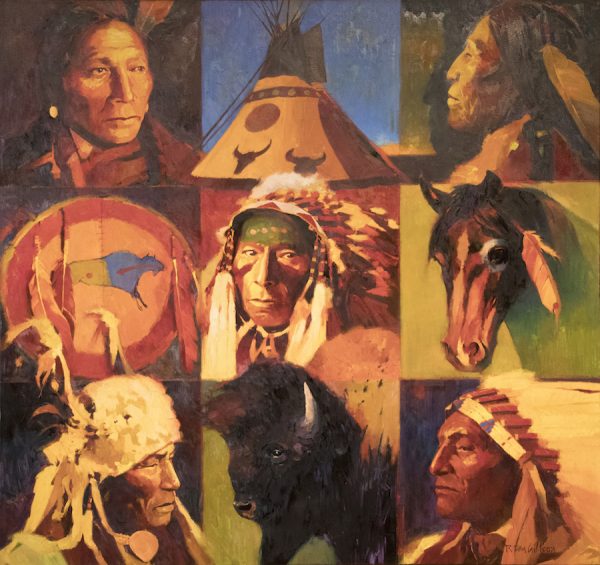 Montana artist R. Tom Gilleon grew up in Florida with a full-blood Cherokee grandmother whose family had refused to trek the Trail of Tears. Though Gilleon could legitimately claim Native ancestry, he seems to view it from a respectful distance. “Being in a place like [Montana] makes you appreciate the Native American way of life,” he says. “They didn’t stand outside of the natural world looking in. They were part of it. My work is largely an attempt to bridge the gap between their way of life and ours.” 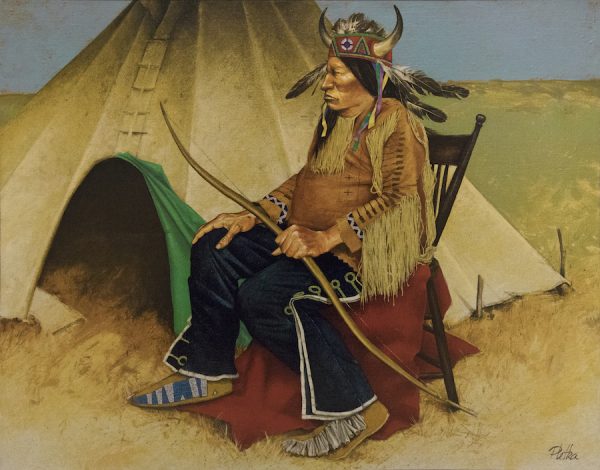 Among the Anglos in the show, Paul Pletka has offered this gentle confession: “When I was a youngster and first enchanted with Indian costume, lore and artifacts, I would sometimes pretend I was an Indian. I soon realized that was not intellectually reasonable. I am not an Indian. I am simply an interpreter.” His Booth/Briscoe acrylic Mescaleros – La Silla Negra, while providing a nifty turn on the intrusion of the white world into that of the First People, only hints at the richness of a life’s work by one of our finer interpreters of not only Native life but also Southwestern and Mexican religiosity. Pletka definitely emerged from my visit to New West as an artist about whom I intend to learn more. 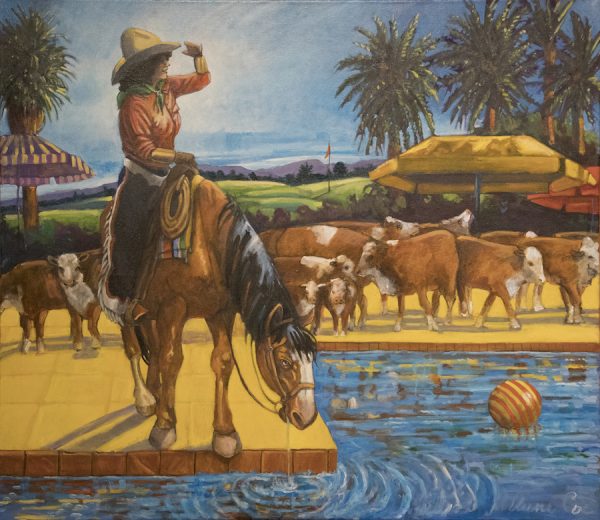 Other pieces, while peppy, offer commentary on the changes to the Western landscape and way of life that runs a bit more stock-ish. Anne Coe’s 2017 acrylic Suburban Ranchette: The New Watering Hole depicts a cowgirl on horseback with a small herd of cattle that she has apparently driven through a golf course to a manmade swimming pool, from which her mount drinks. The folksy and flowing lines of Kim Wiggins’ 2003 oil, Fiesta Day on the Plaza, manage to capture both the magical aspects of Santa Fe and the aching nostalgia I feel for a place first visited in the 1950s. 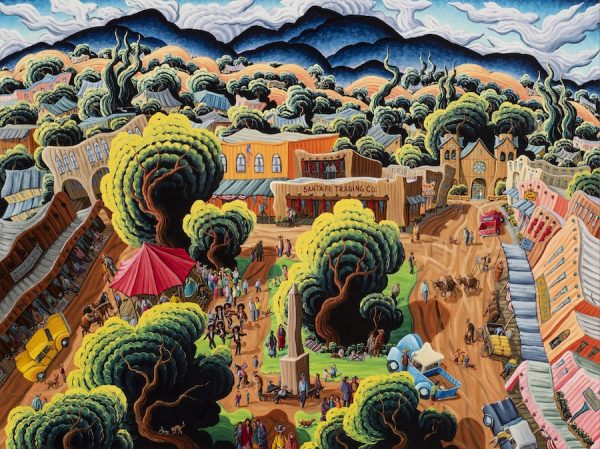 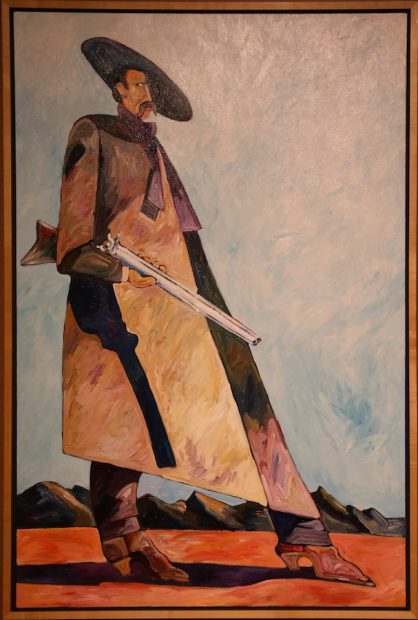 Thom Ross’ angular acrylic Doc Holliday looks to have escaped from True West magazine by way of the Fabulous Furry Freak Brothers. I would love to have seen his lifesize plywood cutouts that re-created a photograph of Buffalo Bill’s Wild West, installed in front of the Cliff House at Ocean Beach in San Francisco in 2008. And Bob Wade’s hand-colored enlargements of vintage cowgirl images on photo-sensitized linen are always big fun. 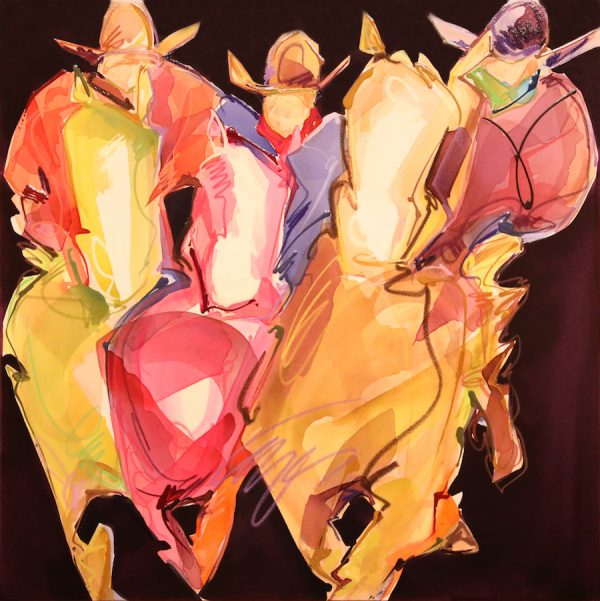 Carrie Fell seems to have rolled a watercolory signature style of oils and acrylics into a full-tilt branding machine with her faceless Westerners. I’m a sucker for long-gone/almost-gone motels and signs, and Laurie Stevens tickled me with her oil painting Motel Galata. With her 2001 mixed-media work of pastels and charcoal on board, Not Without Its Ups and Downs, depicting a joyous cowgirl levitating from the back of a bucking bull, Donna Howell-Sickles corrals the feminista dimension of New West. Tiny Saint Jo, northwest of Denton, where Howell-Sickles runs her studio/gallery, is among the Wild-West-iest Texas towns I’ve seen. 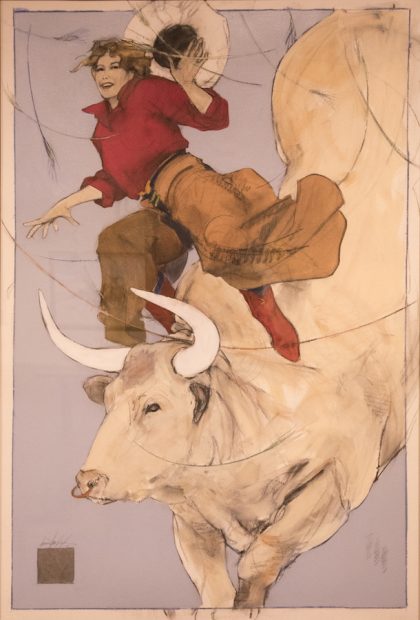 Donna Howell-Sickles, Not Without its Ups and Downs

How new is this New West? Michael Duchemin says he hopes museumgoers will realize that Western art is not uniformly relegated to relic status and that vast horizons of the genre continue to evolve. And while it may not be the edgiest art exploring the West, Into a New West certainly accomplishes that. The best parts of the show remind one of the admonitions of photographer Robert Adams, whose 1974 project The New West earned the Goetzmanns’ condemnation as “disingenuous.” Instead of shooting the usual marquee-glamor views of Monument Valley or the Grand Canyon, Adams photographed the rude intrusions of space-age urban sprawl into former wilderness. And while the images of tract homes and tacky shopping centers on the fringes of civilization were intended to assault our sensibilities, they also framed the grandeur of a vast and still-untouched terrain that lay beyond. Though one might wonder if he has ever seen a strip mine or other such geo-abomination, Adams himself put it this way: “All land, no matter what has happened to it, has over it a grace, an absolute persistent beauty.” And in that sense, the West will never be “won” by the hand of man.

‘Into a New West’ runs through August 31, 2019 at the Briscoe Western Art Museum in San Antonio.